This is WWII model of Levi's 501 boys and youth model, lot number is 503XXB instead of 503BXX, and "S" of "simplified" is added before it. The rivets on the coin pocket are omitted, and the arcuate stitching on the back pocket is printed instead. The arcuate stitching on the print fades away quickly, and there are few used ones left, but this one still has a faint print as if it had been washed a few times. The fabric is clearly darker than its predecessor in the WWII period. This is relatively early among the Great War era ones, based on the front buttons and rivets, I would guess. 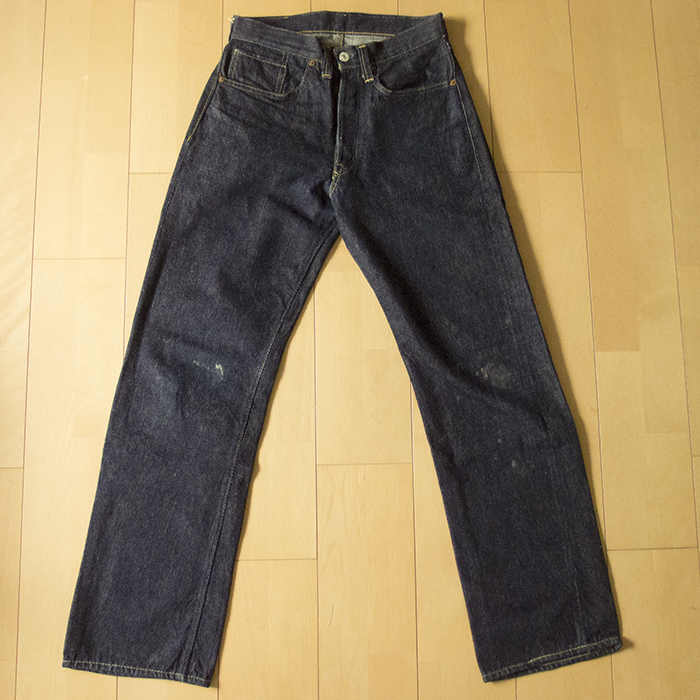 The length is a little long, so it's hard to tell when you look at the whole thing, but it's thick and straight. I have a strong impression that the color of the indigo is black rather than dark

Unfortunately, the leather patch has come off. 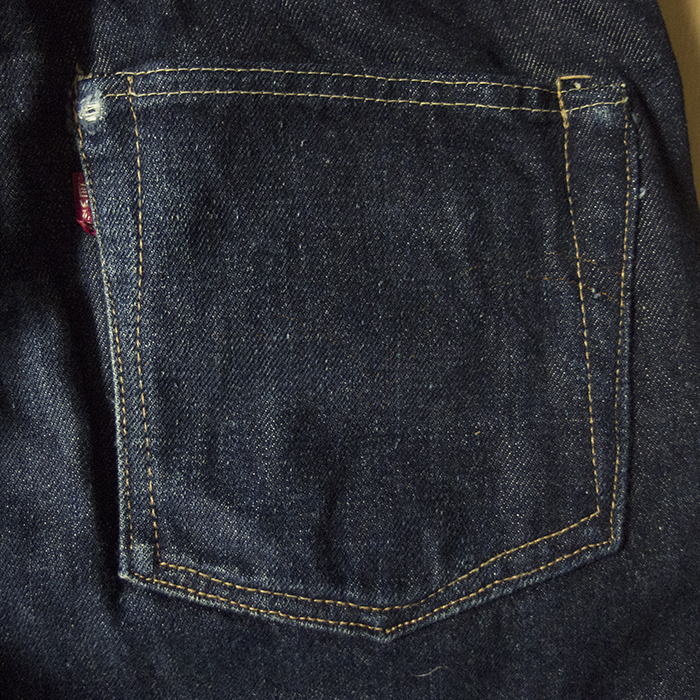 Right back pocket. At the edges, the arcuate print is still faintly visible. The stitching around the pockets is quite disorganized, which seems to be WWII model. 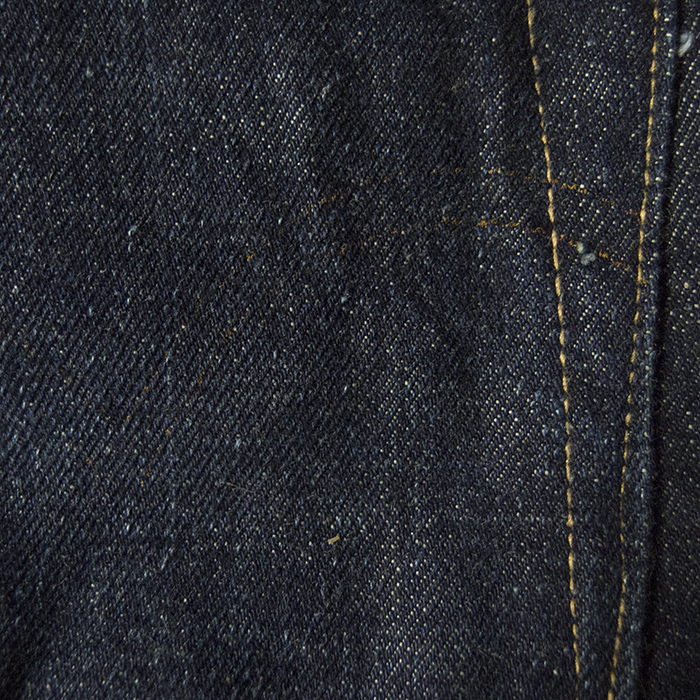 Enlarged view of the remaining part of the arcuate print on the right back pocket. The orange print is still there. If you wash it again, it might fall off. 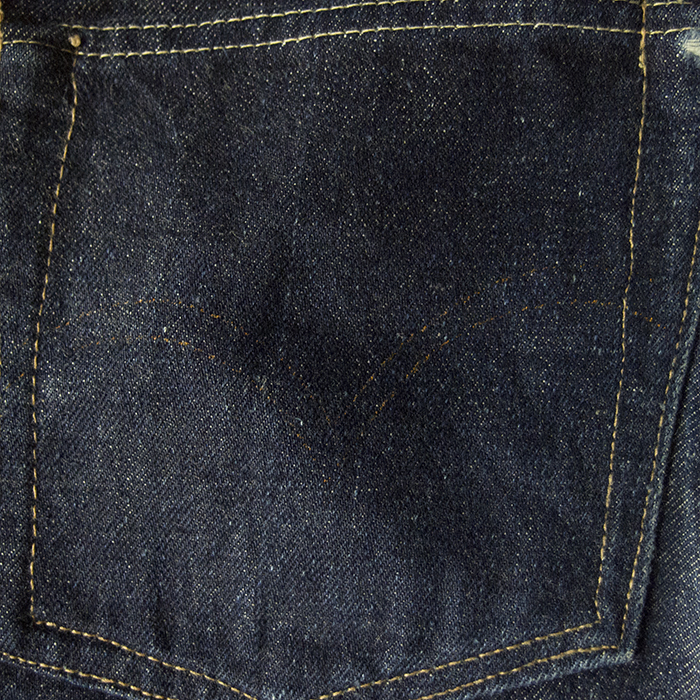 Left back pocket. This one retains the arcuate print throughout. 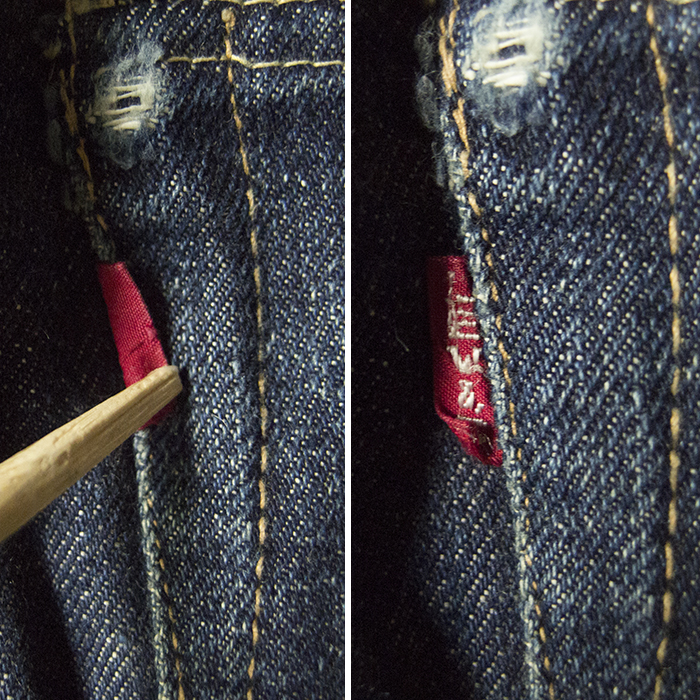 "LEVI'S" embroidered on only one side of the so-called single-sided tab. 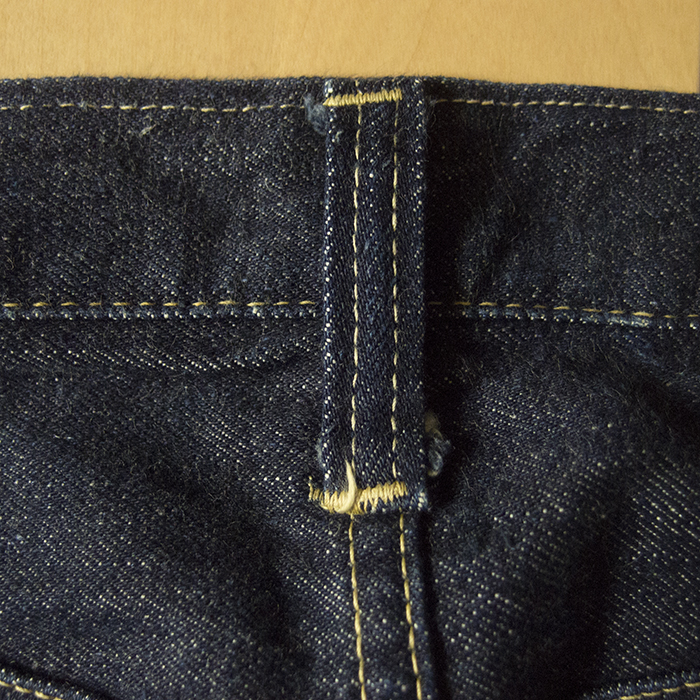 The belt loop in the middle of the back is attached to the top of the seam. Thick belt loops, 0.55 inch(1.4 cm) thick. 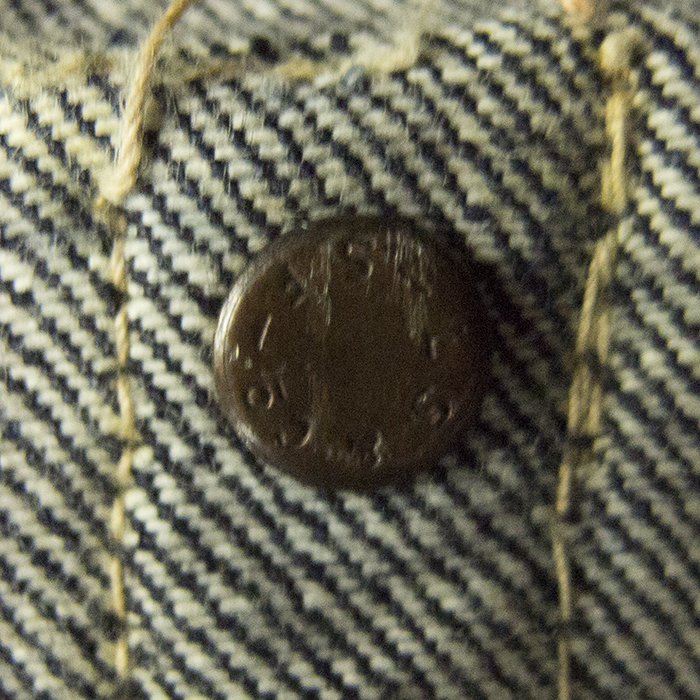 Conceal rivets that are thick and smooth at the edges." Inscribed with "LS&Co-SF-".

Plated iron top button, with no reinforcement such as V-stitching or parallel stitching.

It can be identified as a 503XXB by the fact that it has two fly buttons. 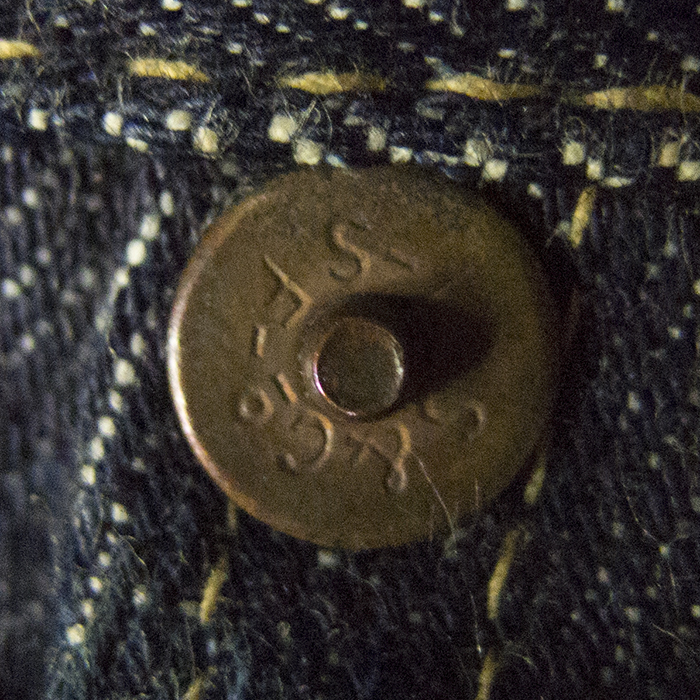 The rivets appear to be copper-plated iron. The "o" in the "co" used on pre-war models is replaced by a lowercase letter. 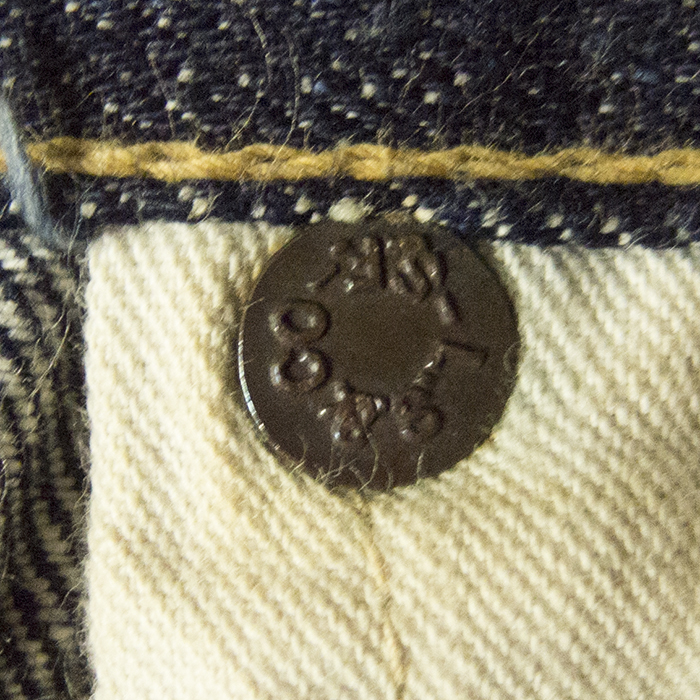 The back of the rivet appears to be copper-plated iron. 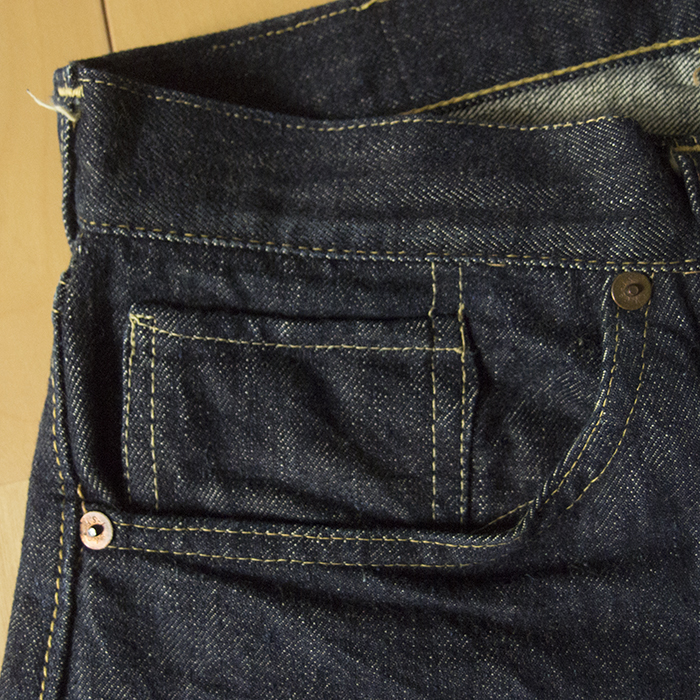 The rivets on the coin pocket have been omitted to reduce supplies. 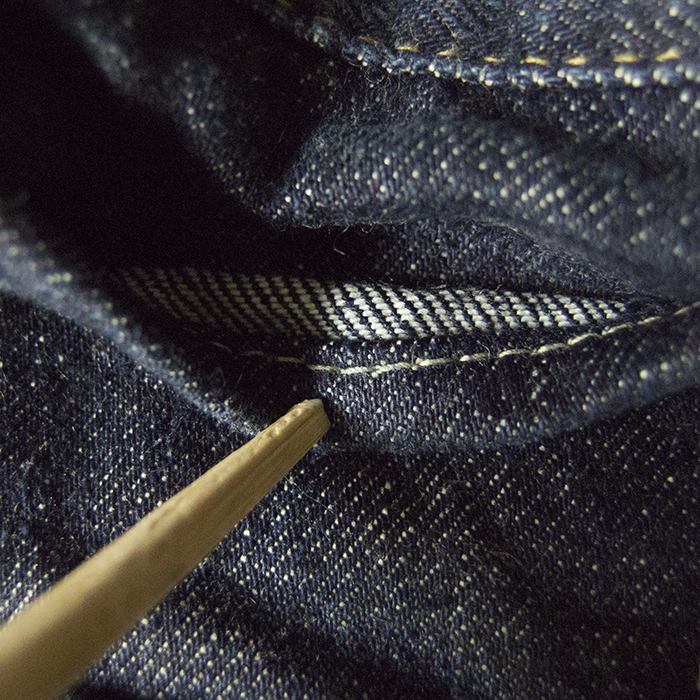 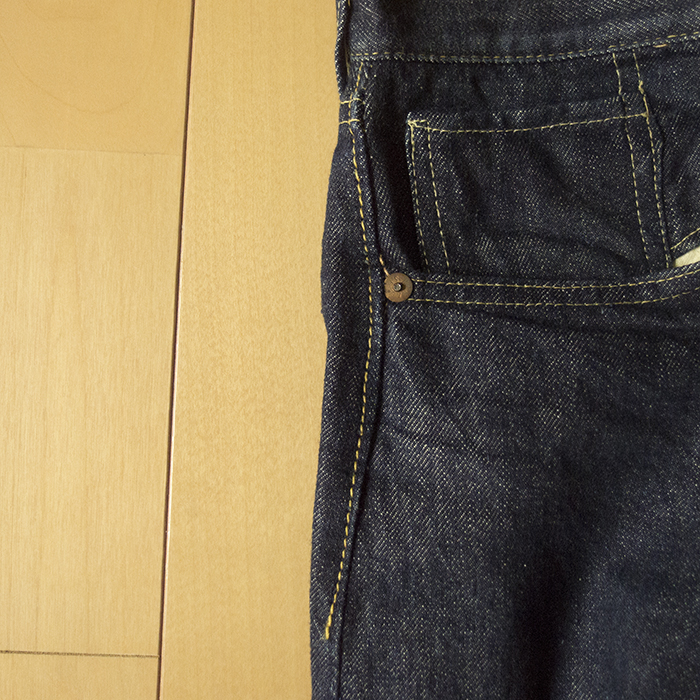 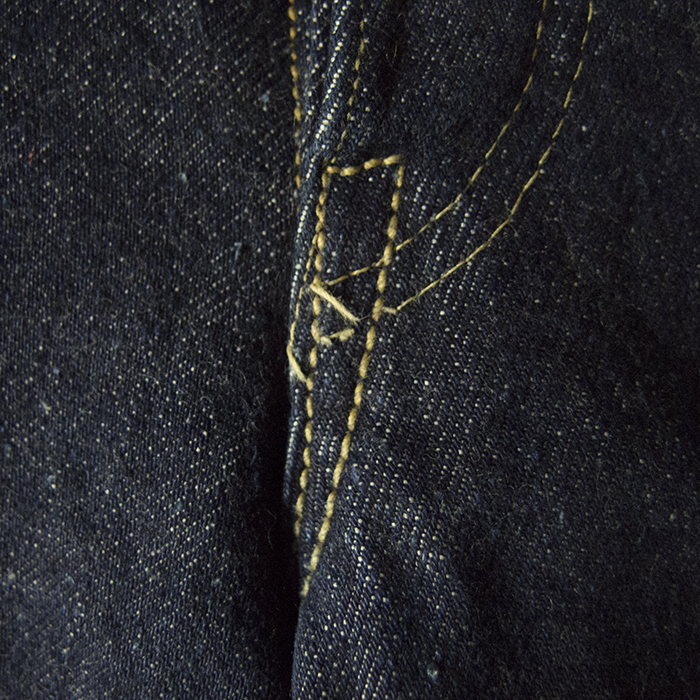 Reinforcement rivets were omitted due to the reduction in supplies. 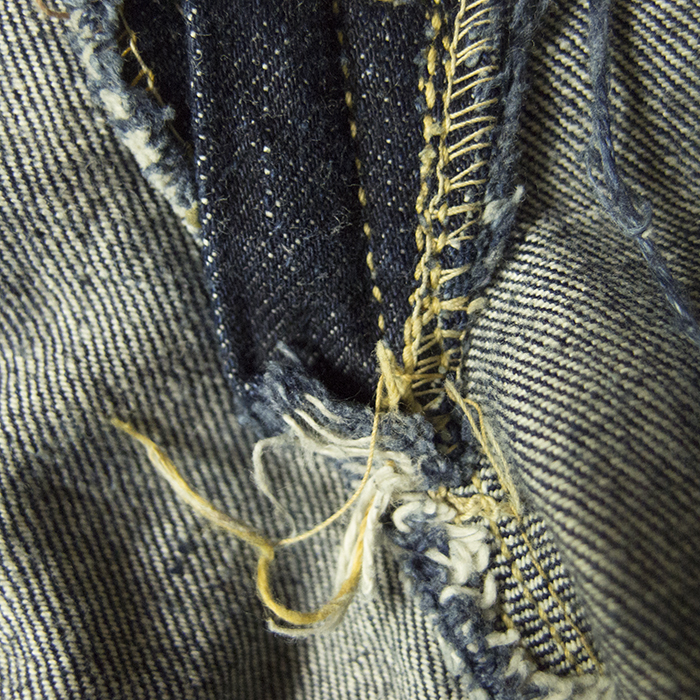 The lower end is truncated. Rather than being a feature of WWII model, the specifications continued from the model before this. 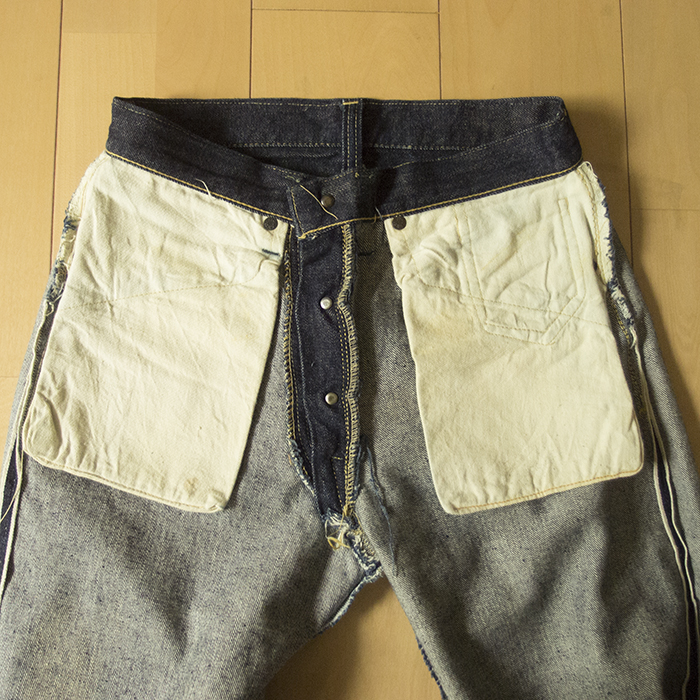 Both the left and right sides are made of a common sleek fabric. 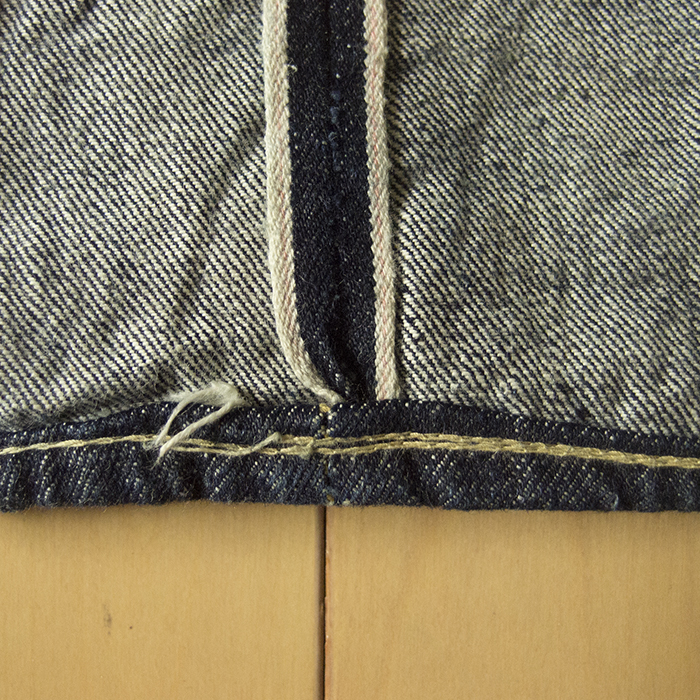 It seems to be WWII model that it is miscellaneous processed as shown in the photo. The pink of the ears is also faintly lingering. 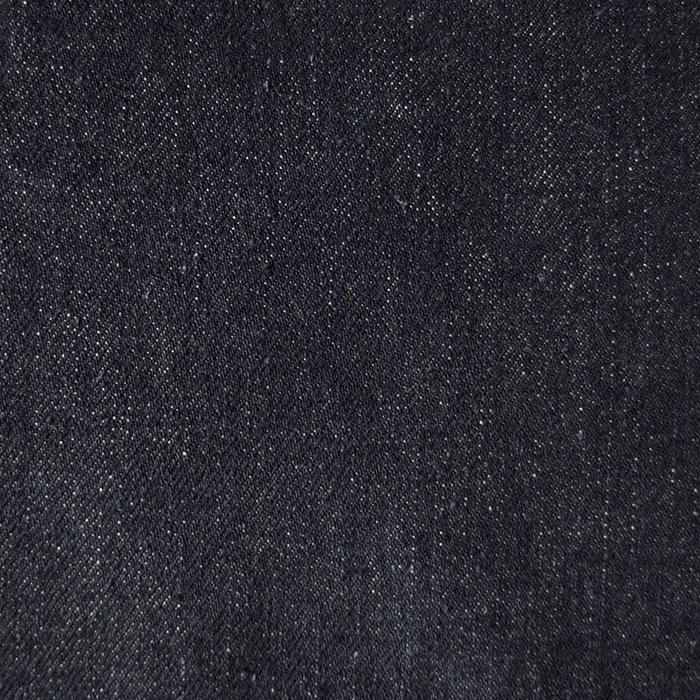 It is a state where the color remains less than 90%, but rather than the color of indigo being dark, the color of the feeling that black was applied on indigo. There is a strong sense of slub, but surprisingly little nipping.
HOME | Denim Archieves (in English) | Vintage & Old Denim Bottoms | LEVI'S S503XXB (WWII model)