From an era before the adoption of hidden rivets on the back pocket rivet stopper, which remained bare. From the size and the number of front buttons, it might be a youth version of 503XX (the model number is B503XX in 1922). It is called a 1922 model, it has the cinchback, suspender buttons, and belt loops, but without the red tabs. The 1922 model is said to have been made between 1922 and 1936, but it is presented here because of the relatively thicker fabric, the fact that it is stitched with chain stitch in many places, and the shape of the rivets, and it is a relatively older model (1927 or later?). Unfortunately, the cinchback has been cut, the suspender buttons have been removed, and there are many parts that have been repaired, but even in this condition, it is hard to find them now. 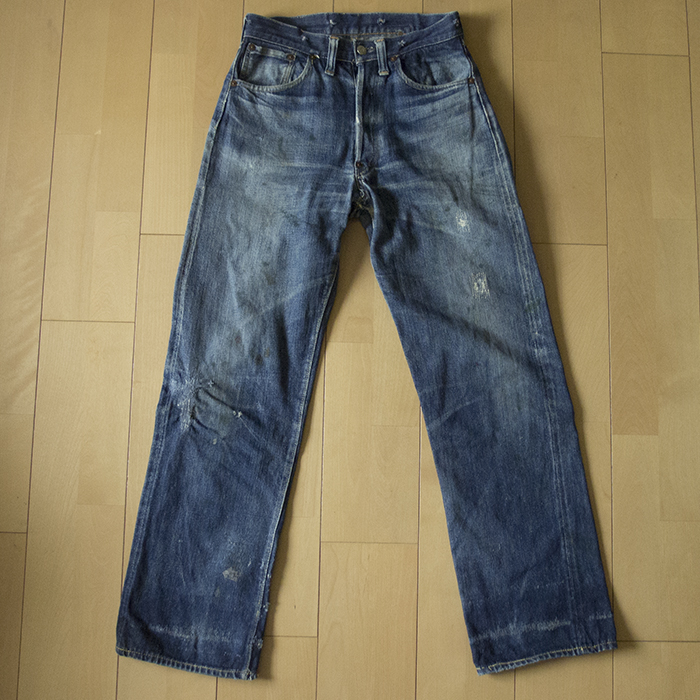 It's fairly thick and straight, falling straight down towards the hem. There is a lot of room around the waist. 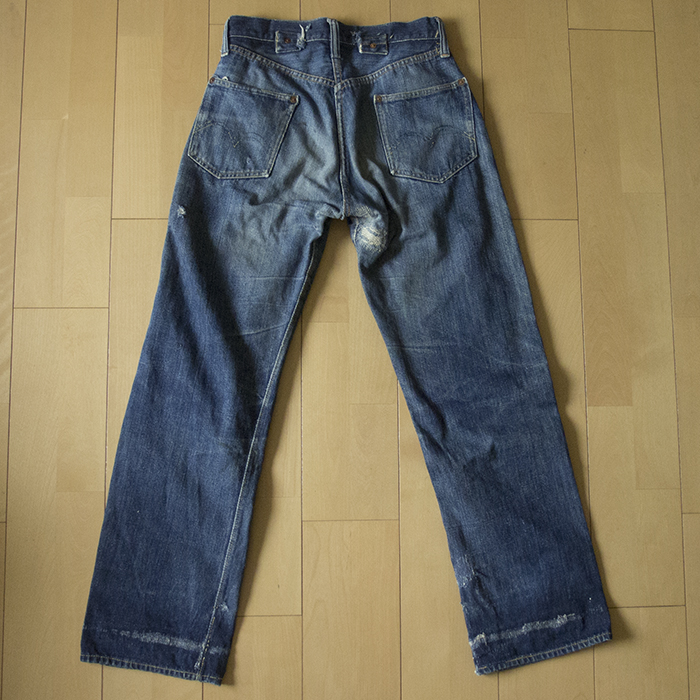 The leather patch has unfortunately come off. 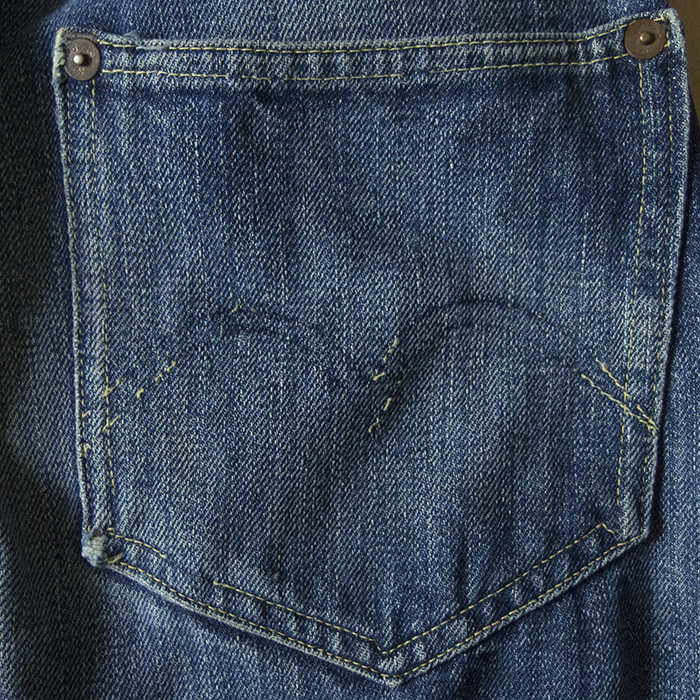 Slightly vertical back pocket. The top has been reinforced with rivets. The arcuate stitch has mostly disappeared. 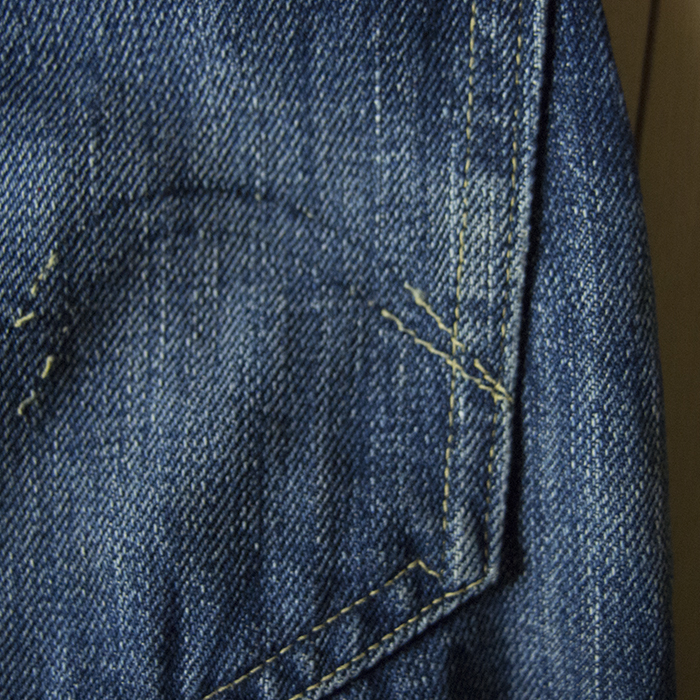 An enlarged photo of the arcuate stitch. You can tell that it was sewn on a single-needle sewing machine. 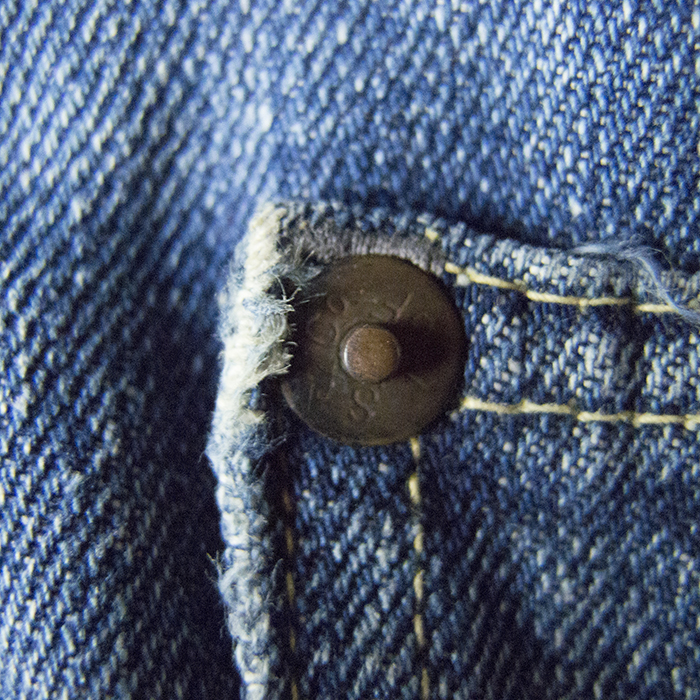 rivet (on back pocket）

The "o" in "Co" is a lowercase rivet. It is made of copper because there is no magnet reaction. 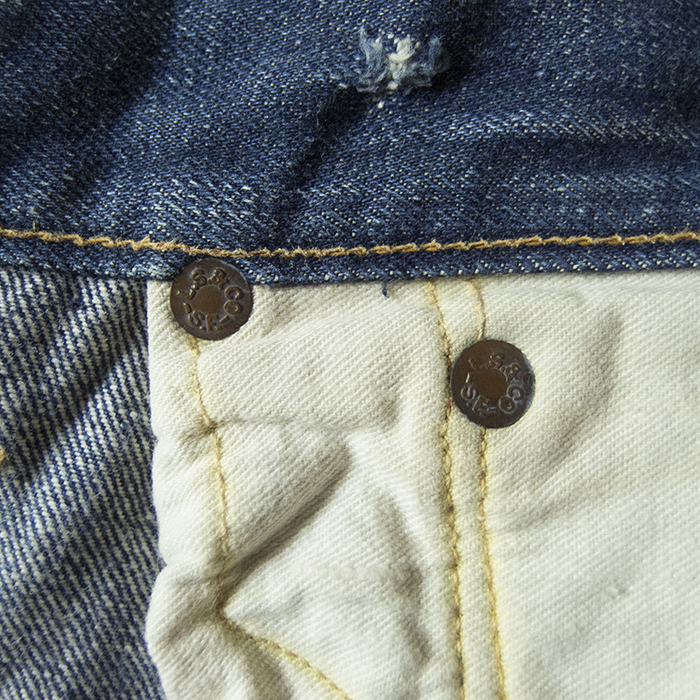 On the back of copper rivets magnet did not react. The hole at the top is where the suspender buttons were removed. 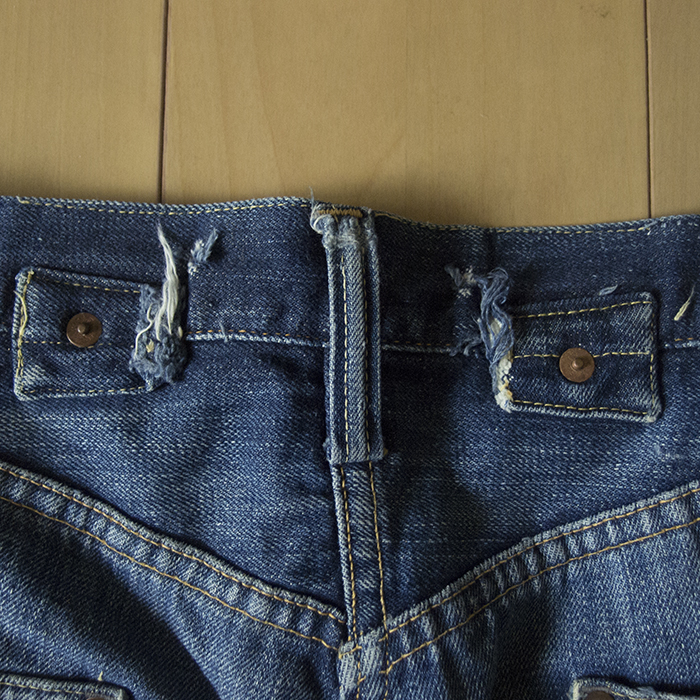 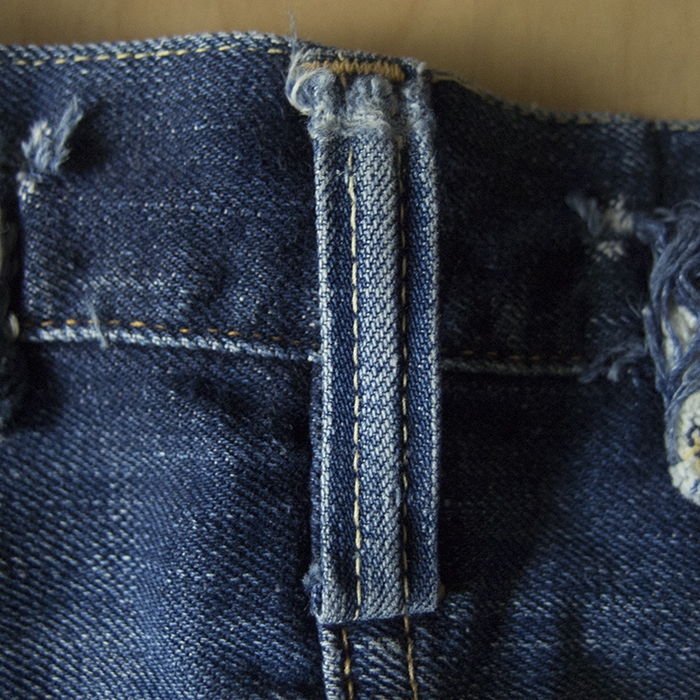 A belt loop at the center is attached to the seam. It's hard to tell from the photo, but it's a 2×1 light ounce of fabric.

Iron buttons. The letters are clearly imprinted. The top button is stitched in a U-shape rather than a V-shape or parallel stitch.

Other than the top button, there are two buttons, and combined with the small waist size, I'm guessing it's 503B, not 501.

The back of the top button is domed shape. It is made of iron. The chain stitching under the waist belt suggests that a mass-production sewing machine was already in use in some places. 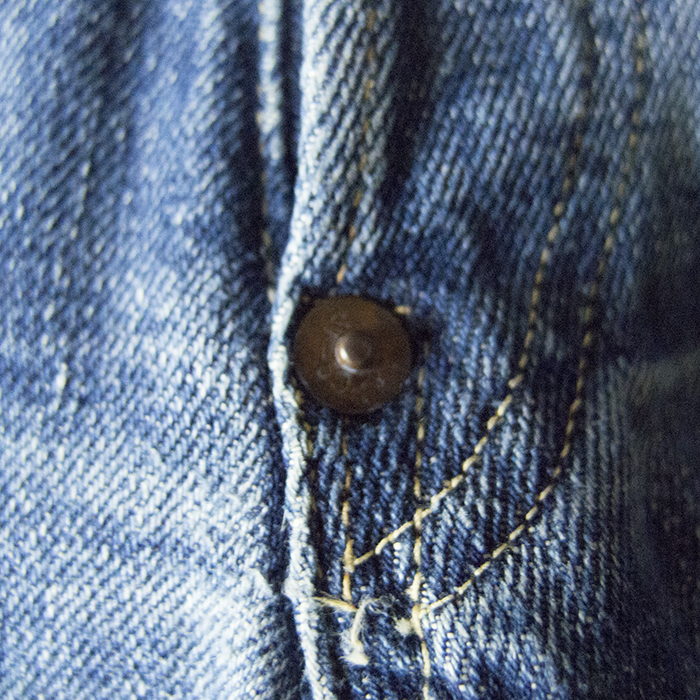 The rivets at the crotch. It was a detail that lingered until before the WWII model. Please note that the photo has been corrected to be slightly brighter. 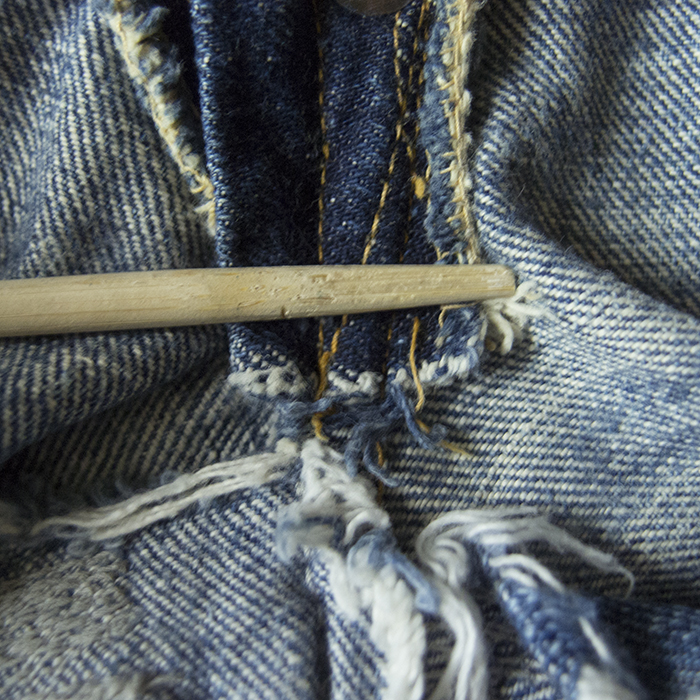 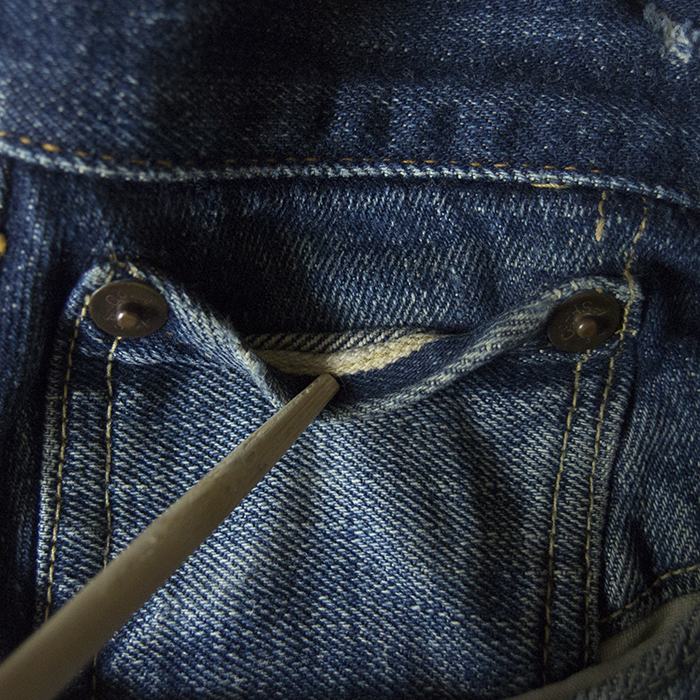 The cloth of the opposite side is slightly slanted. The coin pocket has a selvedge. 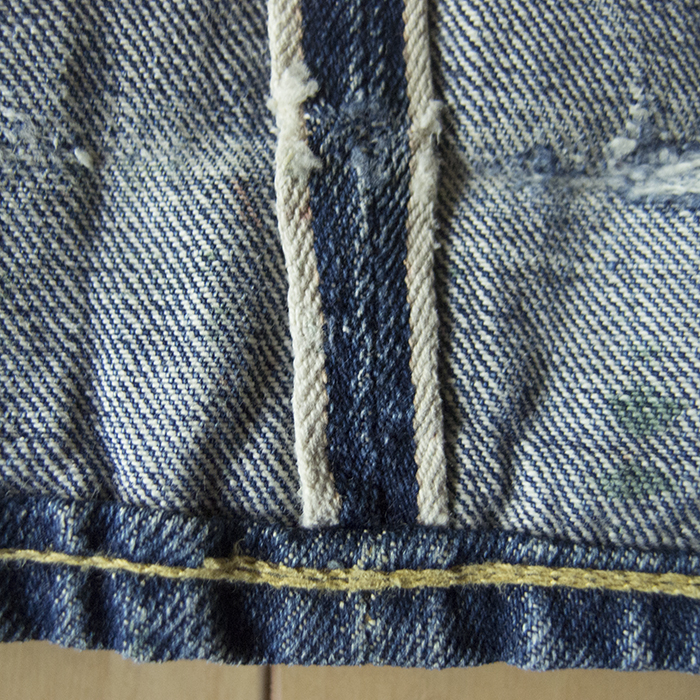 The selvedge is already fading. The hem is a yellow chain stitch for both the top and bottom thread. 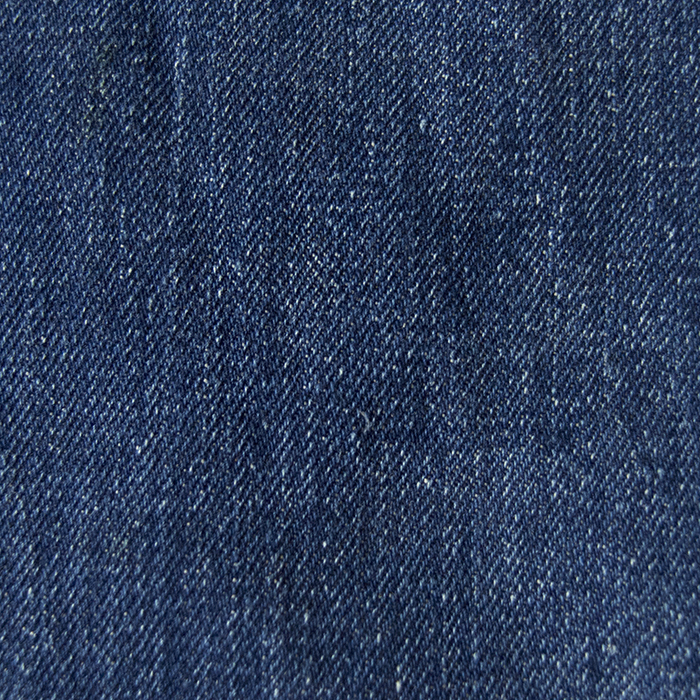 The area with the darkest remaining color. The grain is very noticeable and shows various expressions depending on the location, such as vertical fading, spot fading, and almost no white ground. At the time, I'm guessing that about 10 ounces of fabric was used before shrinking, but in reality, the fabric feels surprisingly thick. 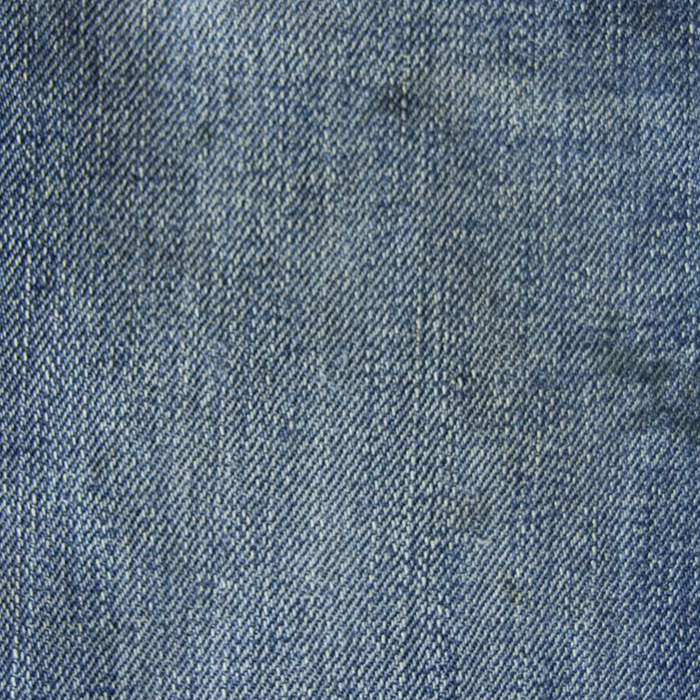 The area with the most fading. As the color fading progresses, vertical fading is noticeable, but the thickness of the fading varies, and there are spots where the color fading has occurred in spots.
HOME | Denim Archieves (in English) | Vintage & Old Denim Bottoms | LEVI'S B503XX (1922 model)