It's a 501xx Boys Youth model, this one with about 80-90% of color residue. The red tab is a "one-sided tab" and although the patch is missing, some pieces of leather remain. From the short stitching on the side of the waist and the engraving on the back of the top button, it is inferred that this is a relatively old model, even for a single-sided tab made in the period (1947-53 or so). Compared to the other single-sided tab, the 503BXX, orange stitching is used more frequently. 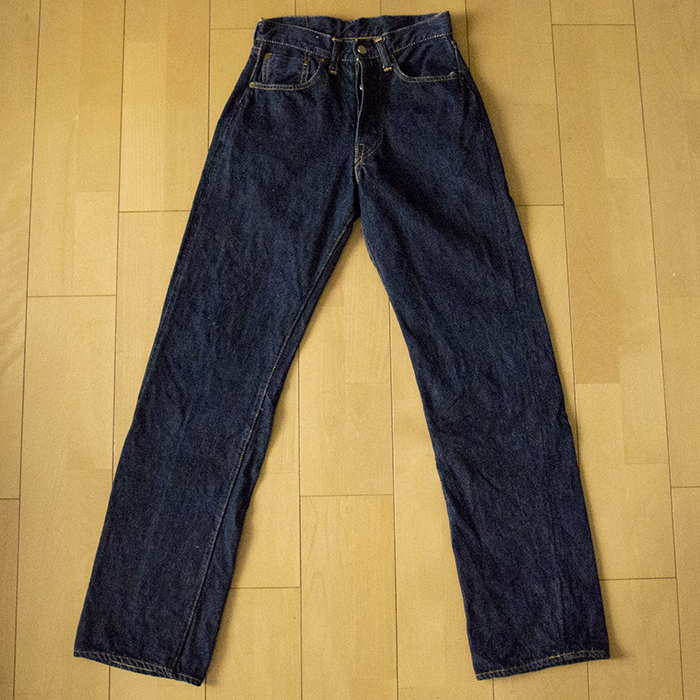 It's thick, falls straight, and has a fairly deep inseam. 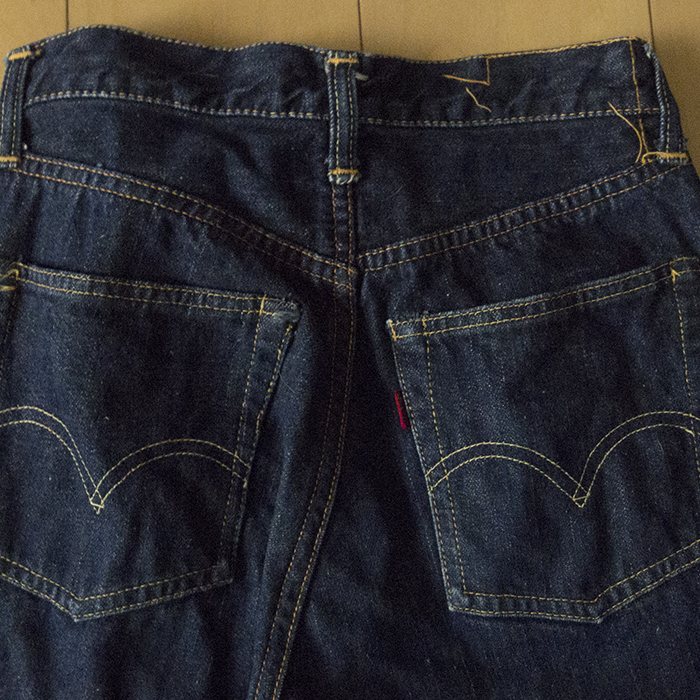 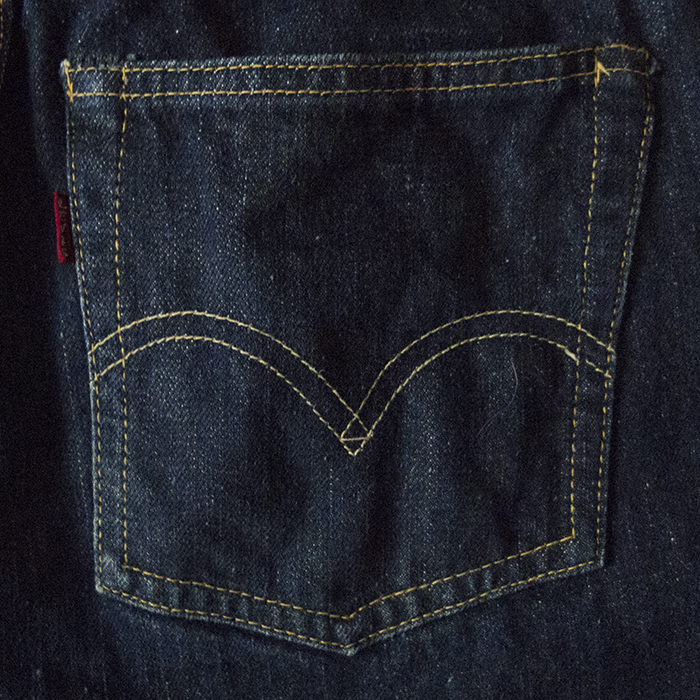 Near-square shape. Unlike the other single-sided tab, the 503BXX, orange stitching is used for all but the arcuate. The arcuate stitch depth is moderate, and the sides are nearly even. The stitches are starting to show some frayed spots early on. 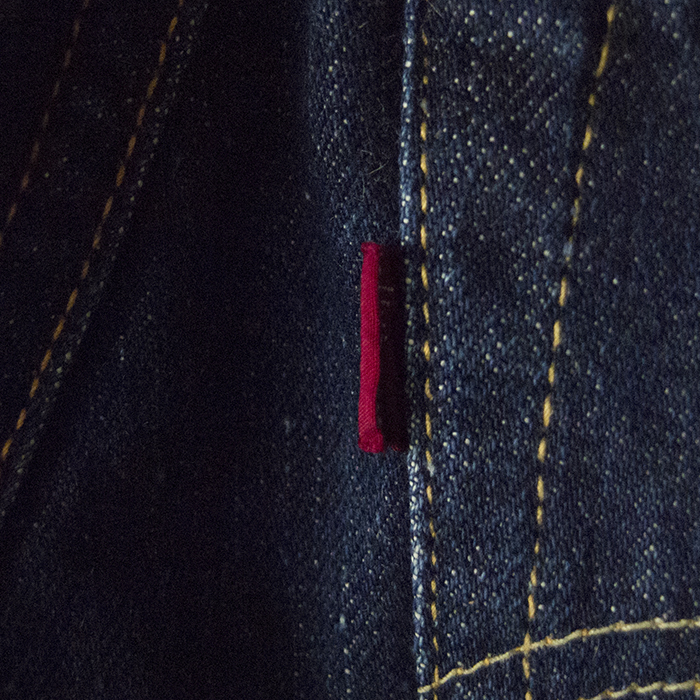 Single-sided tab with "LEVI'S" embroidered on one side only. 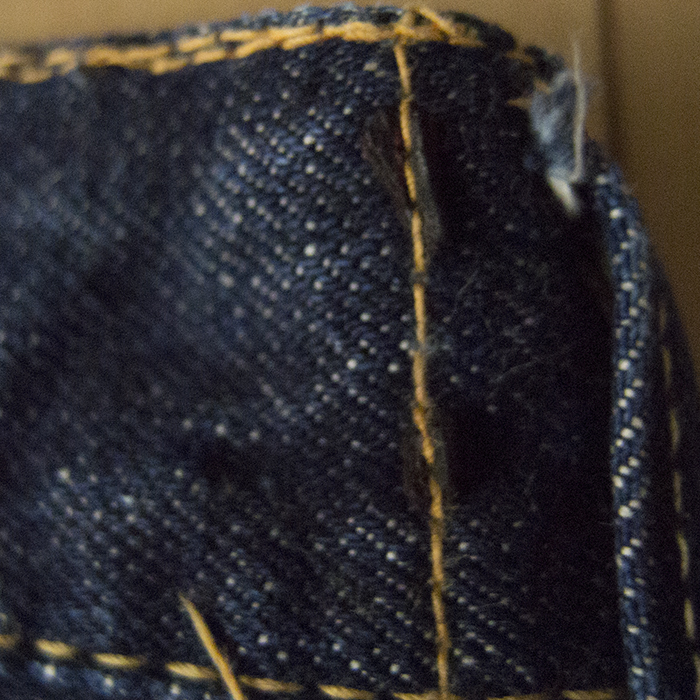 The patch is almost chipped, but there are some pieces of leather left between stitches. 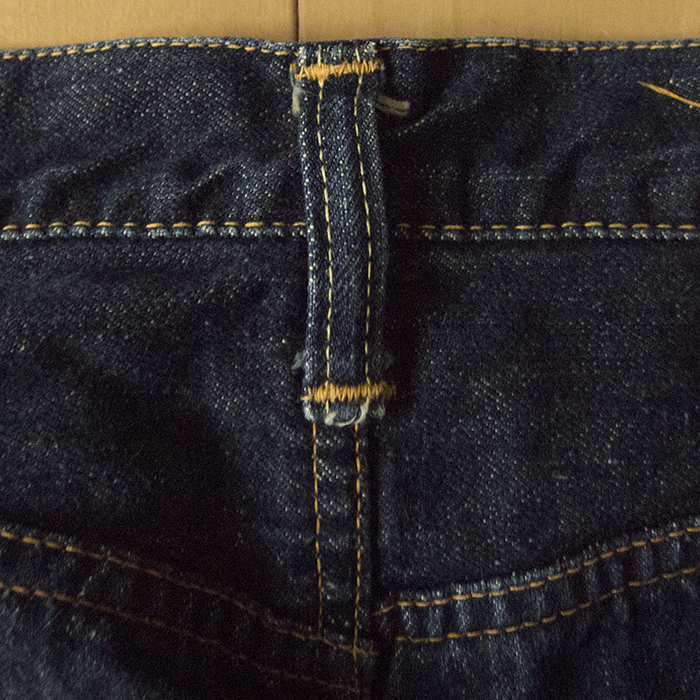 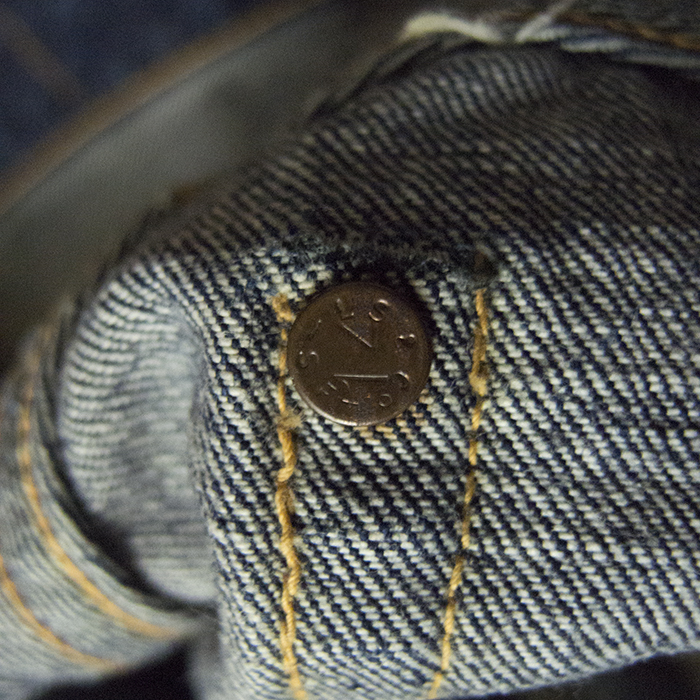 It's stamped with the number "14". It is likely to be made of copper-plated iron as it has a magnet.

Like the other single-sided tab, the 503BXX, it is made of plated iron with a magnetic response, and the surface is slightly inflated only in the center.

Since there are two buttons except for the top button, we can identify it as 503BXX.

It is likely to be made of plated iron due to the reaction of the magnet. It features a rustproof lemon yellow paint. The rest of the text is flat.

It is made of iron and slightly swollen at the center. The bulge is somewhere in between what is said to be a domed type and a flat type." It is stamped "14". 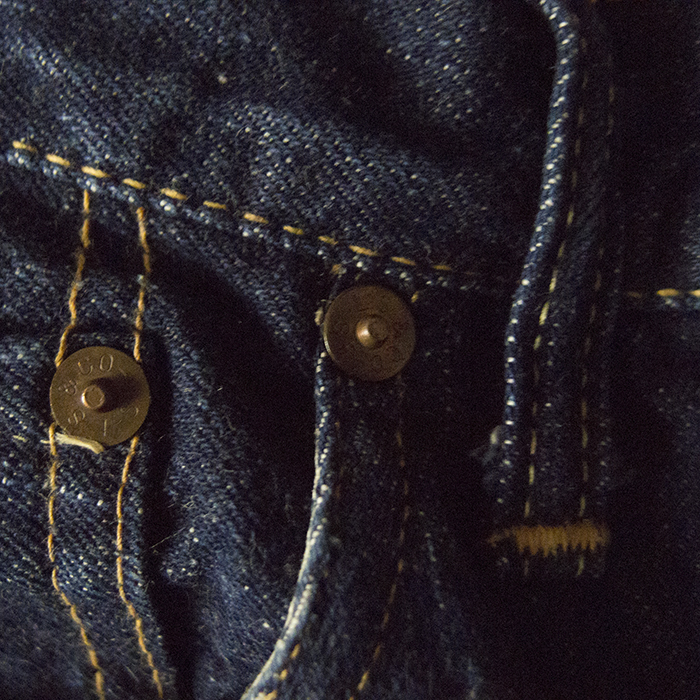 The "O" is a capital letter. The characters are large and not centered. Since there is no magnet attached, we can assume that it is made of copper. 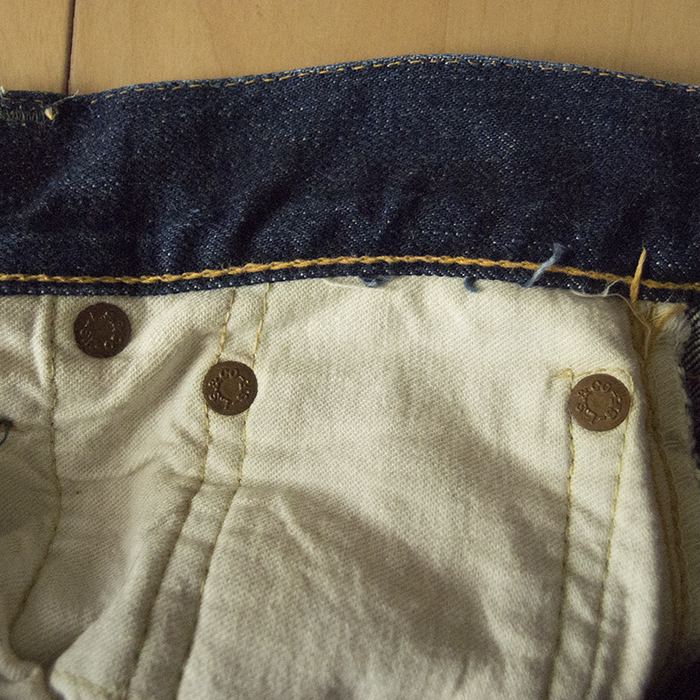 The back of the rivet is also not reacting to the magnet, so it is likely to be made of copper. 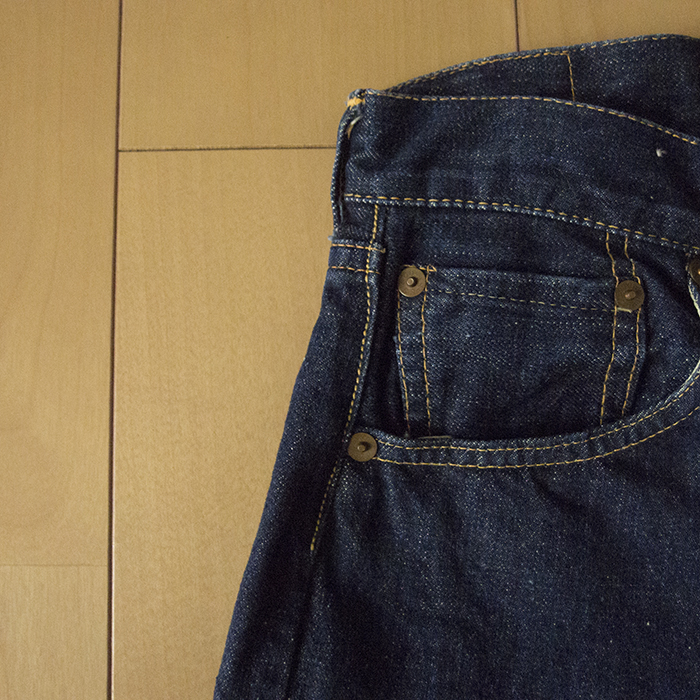 The single-sided tab moedl is said to feature long side stitching, which is short at 4.5inch(11.5 cm). 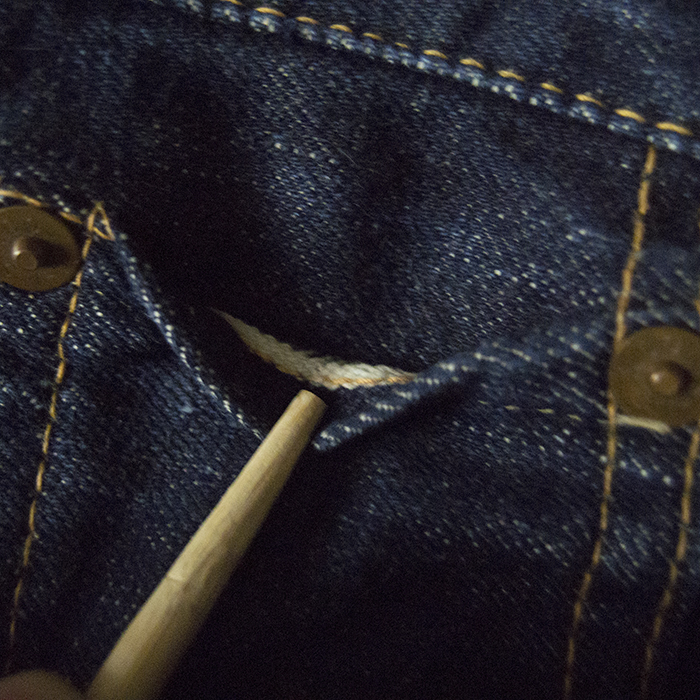 Selvedge part is used. The fabric is used horizontally for both the coin pocket and the other cloth. 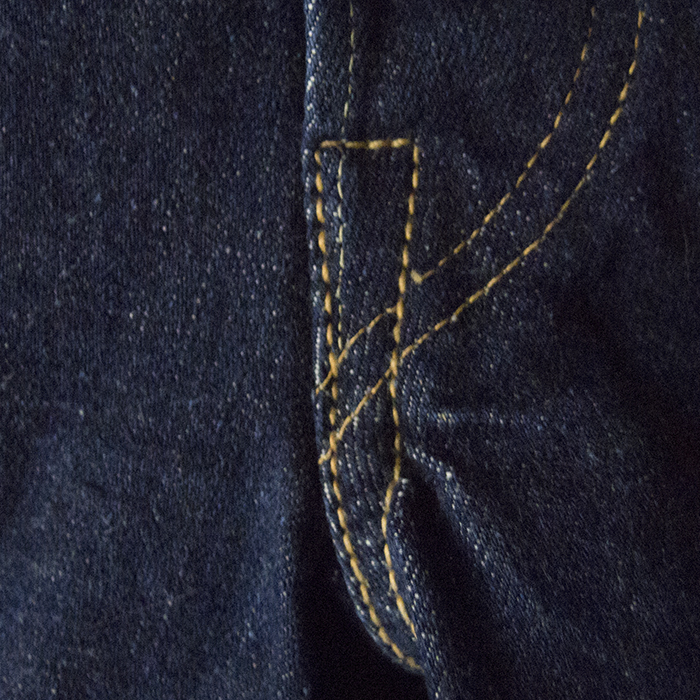 Stitched with thick orange stitching, but without the cannibalization at the specific wing. 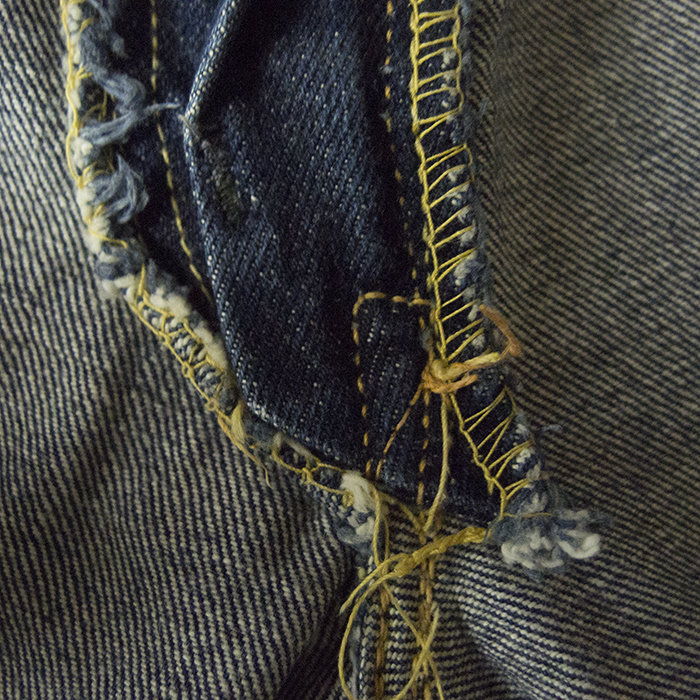 It is carefully folded and stitched on, rather than the cutouts of the pre-WWII model. 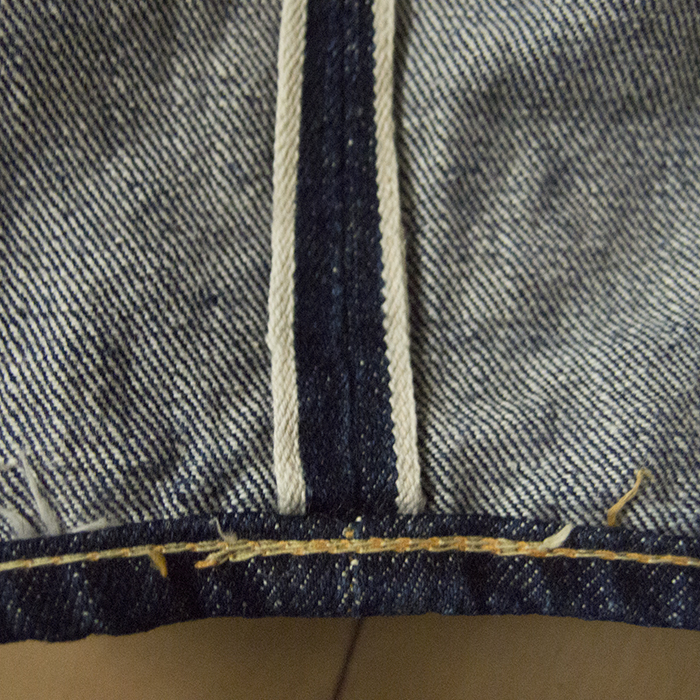 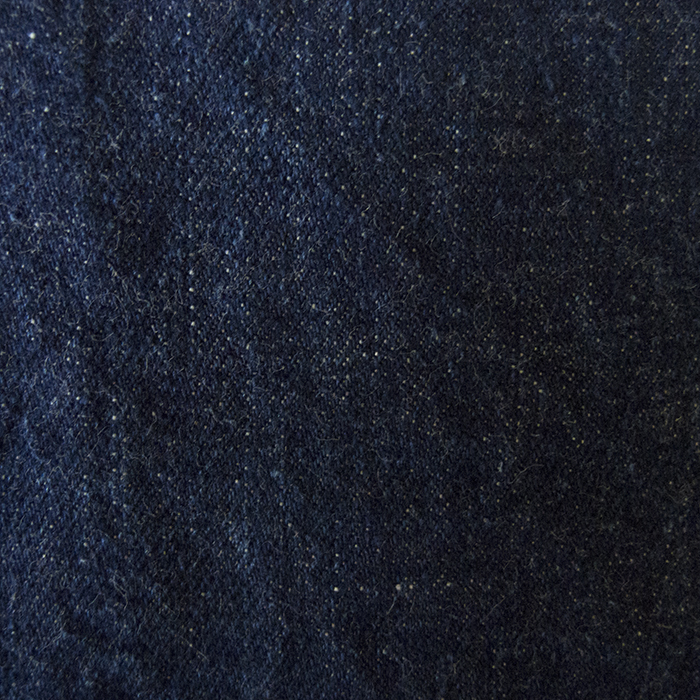 The fabric seems to have a slightly stronger reddish tint compared to those of the WWII model. A lot of naps are still seen, and the weave scars are also scattered.
HOME | Denim Archieves (in English) | Vintage & Old Denim Bottoms | LEVI'S 503BXX (leather patch, 1 side red tab) No.2