This is a single-sided tab model of the 501xx boys' and youth model 503BXX. The lower part of the button fly wing is cut off, so it is assumed that this model was made between 1946 and 1947, right after WWII. Even Levi's was forced to hire inexperienced seamstresses under the shortage of human resources during the WWII, and it is said that the sewing of WWII models is said to be rough and coarse, however, some of the models introduced here are said to have had a rough quality of architeit stitching, and it is said that low rebel seamstresses were engaged in sewing soon after the war. You can see the difference. The stitching is all yellow stitching, and the long side stitching is one of the early features of the early single-sided tabs that are firmly in place. 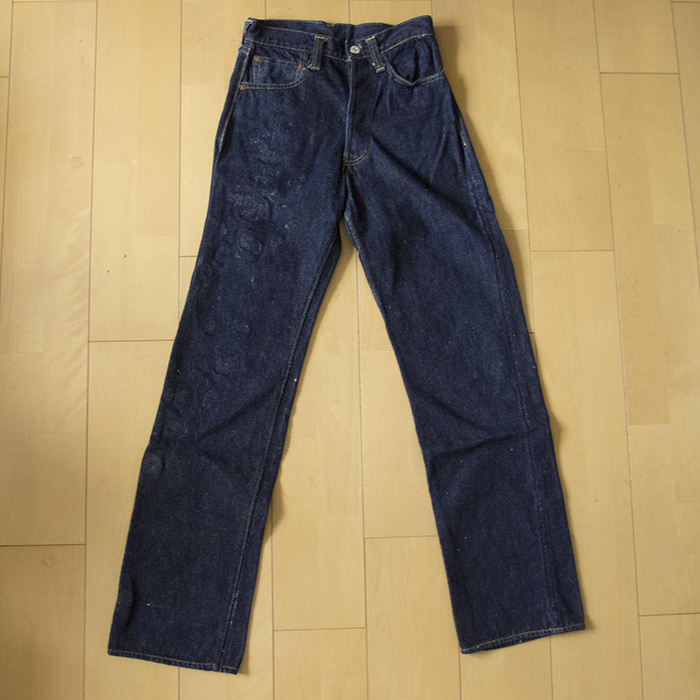 It's a thicker, straight silhouette that falls straight down to the hem, although the slightly longer length may make it appear thinner. While the color is dark, it has been repaired due to numerous holes around the thighs. 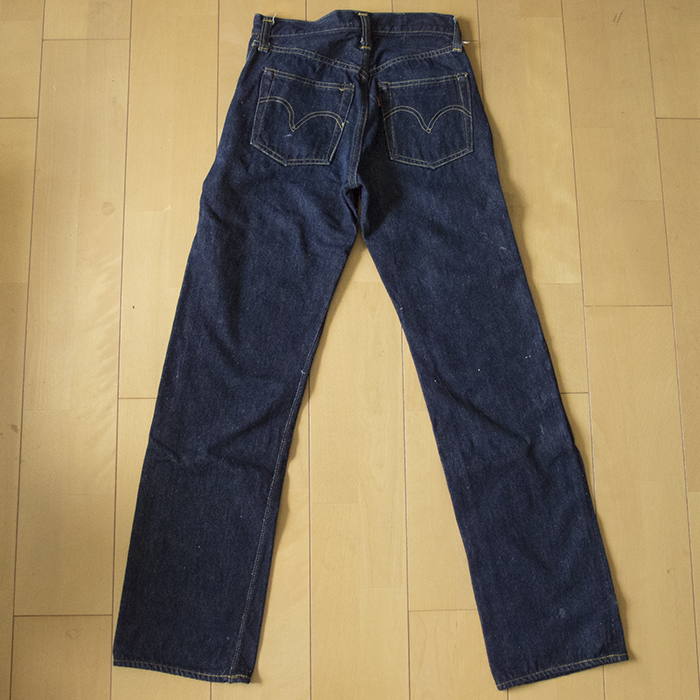 Unfortunately, the leather patch has been removed, leaving only a mark. The thread has also been removed. 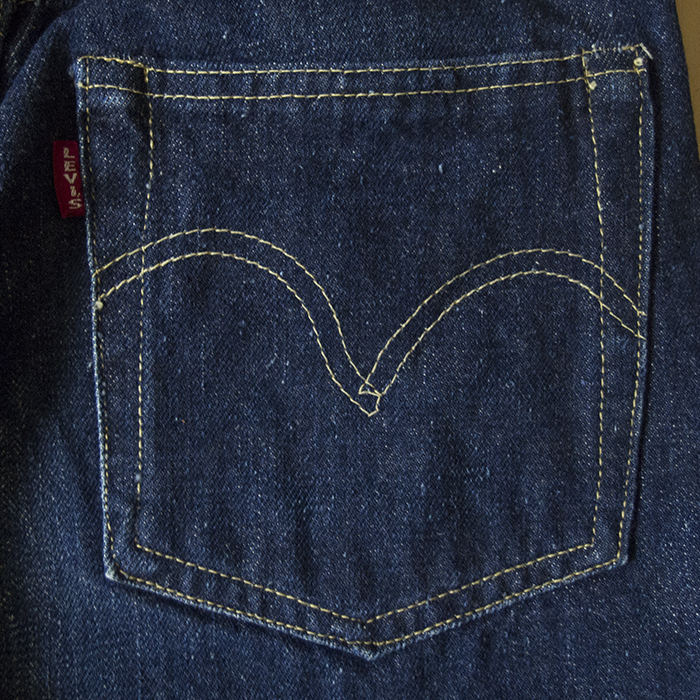 The shape is almost square; the sewing of the architeit stitching on a two-needle sewing machine was started after the war, but it was quite unaccustomed in the beginning, and as you can see, the shape is quite uneven. The stitching is all yellow stitching. 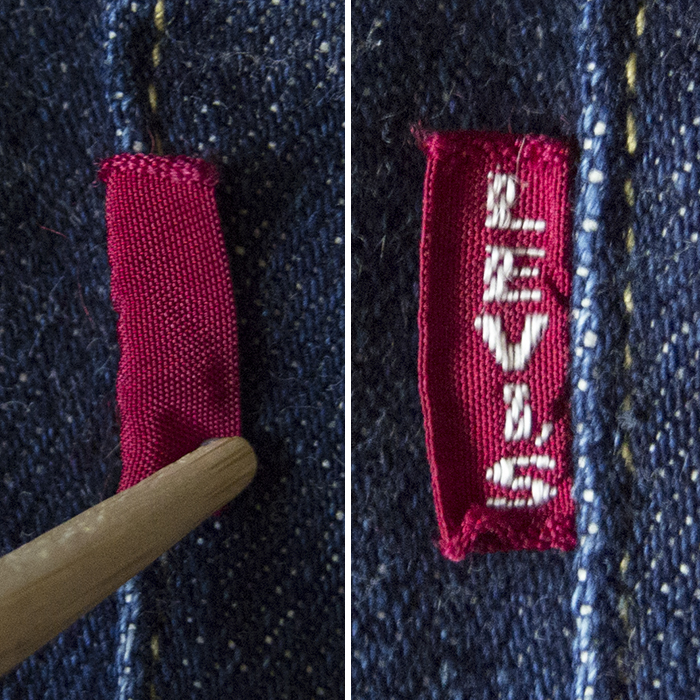 "LEVI'S" embroidered on one side of the tab on the surface only. 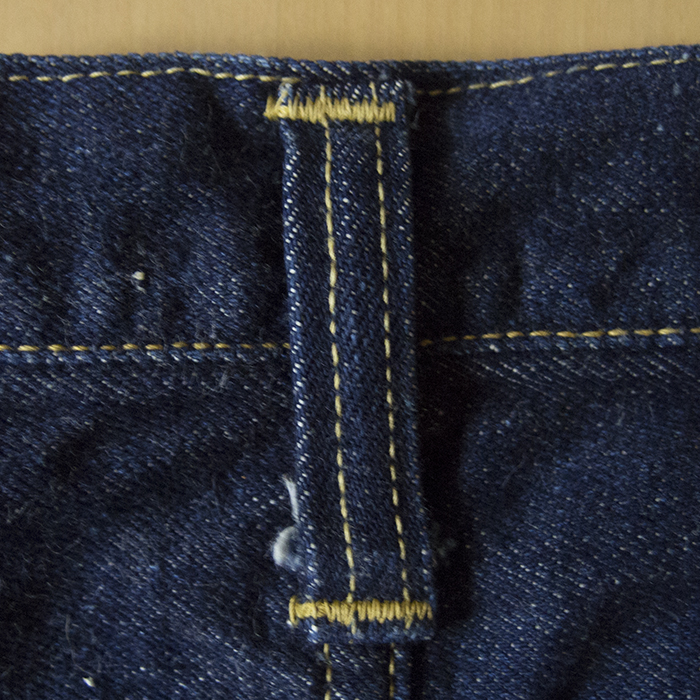 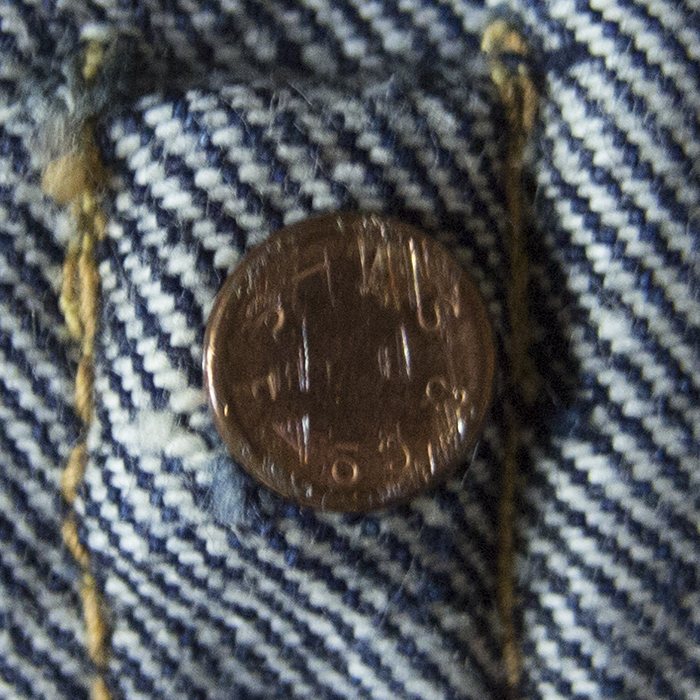 Plated iron buttons. Flat all over, only slightly bulging in the center.

I know it's a 503BXX because there are only two fly buttons.

Domed top button back. No engraving. 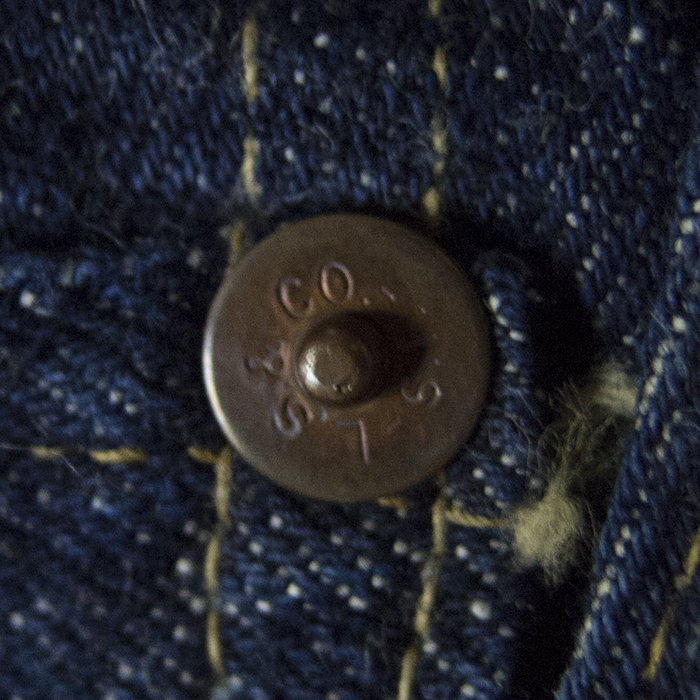 Copper rivets with no magnetic response. All rivets have a capital "O" and letters near the center. 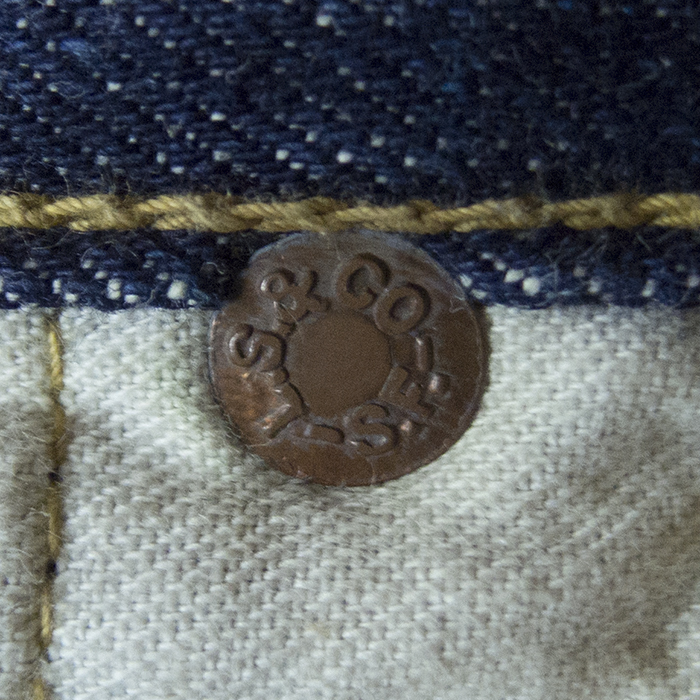 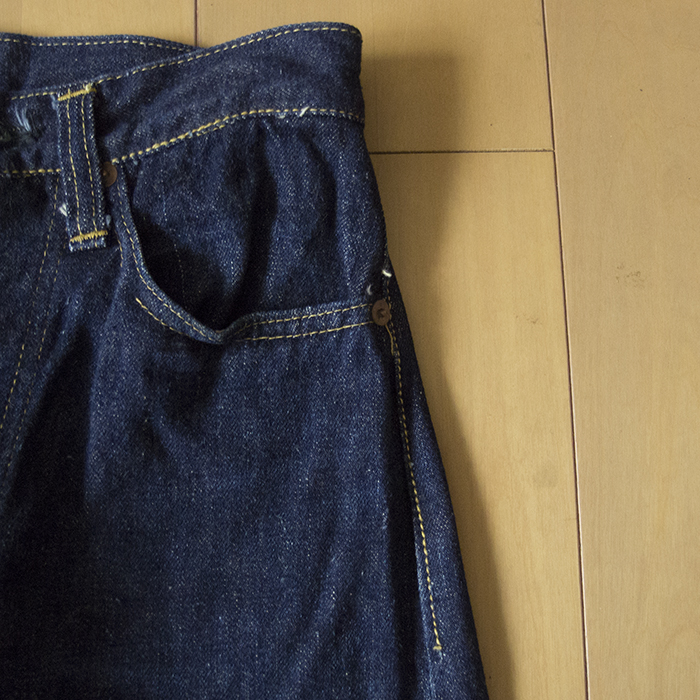 The side stitching is very long, about 20 cm. 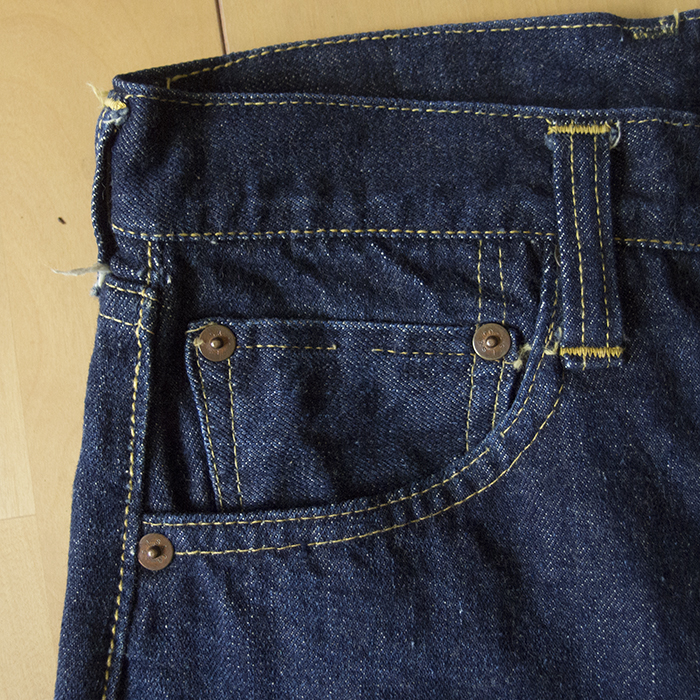 The ears are used. The coin pocket is vertical and the other side is horizontal. 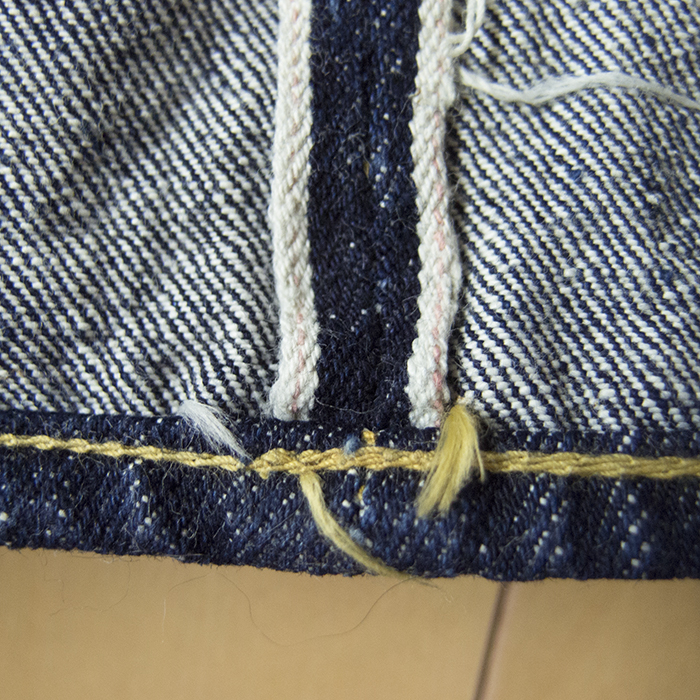 The outseam is handled normally, not the messy stuff you often see on the Great War models. 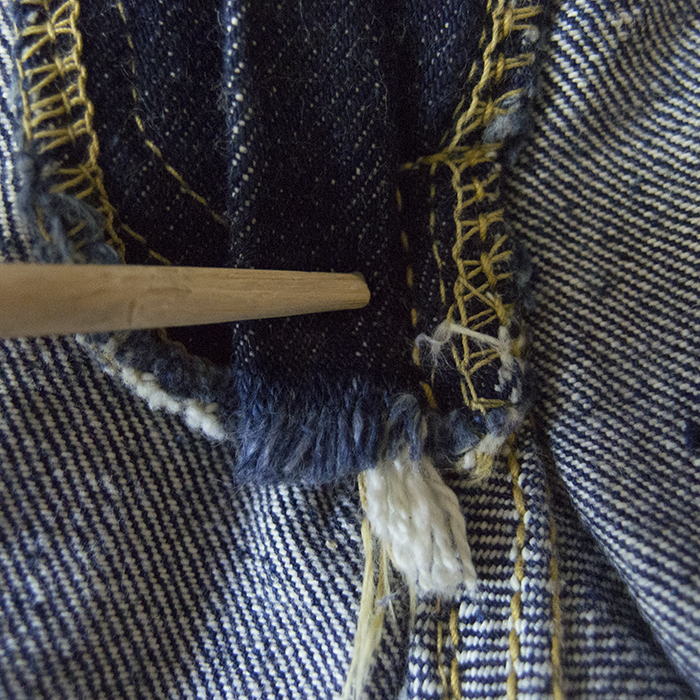 The back of the flap is treated in the same way as the Great War models with the cut-offs. 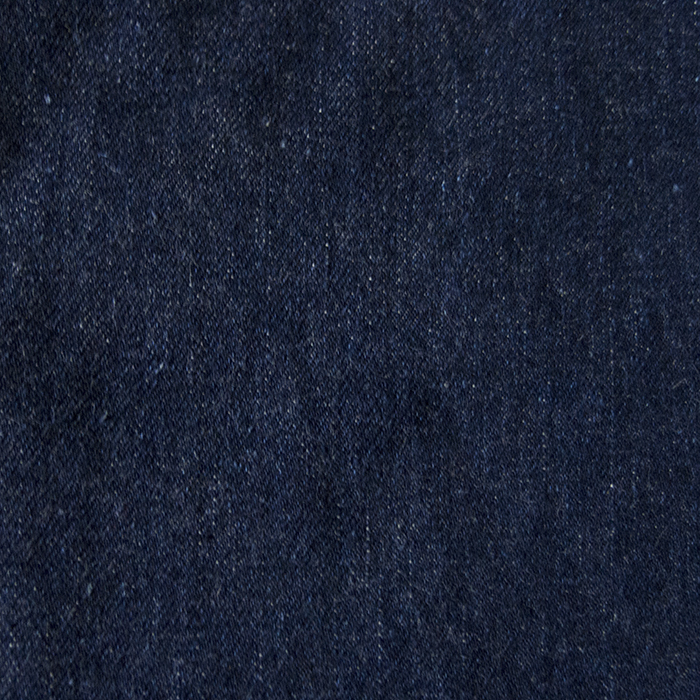 A certain amount of slubbyness can be felt as if the fabric were from the 1940s. Some nepps are not surprisingly noticeable, but there are some large nepps in places. Some flaws in the weave. It is a very deep indigo color, but it is not black or grayish. The color is still dark, but it is sufficiently soft.