In 1971, when Levi's went public, the notation of the red tab was changed from "Levi's" (Big E) to "Levi's" (small e)(In fact, there is a transition period of several years and the red tab is a mix of big E and small E.).Presented here is a dead stock 1976 66single model with small e red tabs, it is said to be characterized by a clear vertical drop and a bright blue hue. "66 single" because it is distinguished by whether or not the back pocket is sewn with a single stitch. The latter half of the 1970s was a time when denim production changed drastically in stages due to the explosive increase in demand for jeans, the difficulty of securing synthetic indigo due to the oil shock at that time, and the intensification of price competition due to the increase in imports of foreign-made fabrics from Asia and other countries. The introduction of sulphur dyeing, open-ended spinning, and innovative looms to reduce the use of synthetic indigo is interesting in that it can be seen these changes in stages in the 66single, 66chain and redline models.Moreover, it is often said that the fuzziness of the 66 model is intense, but it seems to be influenced by the fact that the source of the supply of cotton shifted from Mississippi Delta to Texas due to the increase of the demand of the above-mentioned jeans and the progress of the means of transportation. 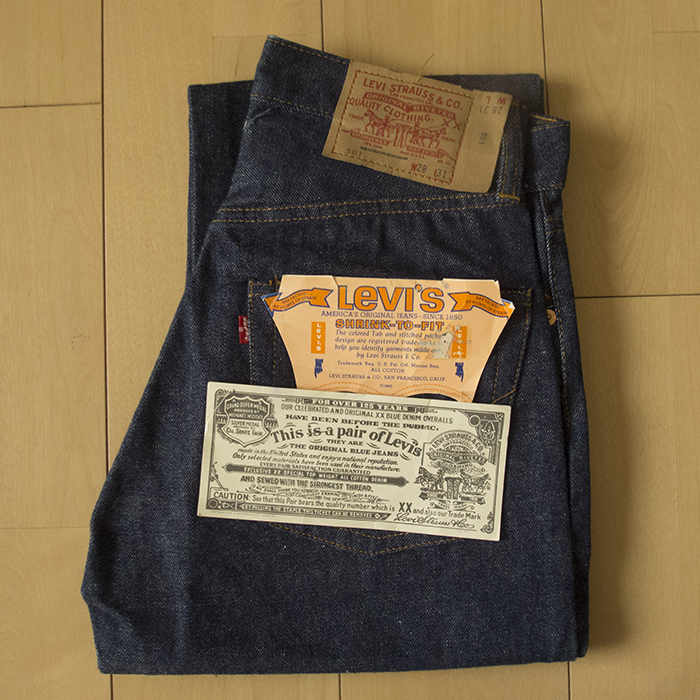 Up until the Big E, it was darker in its rigid state, but this 66 model has a stronger impression of lushness. 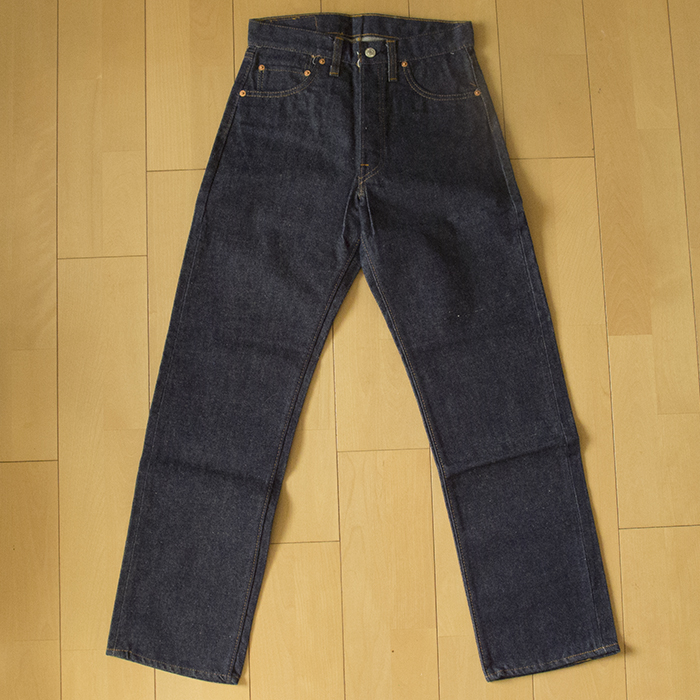 It is tapered as a whole and appears to be more tapered from the thigh than the BIG E. 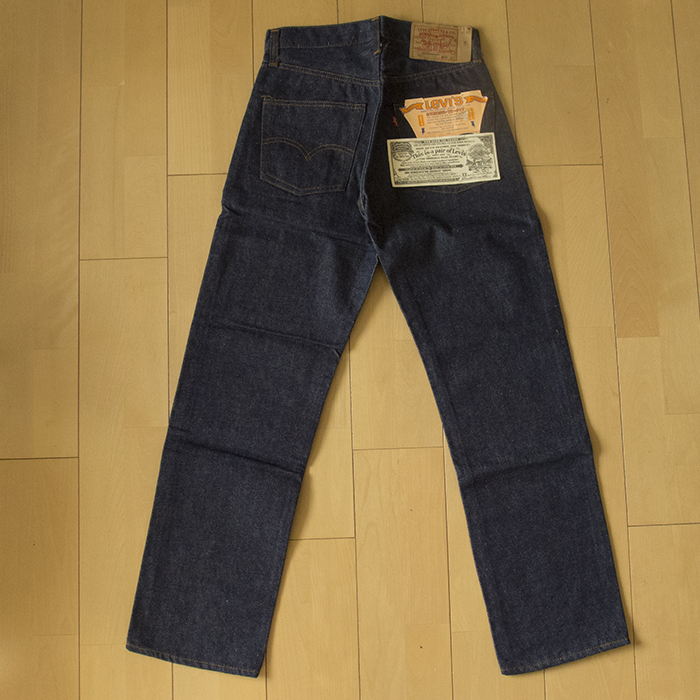 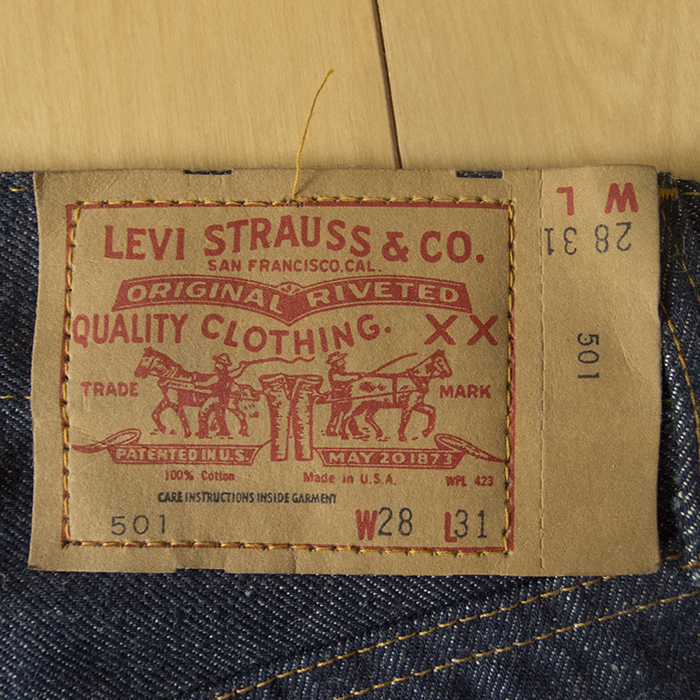 It is now stamped with the CARE stamp and the product handling instructions are written on the inside tag. Also, it now has a tear-off tag with a cut-out line to the right. 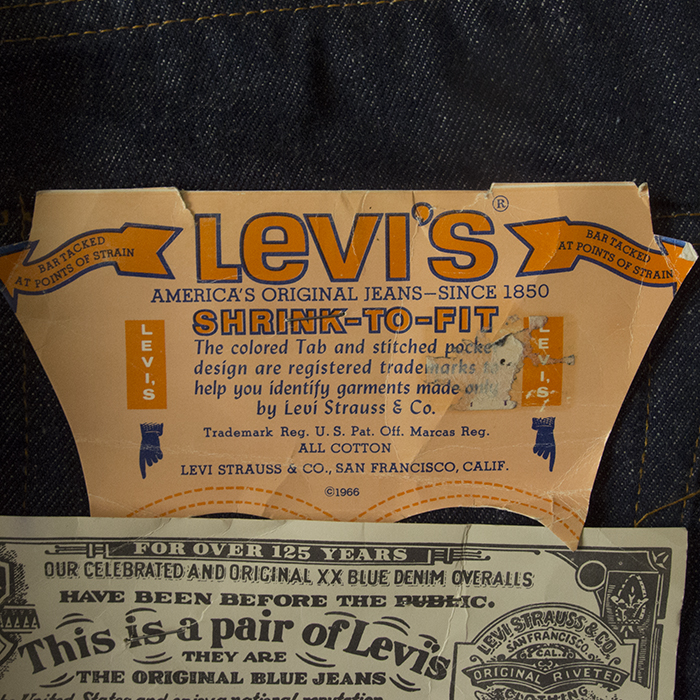 The C1966 copyright notice is below. Naturally, the design is the same as the BIG E flasher, copyrighted in 1966, with the "e" in the "Levi's" logo in lower case, but the "E" in the illustration mimicking the red tab in upper case." Although "C1966" is the origin of the naming of the 66 model, this flasher was used for a long time from the BIG E to the early lines era, so it is difficult to understand for those who have no prior knowledge. 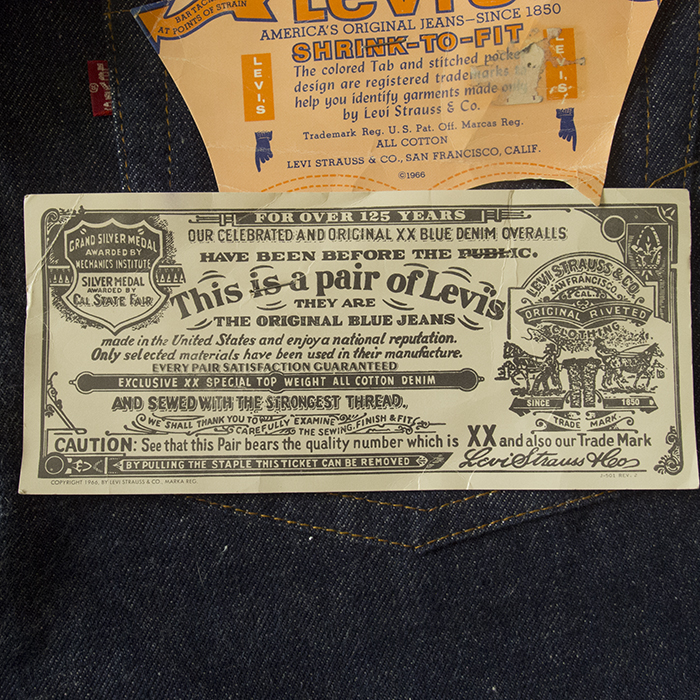 The number of "FOR OVER ○○ YEARS" has been changed to 125 compared to Big E's, but the copyright year in the lower left-hand corner is still 1966. 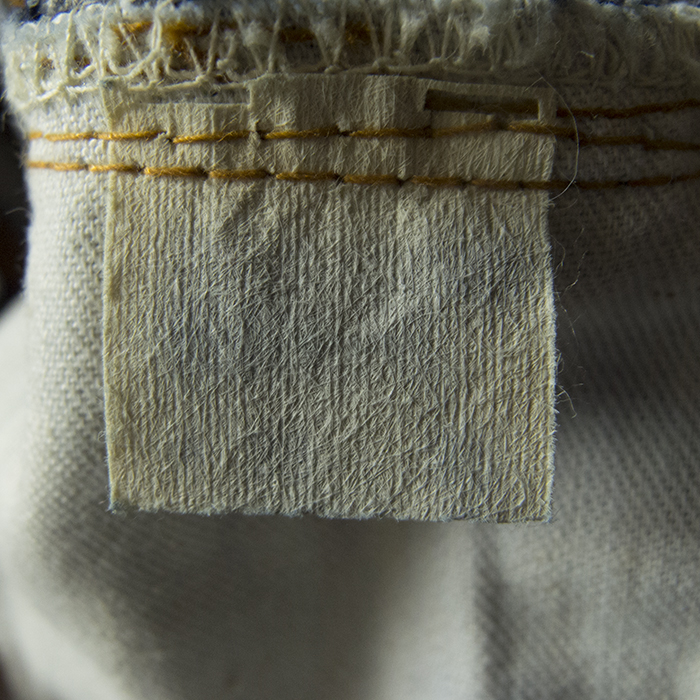 There is an inner tag on the left hip that is supposed to be a paper patch with handling instructions. However, even though it is dead stock, the writing has disappeared. 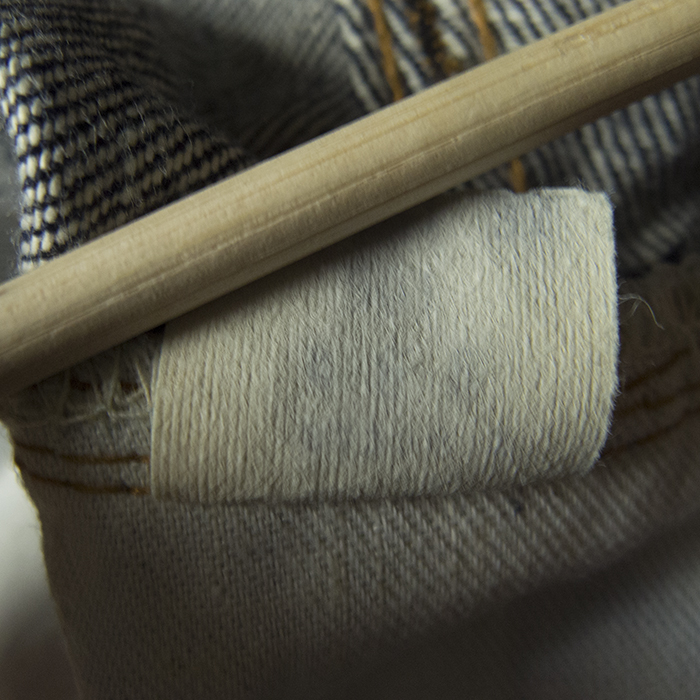 Most of the writing is gone on the back as well. However, it is hard to see in the photo, but the number "4 6 6 6" is faintly visible in the lower center of the photo, so we can know that it was produced at the factory No. 6 in April 1976. 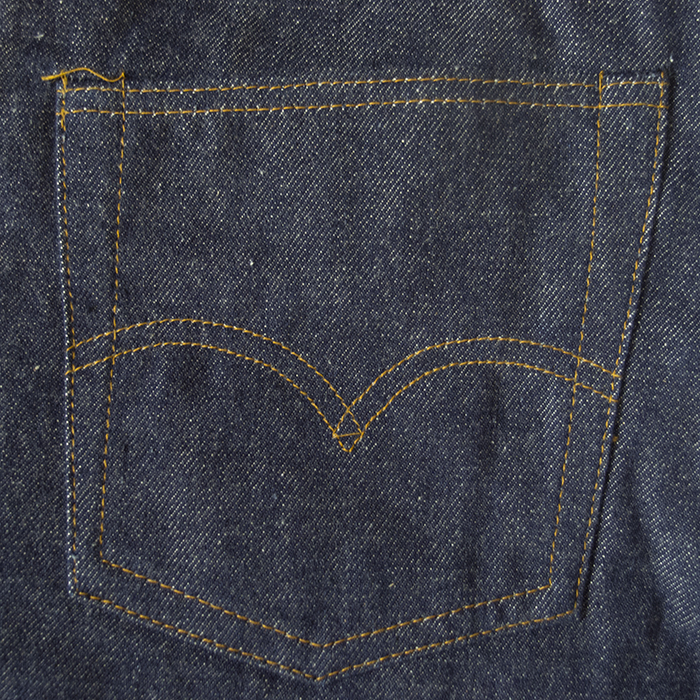 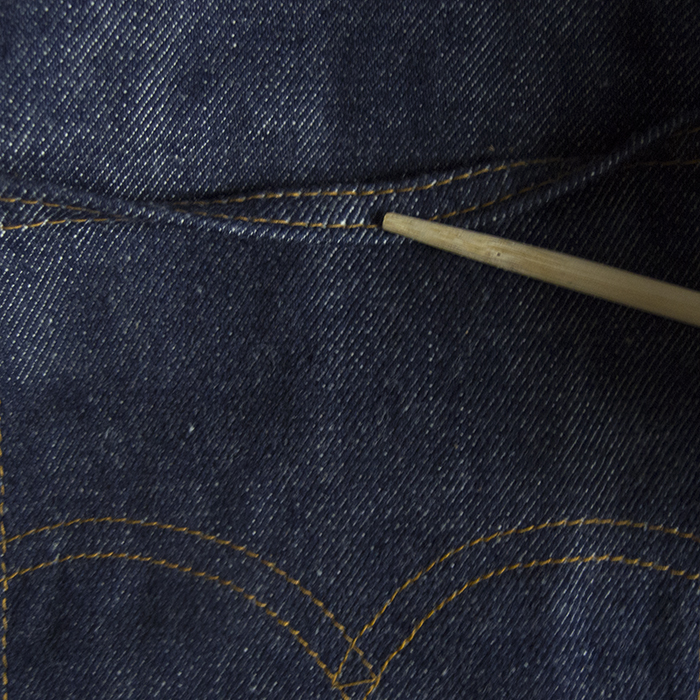 The stitching behind the back pocket is the decisive factor in distinguishing the 66single and 66chain. If it's a single stitch, it's 66single, and if it's a chain stitch, it's 66chain. A distinction has been made between the first and second halves because of the different tendencies of color fading. 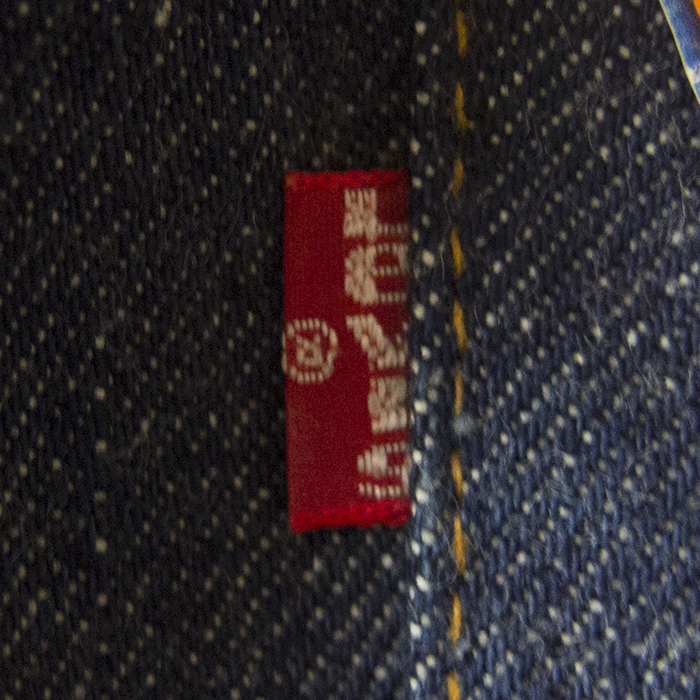 Small E double-sided embroidery tabs. It's hard to tell from the photo, but the letter "V" is back evenly on the left and right. 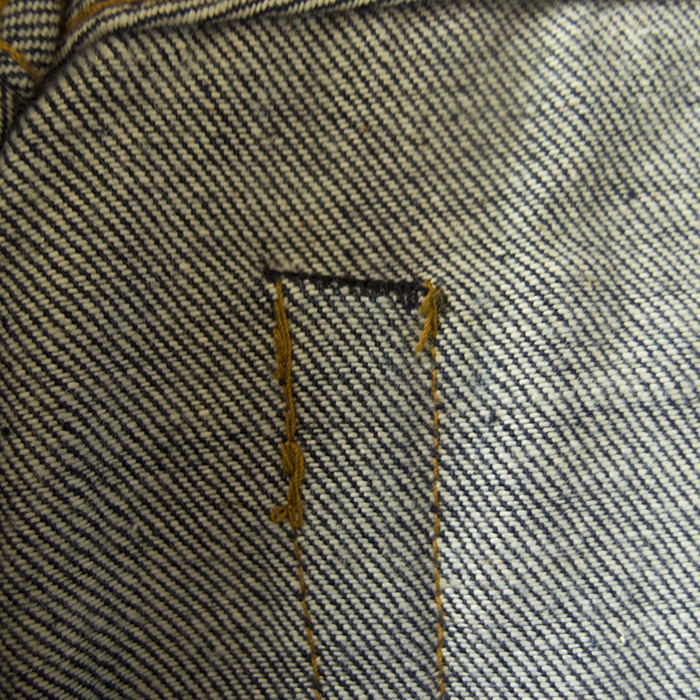 The bar tacks is black.

There are pots and patches, and the center is raised. The material must be plated iron.

The number of buttons remains the same as in BIg E, with four, including the top button.

Unlike the Big E, the foot length R is not used. Also, like the top button, the pots and pans have been changed to prominent buttons.

The engraving is "6". The stitching around it is orange, although it is hard to tell due to the color of the photo. The top of the waist belt is chain stitched. 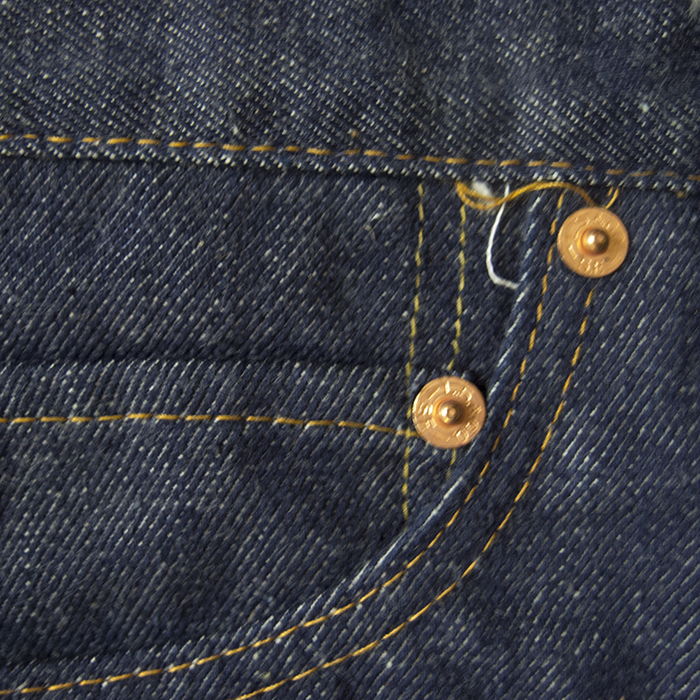 It is a copper-plated iron rivet. 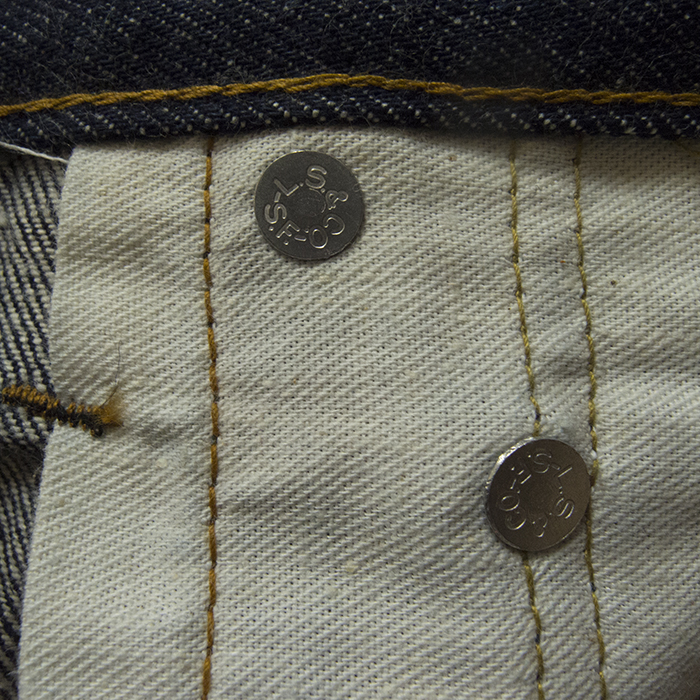 It is made of aluminum. 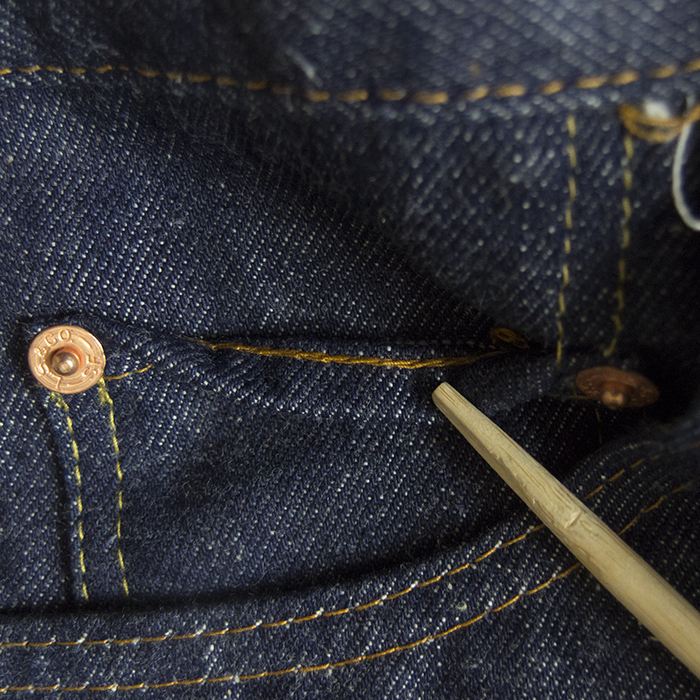 The fabric of both the coin pocket and the other cloth is used vertically. The stitching on the back is a chain. 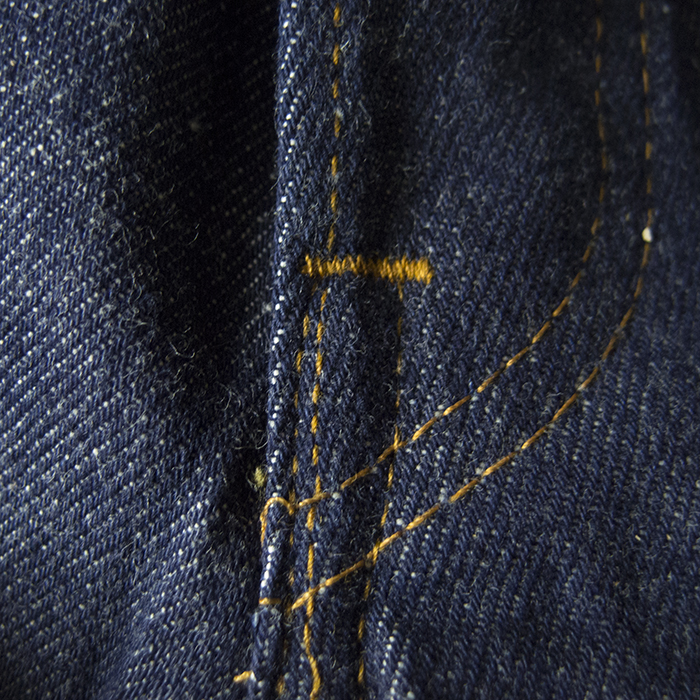 The stitching is cannulated to match the seams. 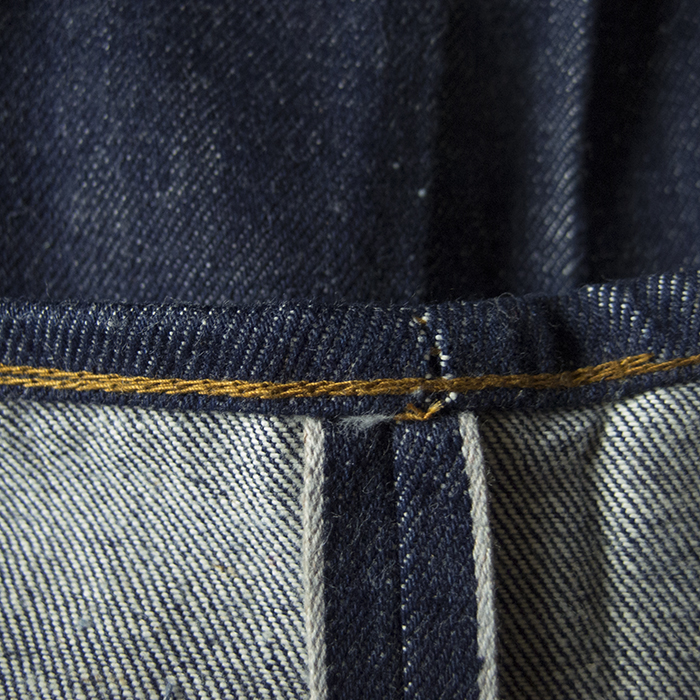 Even though it is dead, the red color has been lost, but there is a hint of it. The hem is sewn quite a bit out of place. 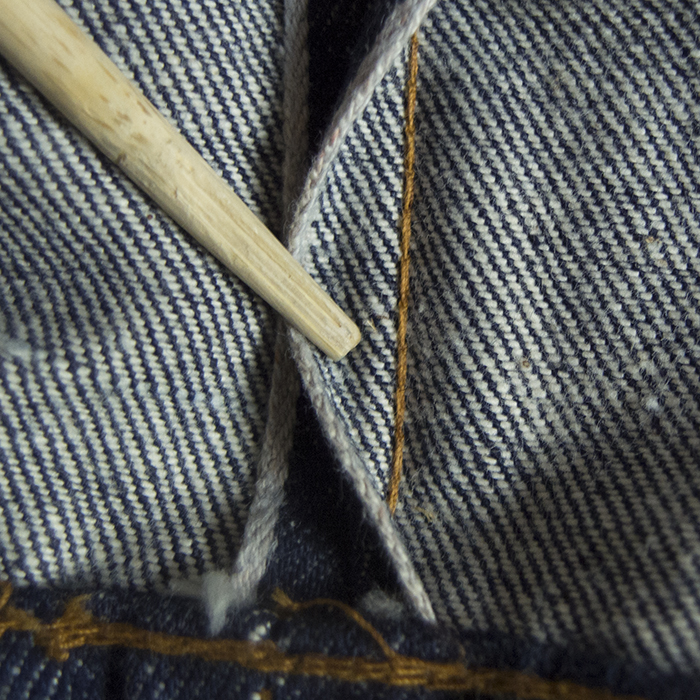 On the Big E, this is the single stitch here, but from 66 it's a chain stitch. It is useful to distinguish a Big E with missing paper patch and red tabs (66 Big E) or even missing red tabs from a Big E or 66 model. 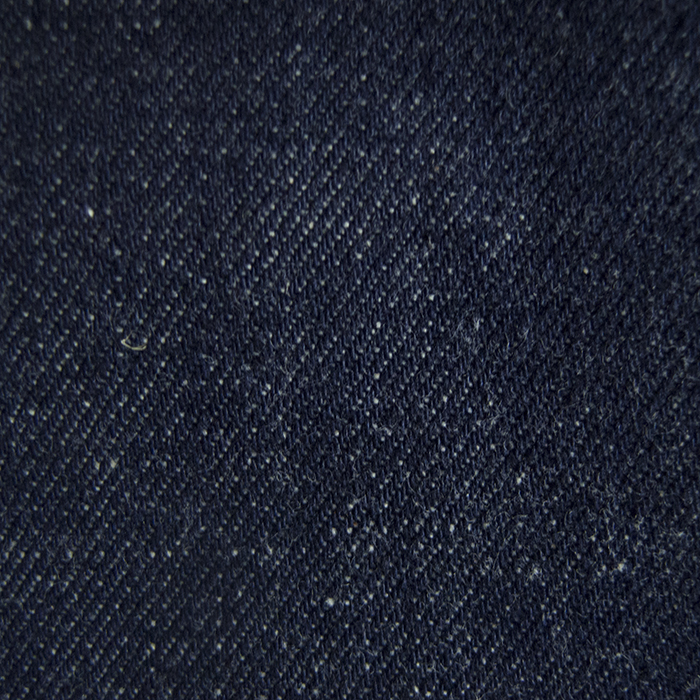 It has a strong blue tint, no slab or nep, but it is said that it has a different appeal in terms of color fading than XX and Big E.