It is also called "66 chain" because the back pocket is stitched with a chain stitch, while the back pocket of the earlier model is stitched with a single stitch. It is often said that the color fade of the late 66 and red-eared models is the same as that of the late 66 and red-eared models, but this one up to 1978 has a slight vertical fade and is different from the red-eared models.
Here is one that has already been washed once, although it comes with a flasher and a guaranty ticket. From the sticker marks on the guaranty ticket, it seems that it may have been washed and sold for Japan. 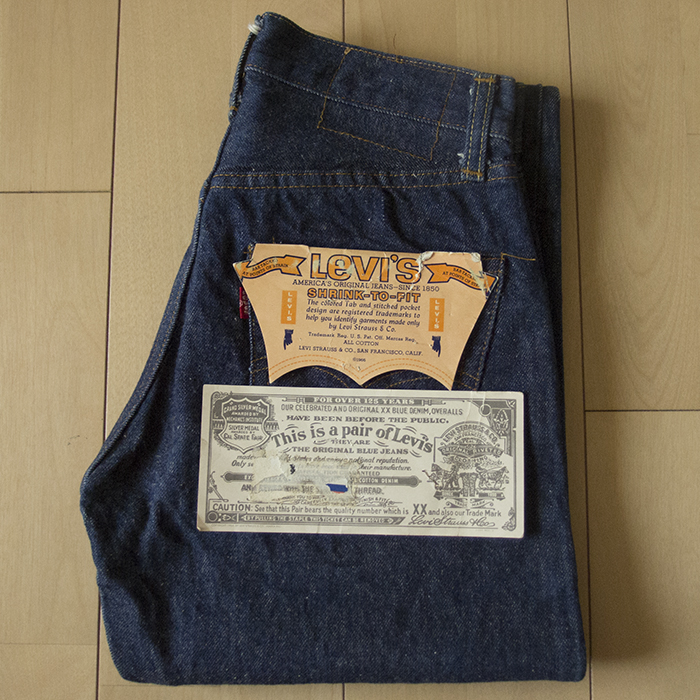 Although the flasher and guaranty ticket were included, the paper patch has been removed. 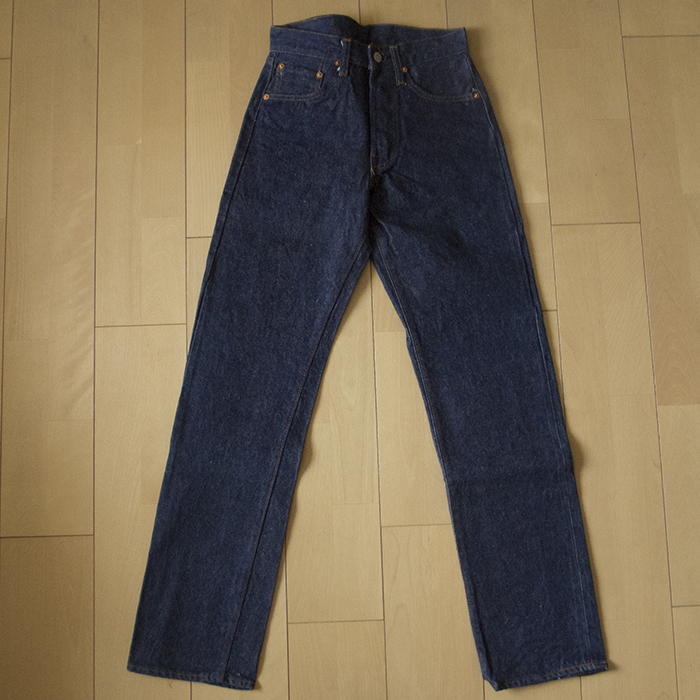 The silhouette appears to be the same as in the early 66single. 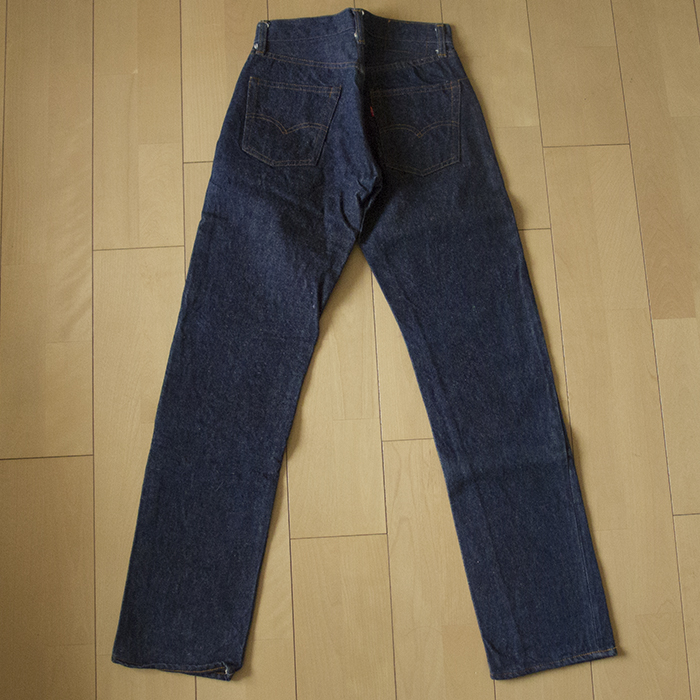 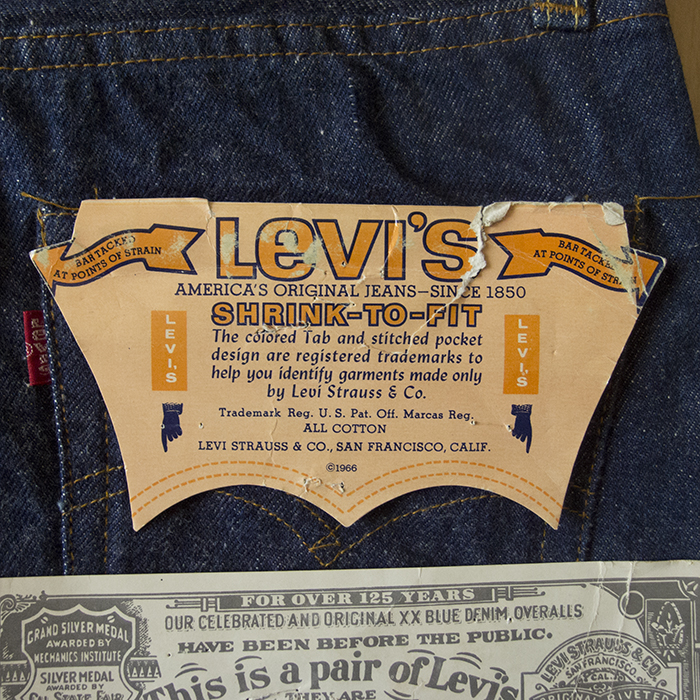 In fact, it has been removed from the body of the jeans. The copyright notation of C1966 is included, so it is the same as BIG E, 66single, redline. 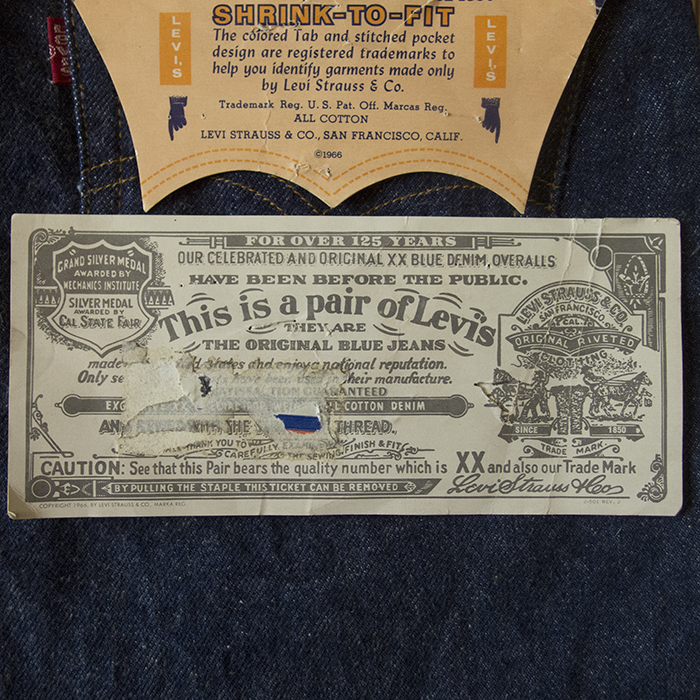 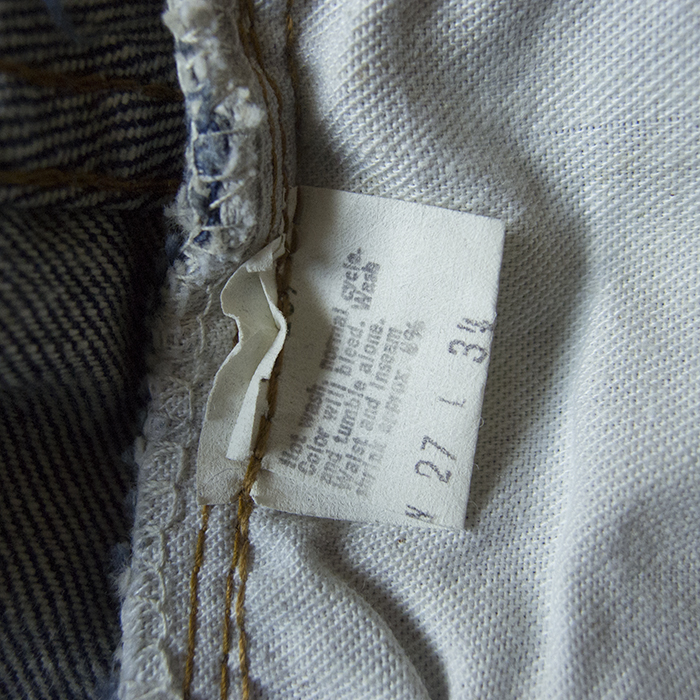 The late 66 has chain stitching behind the back pocket, which overlaps its use with the red-eared model, but if the shrinkage rate written on the inner tag is 8%, it is judged to be a late 66 model (10% for the red-eared model). It is not clear whether the actual shrinkage is different, and since this figure only describes the maximum shrinkage, it may be that the figures were just rounded off in the transition to the red-ear model. 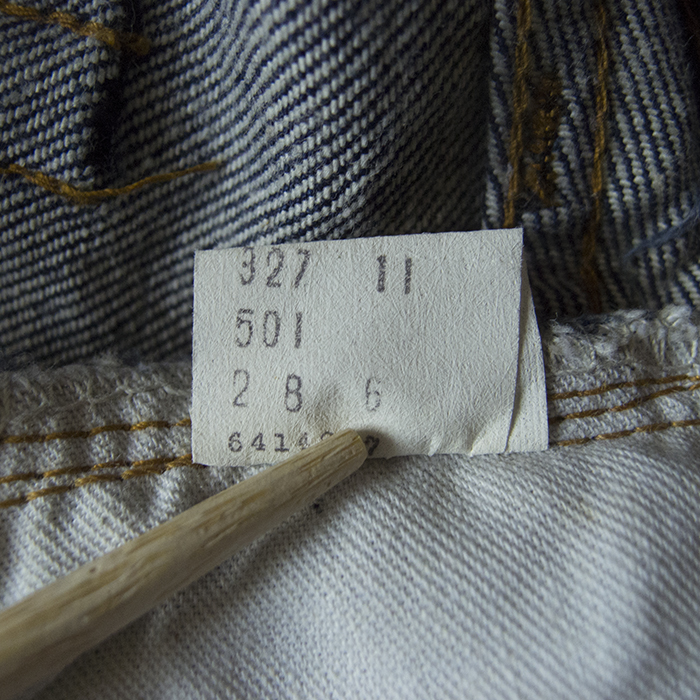 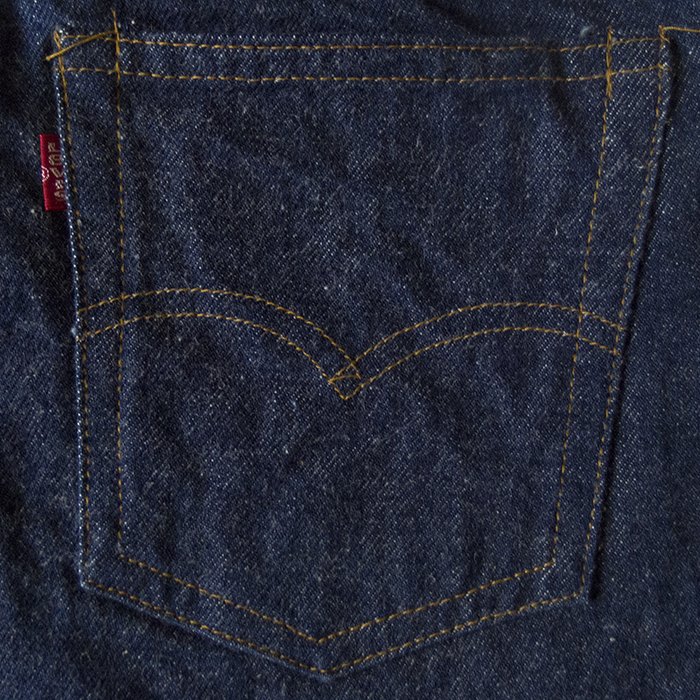 A slightly longer back pocket as in the early '66. The angle of the arcuate stitch is quite shallow. 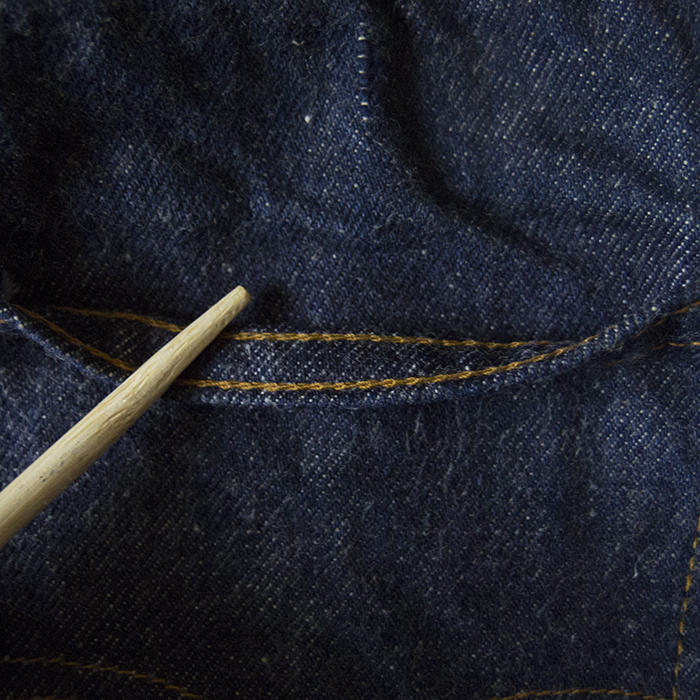 A feature of the 66chain model is the chain stitching on the back pocket back, which distinguishes it from the 66single model. 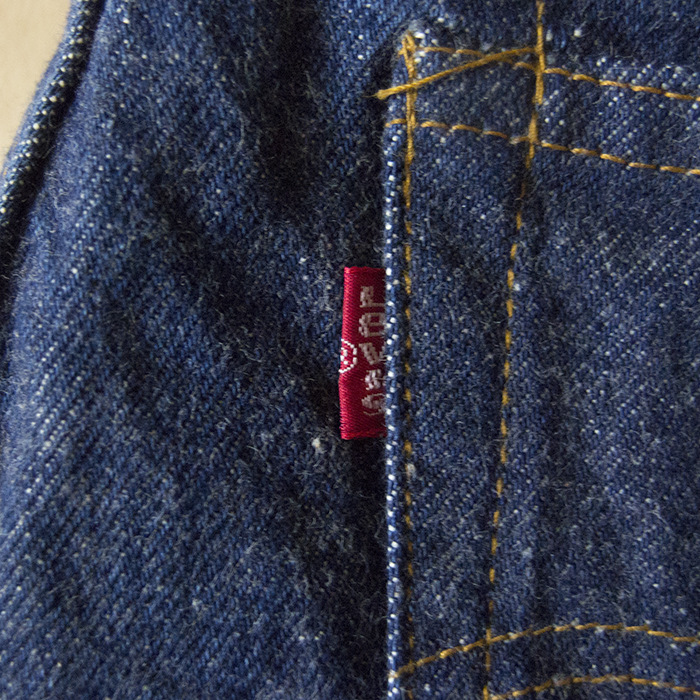 In the small e double-sided embroidery tab, the "V" is an uneven "V". 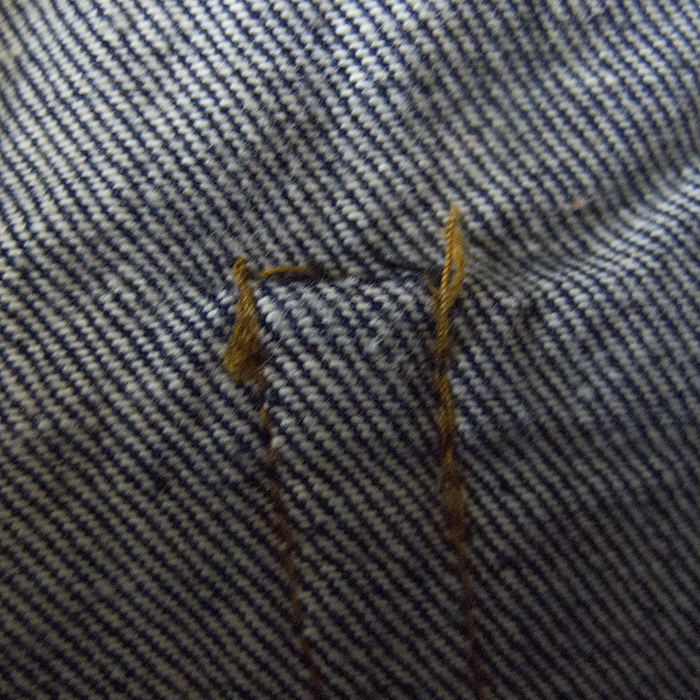 It is made of plated iron and is slightly inflated throughout. There are potholes between the characters. Next to the top button, parallel stitching.

There are three buttons, excluding the top button.

A button with a pitter-patter between the letters. It is not a foot long R. 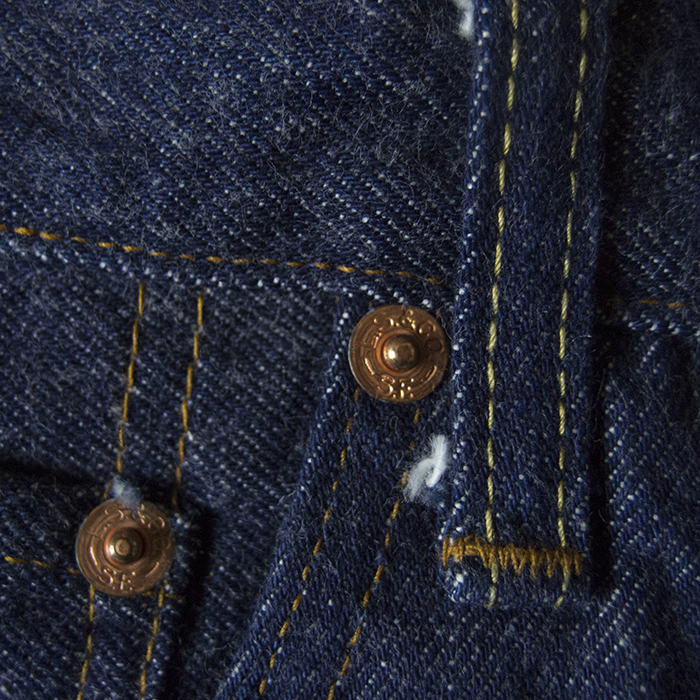 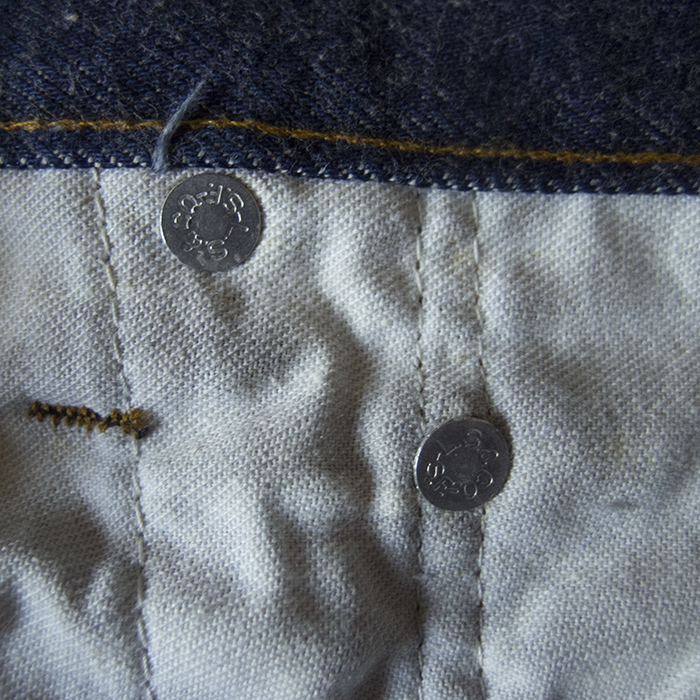 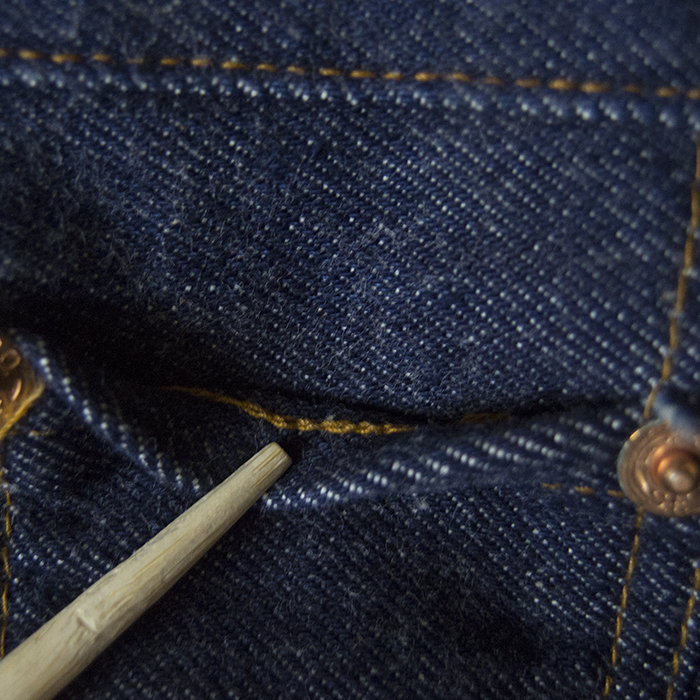 The fabric of both the coin pocket and the other cloth is used horizontally. The back is chain stitched. 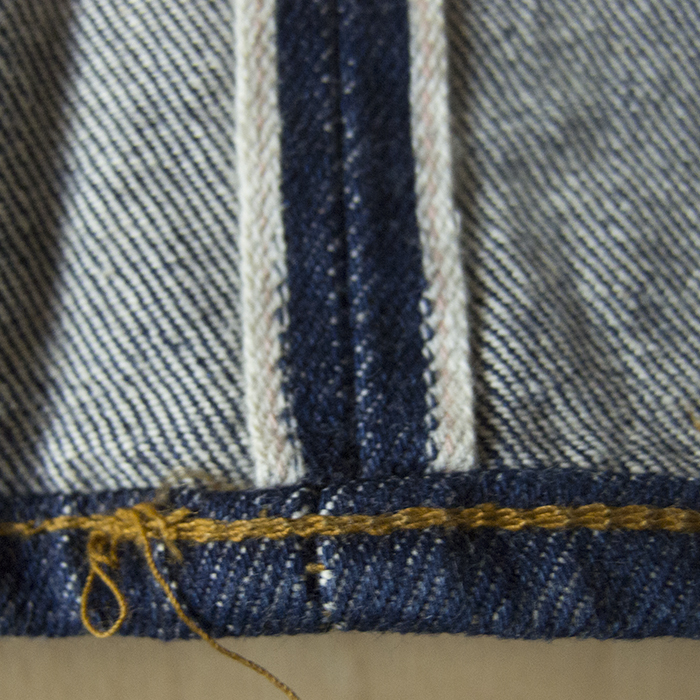 It's a redline, but the red has already faded. The hem is an orange chain stitch on both the top and bottom thread. 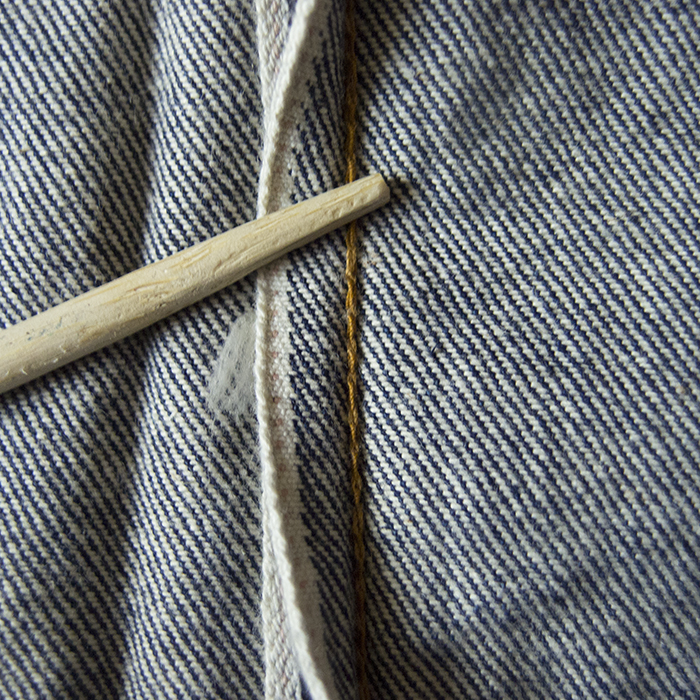 It is sewn with chain stitch. 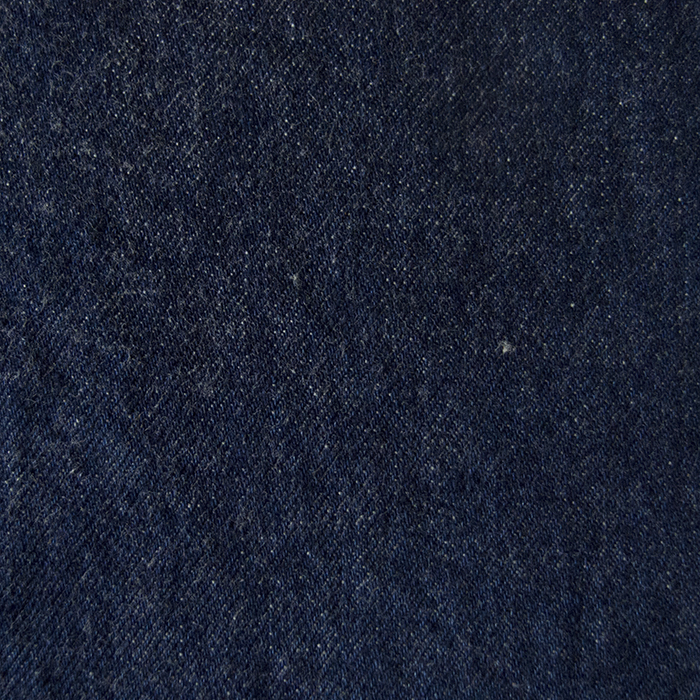 It is a little fluffy because of one wash. The color is also indigo with a slight grayish tinge, and you can see the influence of the sulfide underdyeing. You can't feel much of a slab feeling when you touch it.