Around the time Cone Mills stopped making denim with selvedge in 1983, 501 also changed to one without selvedge. This one is one of the relatively early non-selvedged 501s of the 1982 and 1980s, and is called "a black bar tack" because of the black thread used to the bar tacks. From the late 1970s onwards, the quality of the yarn and weave was improved by the introduction of open-ended spinning and innovative looms, and the production efficiency and product stability were improved, but people at that time probably didn't expect the vintage denim boom. 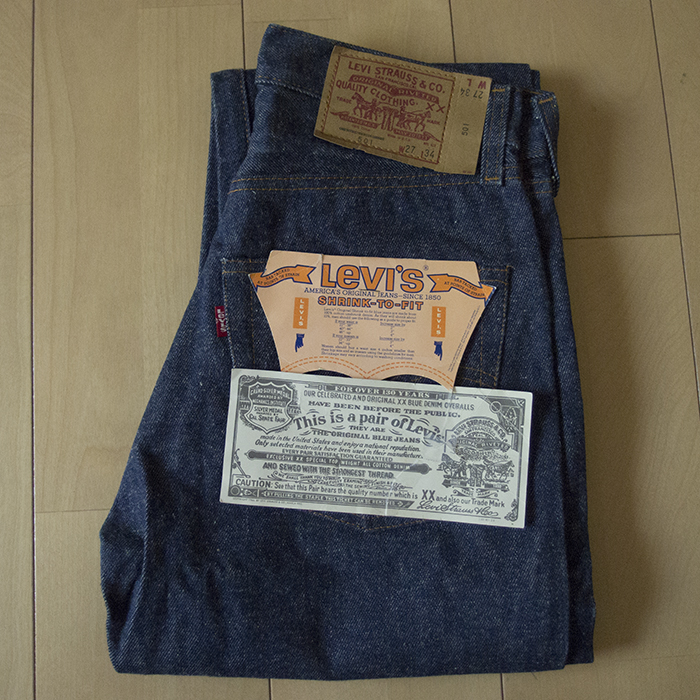 The paper patches with tear-off tags and the flasher design are no different from the 66 model or the red ears. 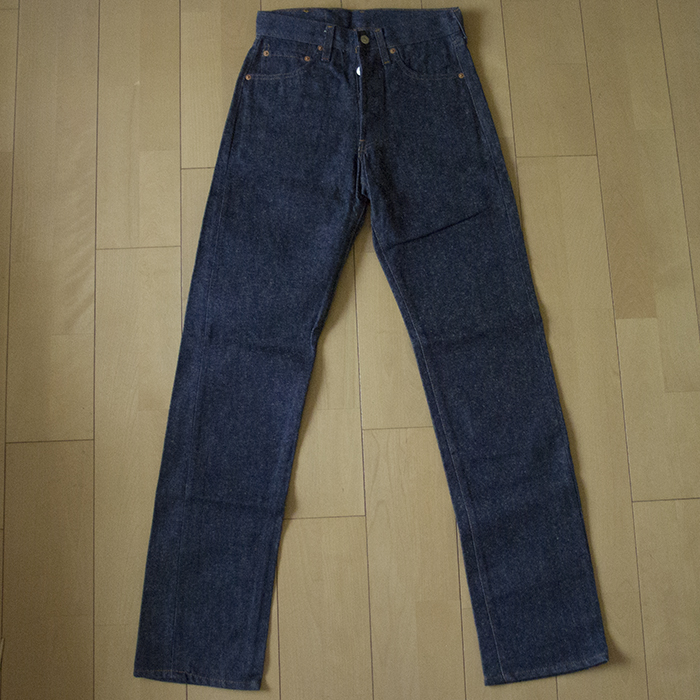 The silhouette is slightly slender and gently tapered. 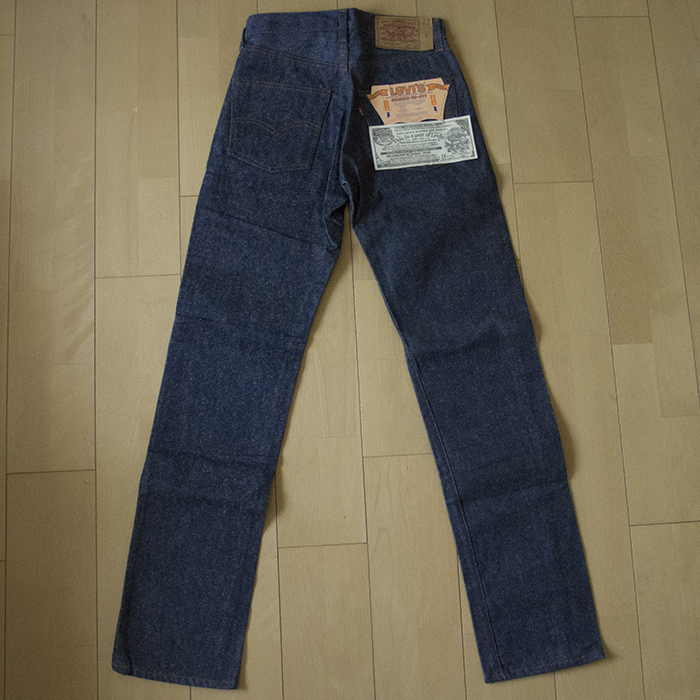 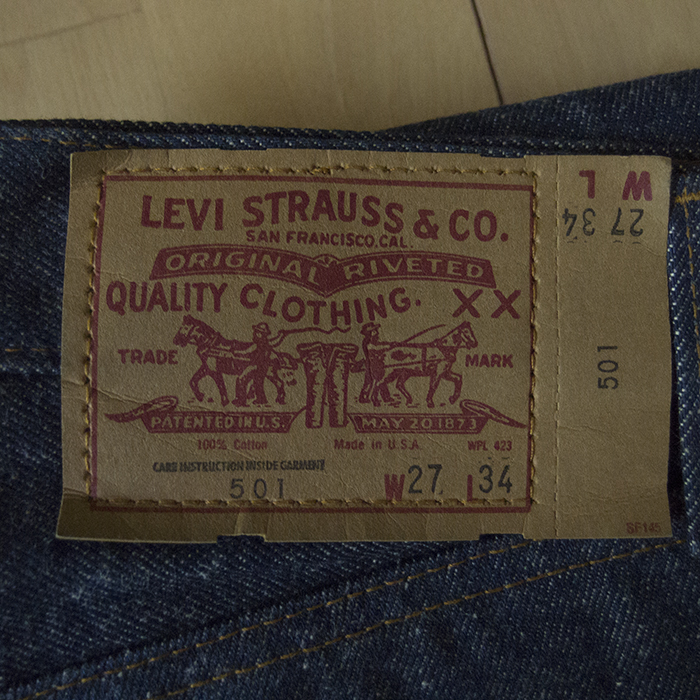 It's a paper patch with Care stamped tear-off tabs, no different than the 66 model or red ears. 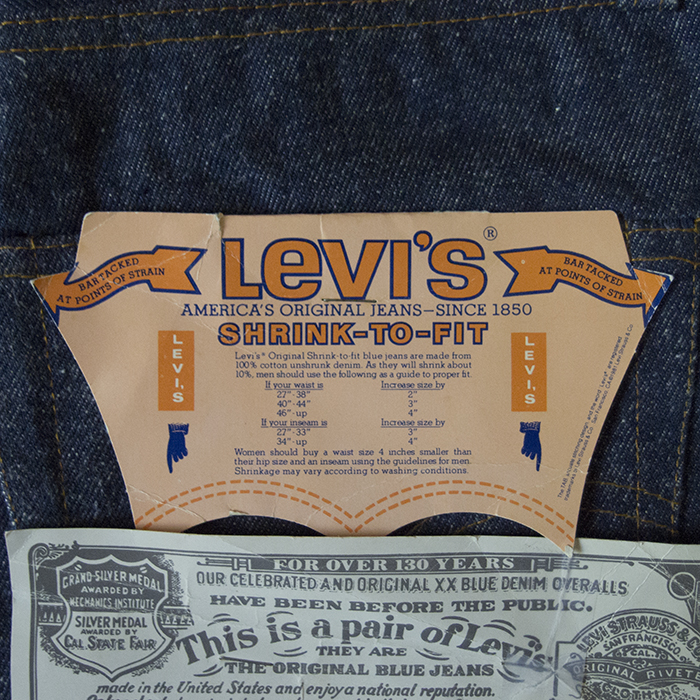 The center section has been changed from the red-ear era to describe how to choose a waist and length size. The year of copyright acquisition is not listed, but those made in November 1982 will be listed as 1982. 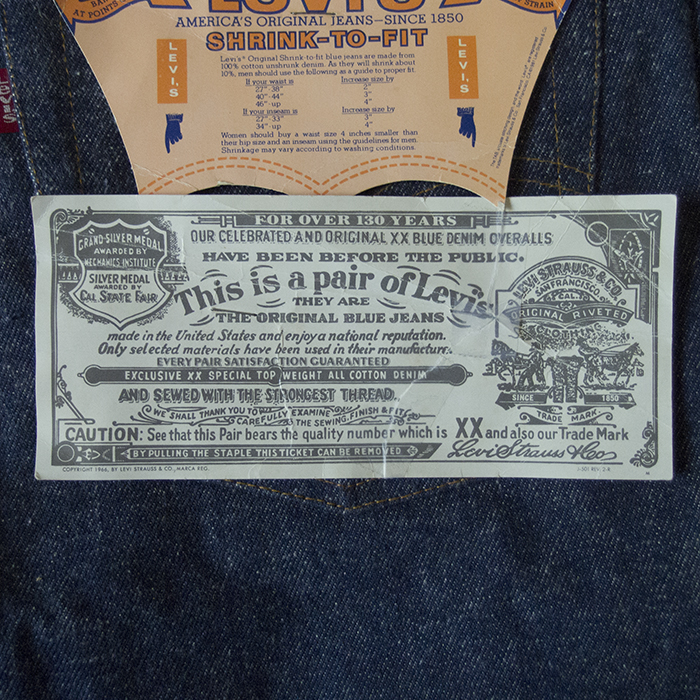 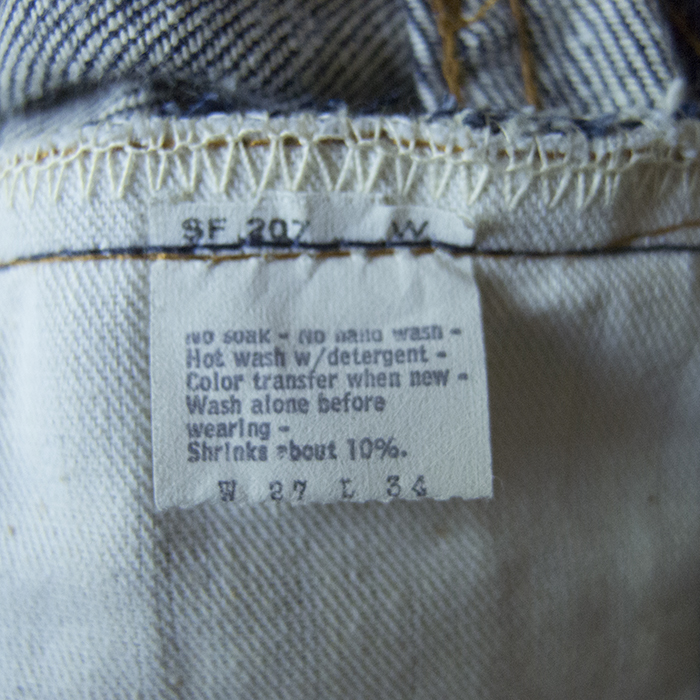 Although it is after the abolition of the selvedge, the shrinkage rate is still 10%. 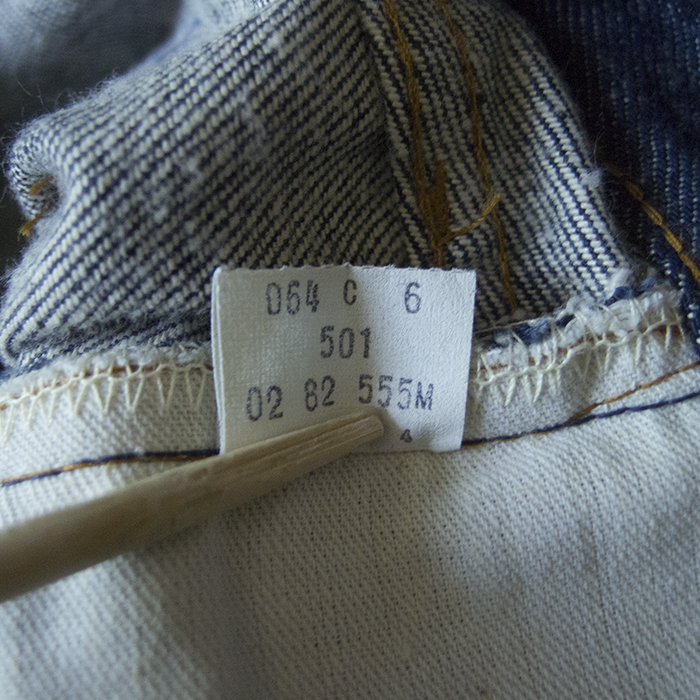 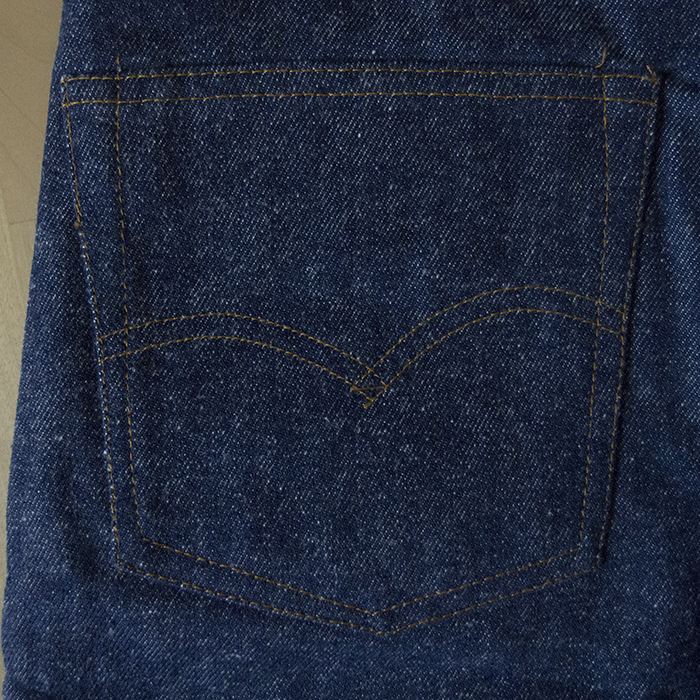 Nearly square-shaped back pocket with a shallow arcuate stitching angle. 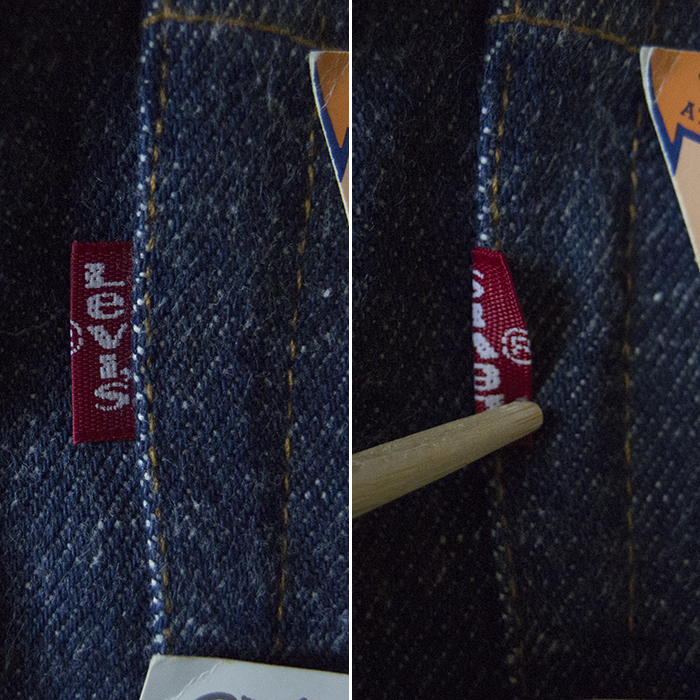 Uneven "V" with double-sided tabs in Small E. It's not embroidery, it's print tabs. 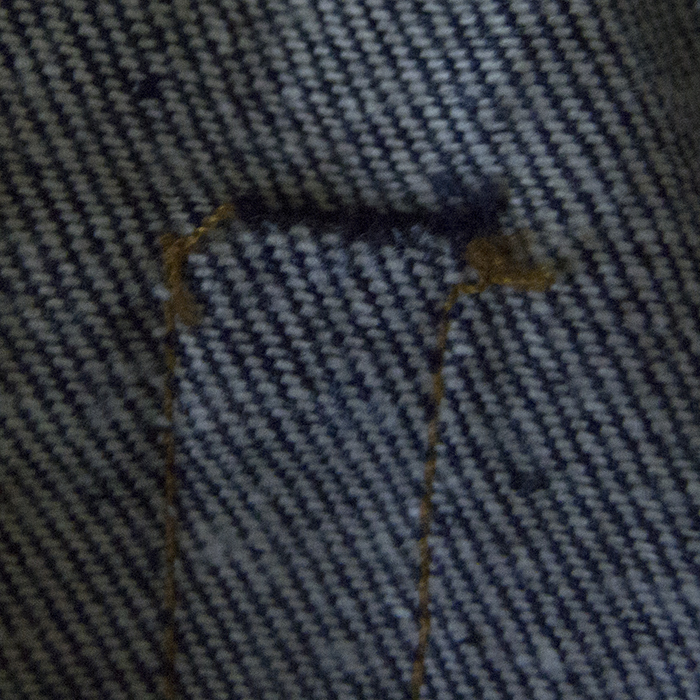 The earliest of the non-selvedge have black bar tack and are known as "kuro-kan". After a while longer than this, the color of the bar tack stitches changed.

Galvanized iron buttons with parallel stitching across the top button.

Buttons that are not foot-long R with a pitter-patter between letters. There is no change from the preceding and following.

"555" engraved and chain stitched above the waist belt. 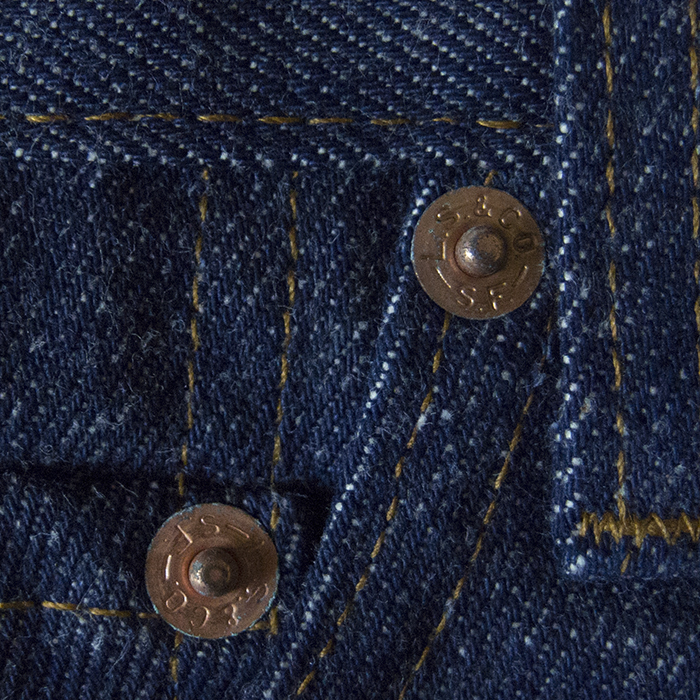 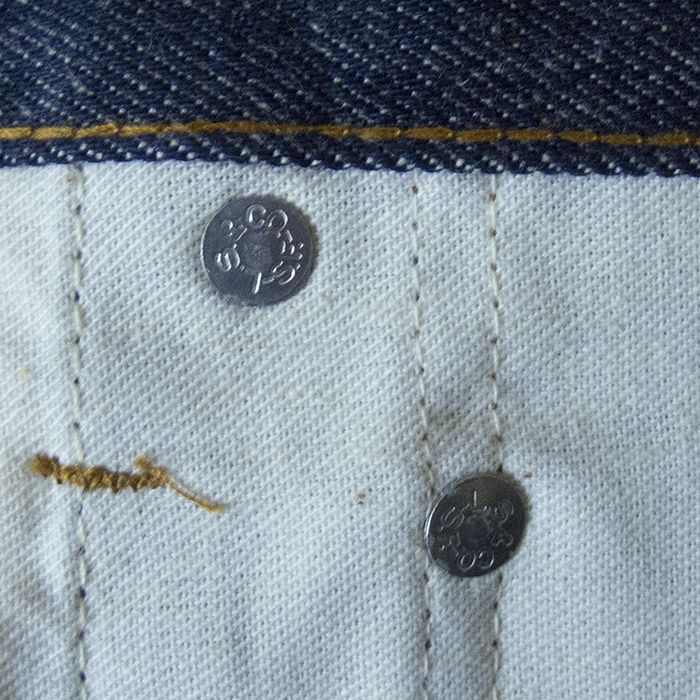 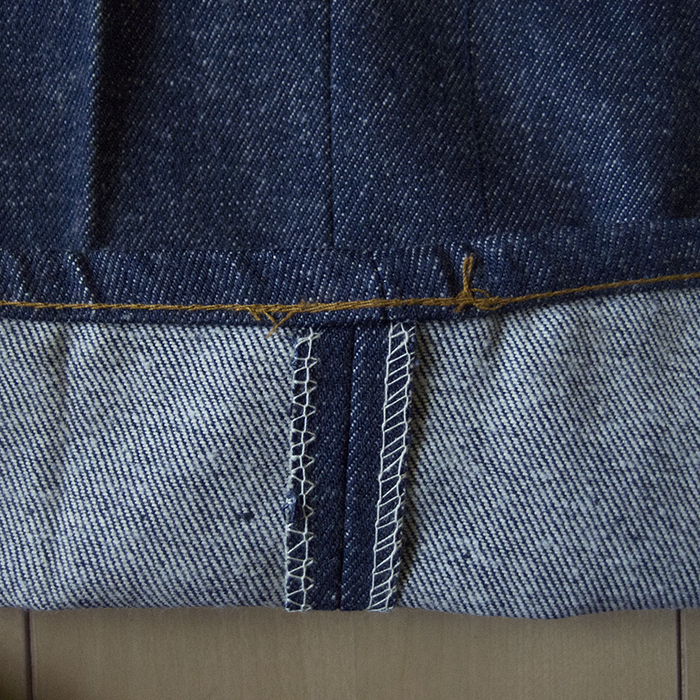 It is sewn with a rock sewing machine with white thread. Chain stitching at the hem. The seams are quite misaligned and will likely twist considerably if washed. 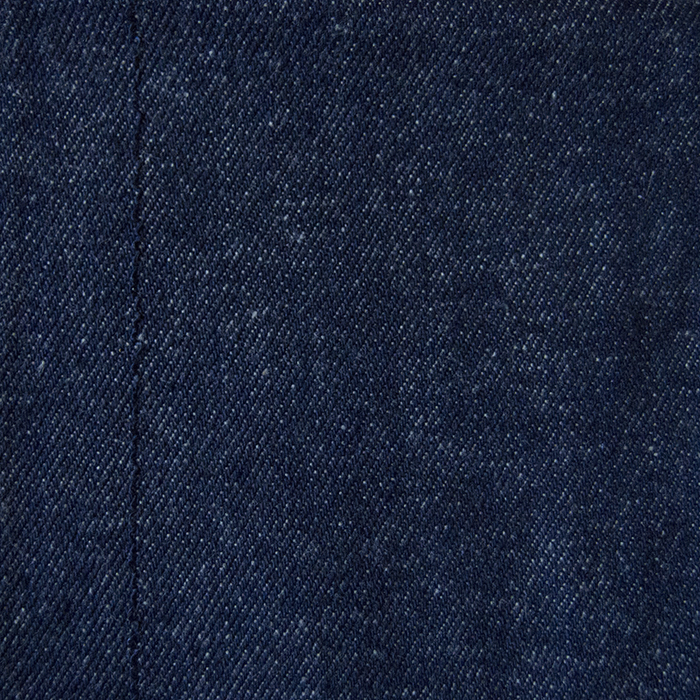 The fabric was woven on an innovative loom, but you can see a fairly long weave flaw on the left of this photo. The coarseness of the fabric is poor. Even in a rigid condition, there is a lot of fluff and some nipping in places.