This is a low-cost version of Levi's 501, which has a riveted back pocket, a cinch back, suspender buttons, and belt loops, so it is thought to have been manufactured in the 1920s and 30s, corresponding to the 1922 model in 501. There are a lot of repairs and the condition is not good, but the linen patch that is prone to loss is fortunately still there. 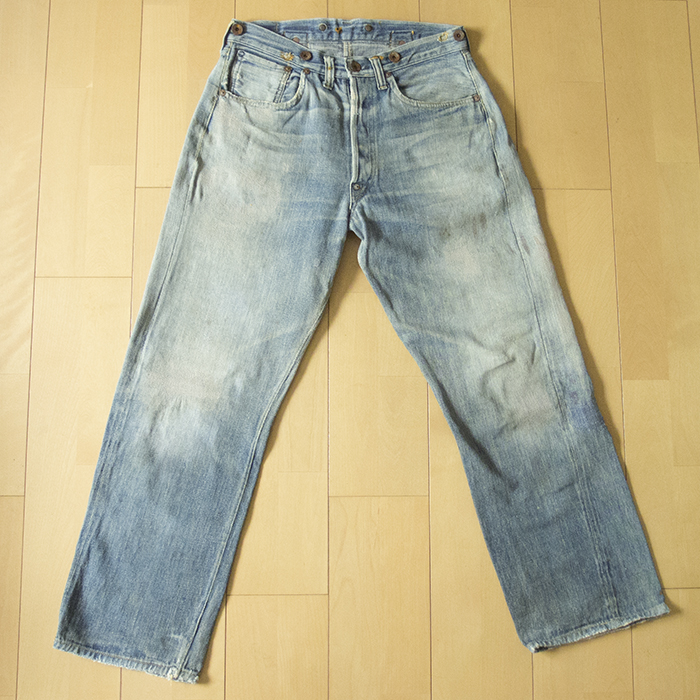 It's quite bold and straight. It falls straight down towards the hem. 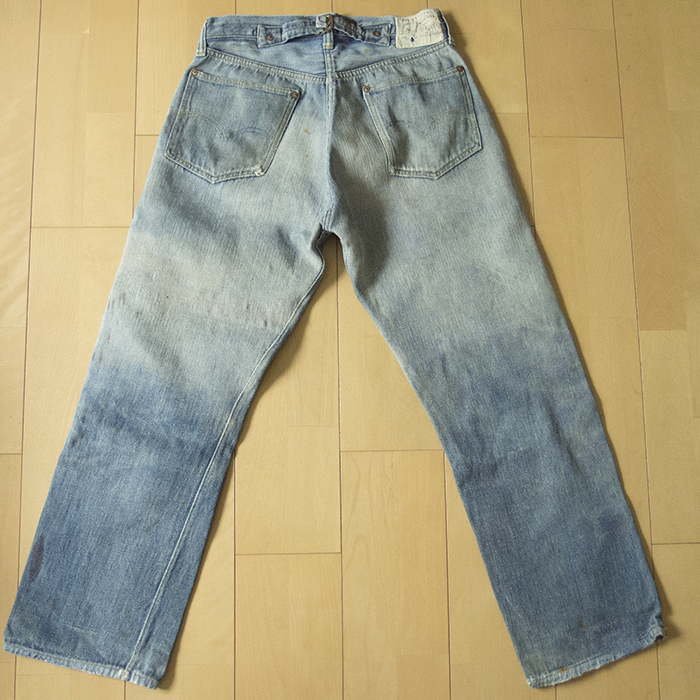 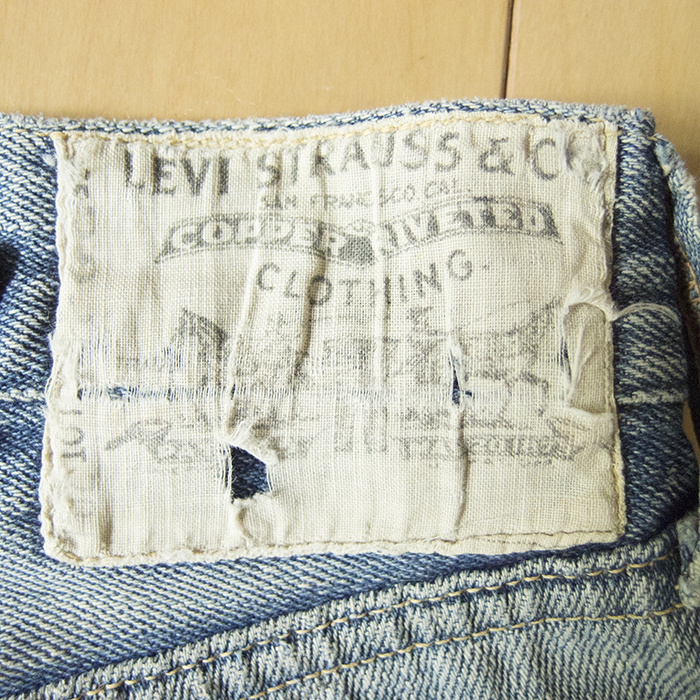 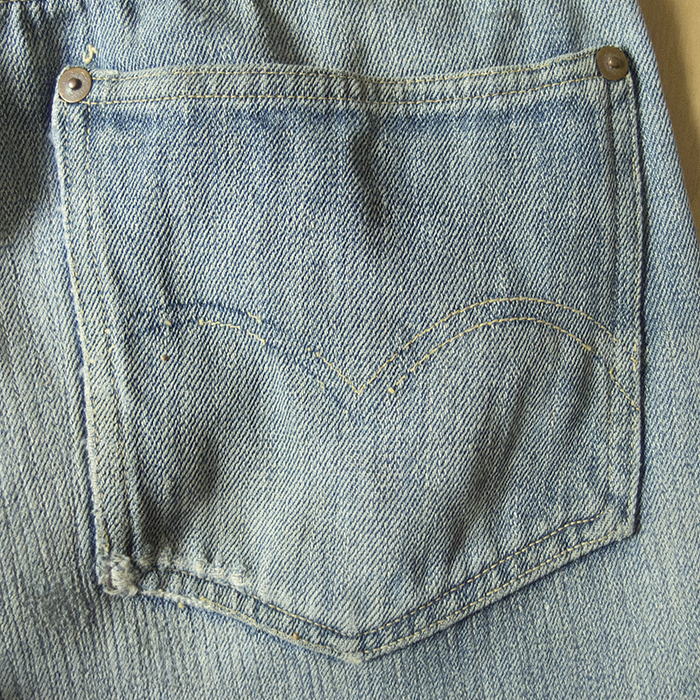 The top of the back pocket is reinforced with bare rivets. The arcuate stitch has mostly disappeared, but not in a very ungainly shape. The photo shows the right pocket, but it doesn't have the red tab. 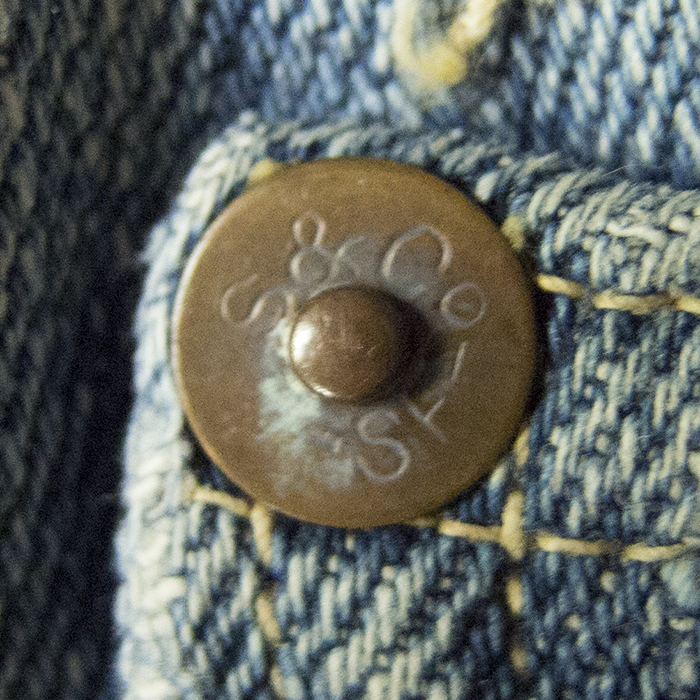 "L.S. & Co" and "S F" are engraved, with the "o" in lower case. It is made of copper because there is no magnet reaction. 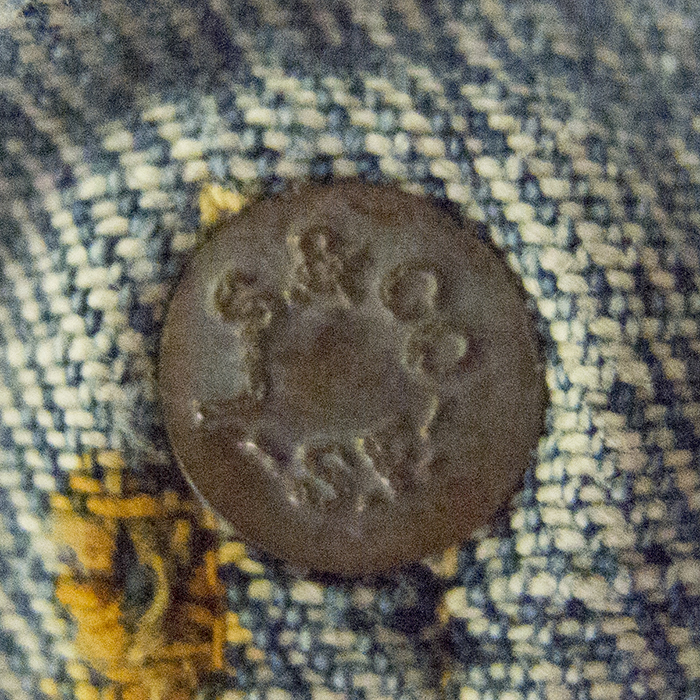 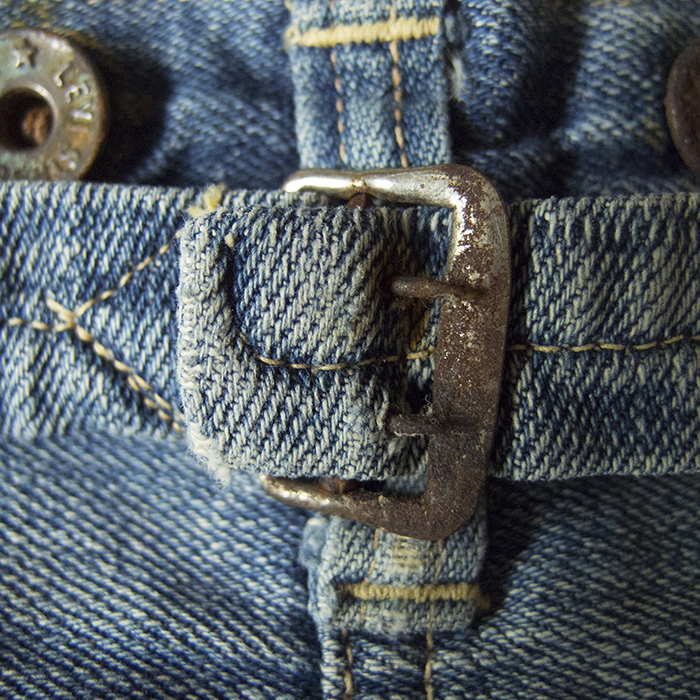 It is possible that the car was originally painted with black lacquer, but it is not possible to tell if it has been painted. Unfortunately, the rust has gotten pretty strong.

It is a steel doughnut button, stamped with "LEVI STRAUSS & CO". The suspender buttons are also the same ones used.

Like the top button, it's an iron donut button with the same engraving. Interestingly, the fabric of the button part is used horizontally.

Behind the dome-shaped top button. It is made of iron. It's hard to tell from the photo, but the fine pitch chain stitching under the waistbelt suggests that it was made after the mass-production sewing machine was used. 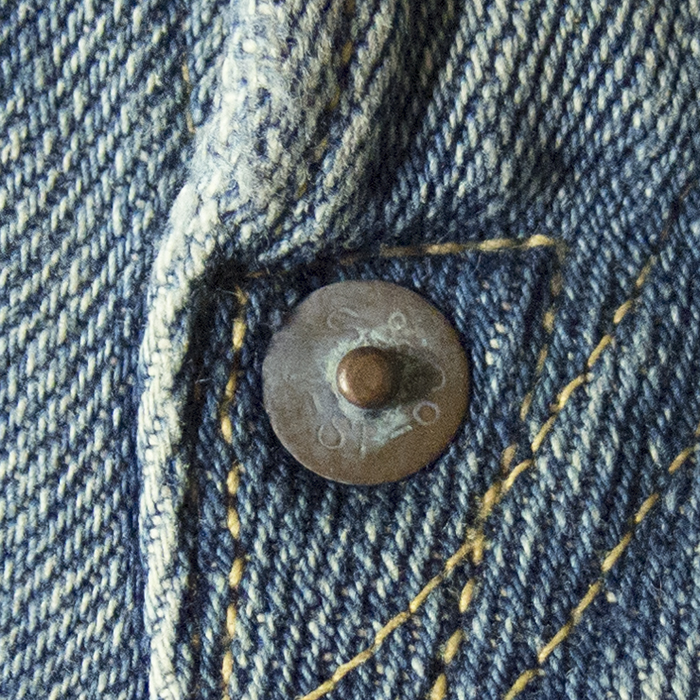 The crotch is also reinforced with rivets as if it was a pre-WWII model. 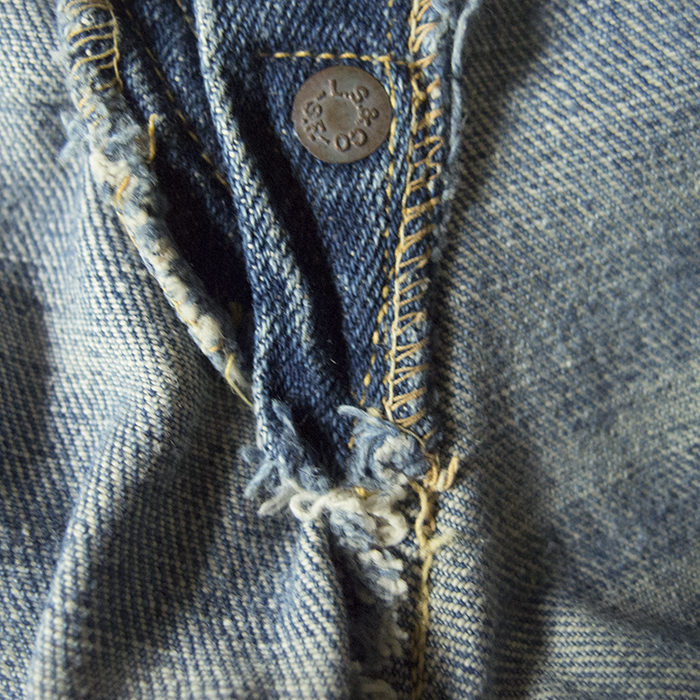 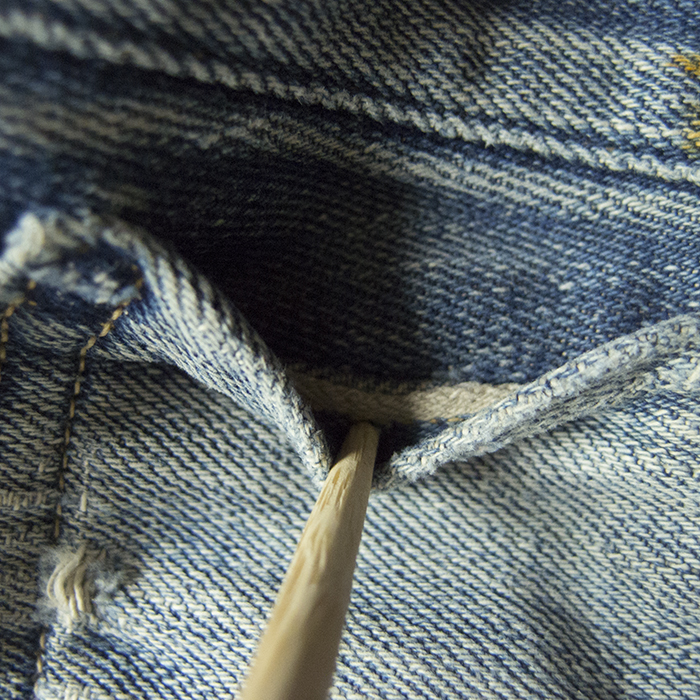 On the back of the coin pocket, selvedge part is used. 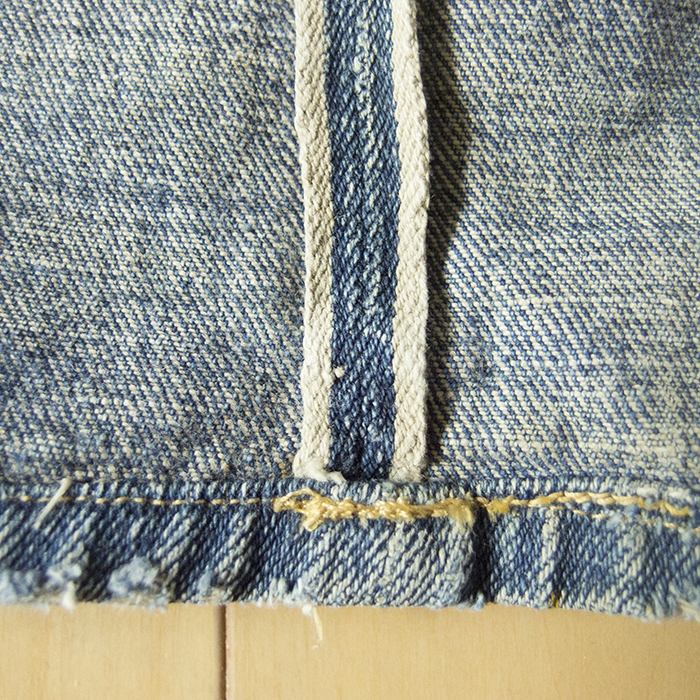 It may have been a blue line, but it is impossible to tell if it has faded. The hem is stitched in a single stitch, but the stitching looks different from the other stitches, and I suspect that it has unfortunately been hemmed down. 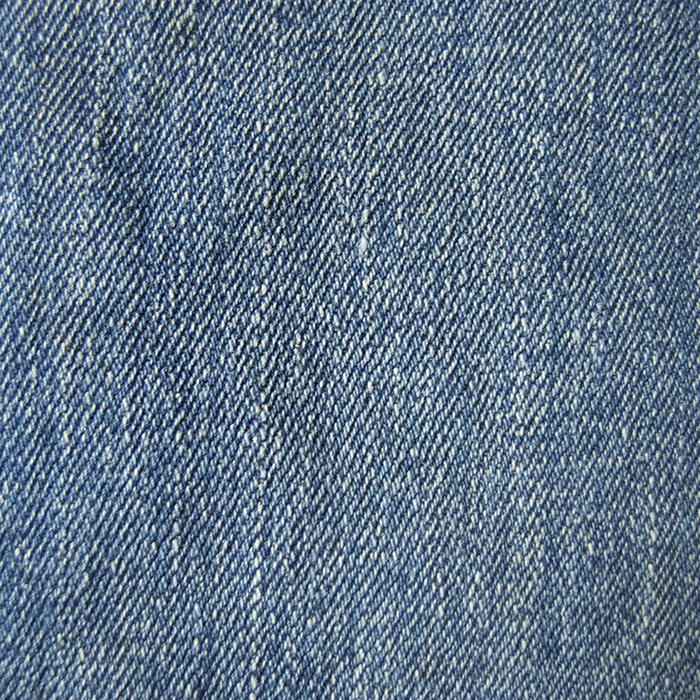 In the darker colored areas, the so-called spotting is noticeable, and the length of the longitudinal drop is also short in many areas. It also has a slightly darker look to it. The fabric does not feel extremely thin to the touch, although it is made from low ounce No.2 denim. The color fading may be due to the advanced surface wear, but the slab feeling is not strong.
HOME | Denim Archieves (in English) | Vintage & Old Denim Bottoms | LEVI'S 201 (1922 model)