No flasher or tag on it, but it's 101Z. The red tag on the center of the waistbelt and other details suggest that it was made in the 1950s, with thick straight lines and bright orange stitching throughout. 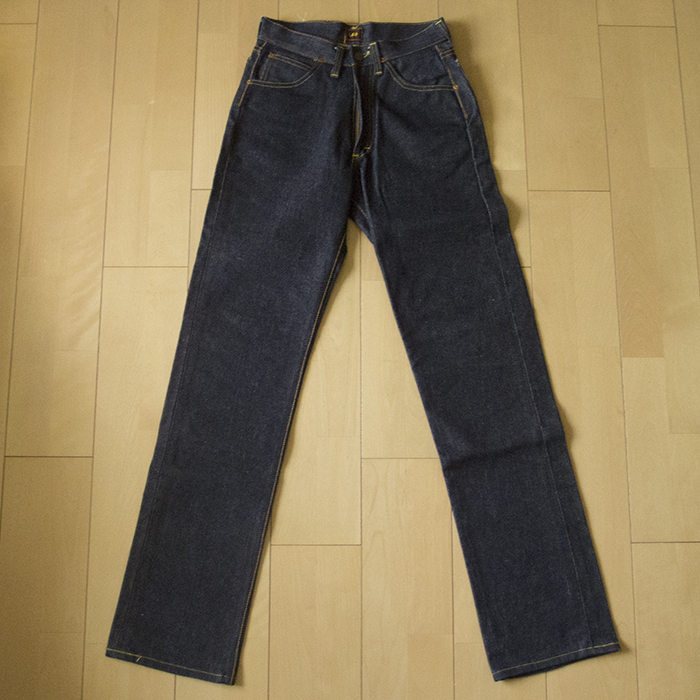 It's hard to tell because the length is so long, but it's quite thick and straight. 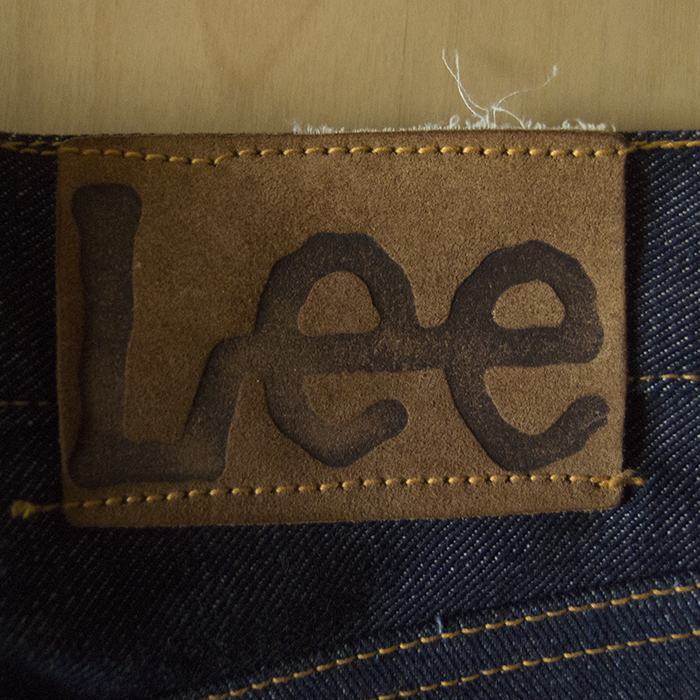 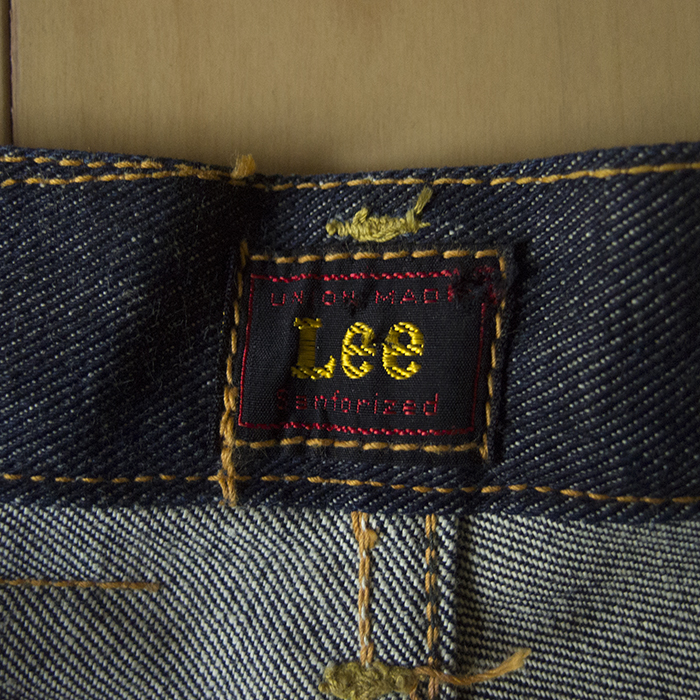 The so-called center red tag attached to the back of the waist belt, in the center of the back." The letter "e" is not slanted. 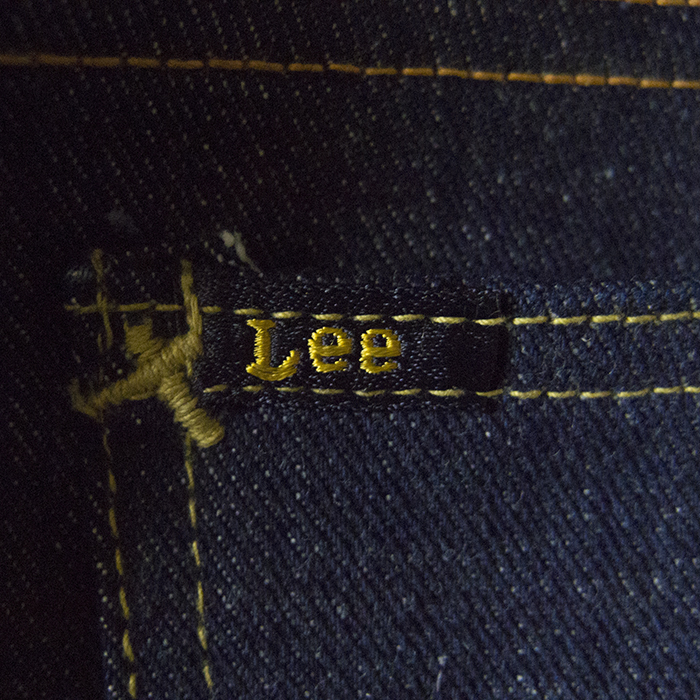 An embroidered tab attached to the right back pocket. After all, there is no notation of "○R" and "M.R.". 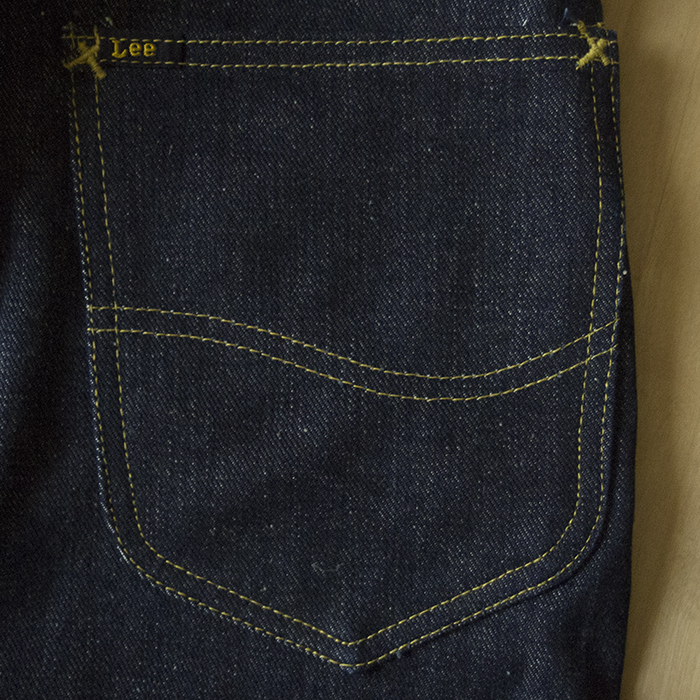 Slightly vertical back pocket. It is very close to the side seam. The cannubis above the back pocket appears to have been stitched rather sketchily. 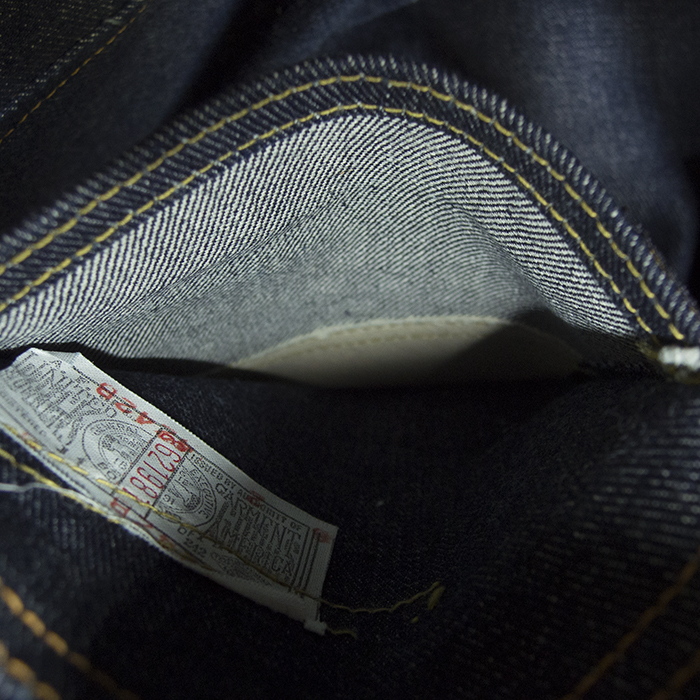 It's a little hard to see, but the lower half is reinforced with a sleek. 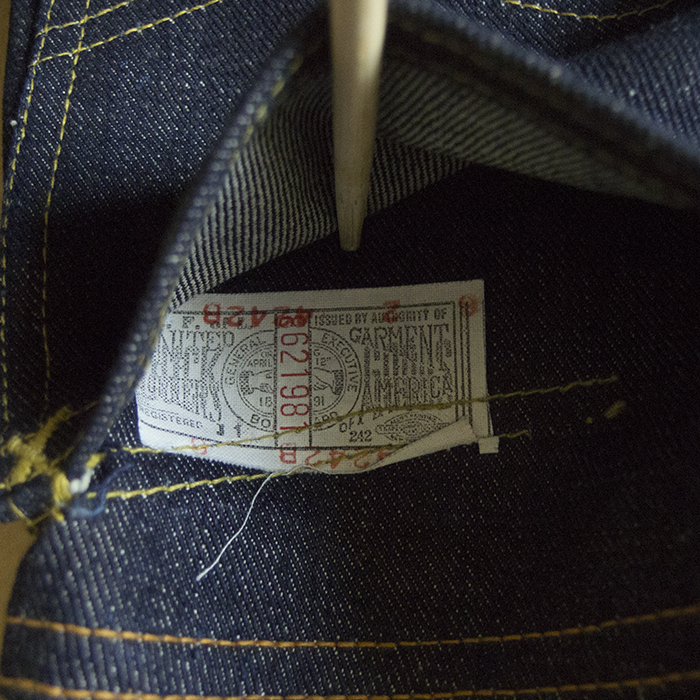 A union ticket is attached to the back of the right back pocket.

I think most later LEEs have the top and bottom attached correctly, but this one is completely sideways. The generosity of those days can also be seen in such places. 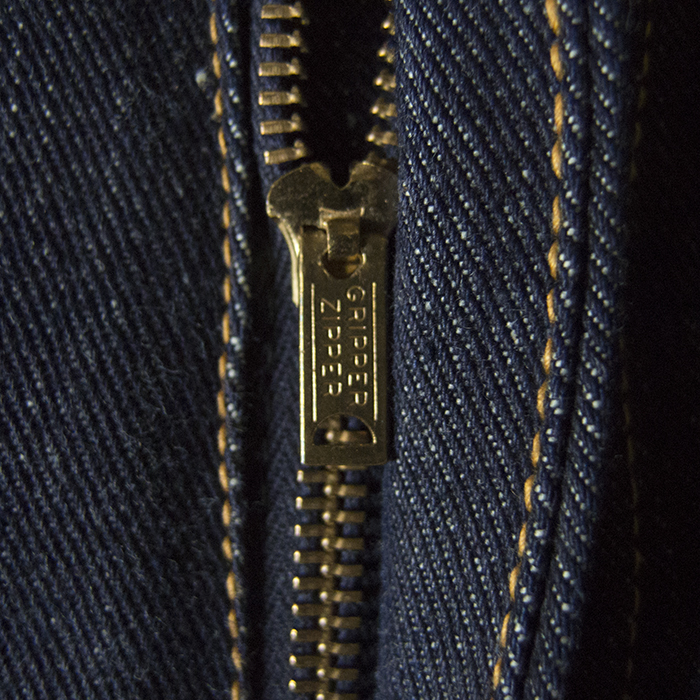 A gripper zipper is used. 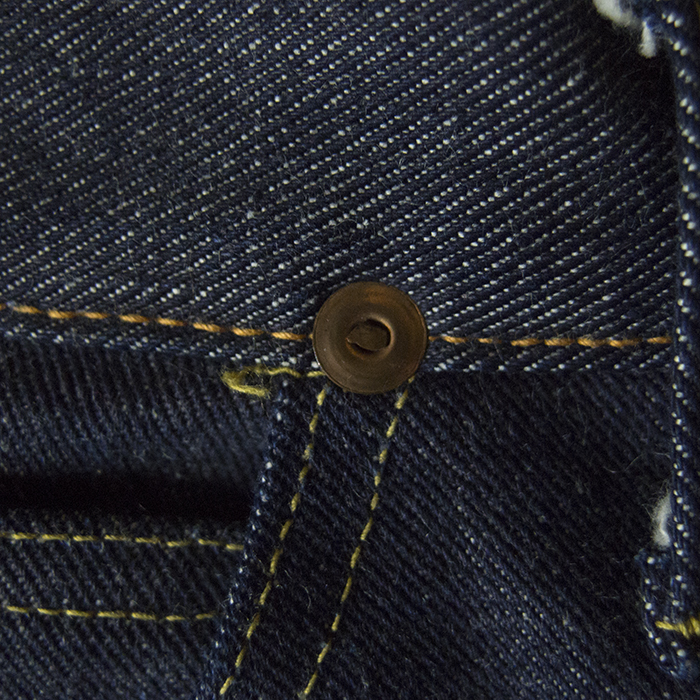 The shape is a normal LEE rivet, but all the rivets are unmarked. It is said that an unmarked iron rivet was used in the Great War period, but this seems to be entirely made of copper as the magnet does not react, and if so, it is unlikely that the Great War period one was appropriated. I couldn't find any unmarked copper rivets by searching on the net, so I was reminded that LEE has a lot of unknowns. 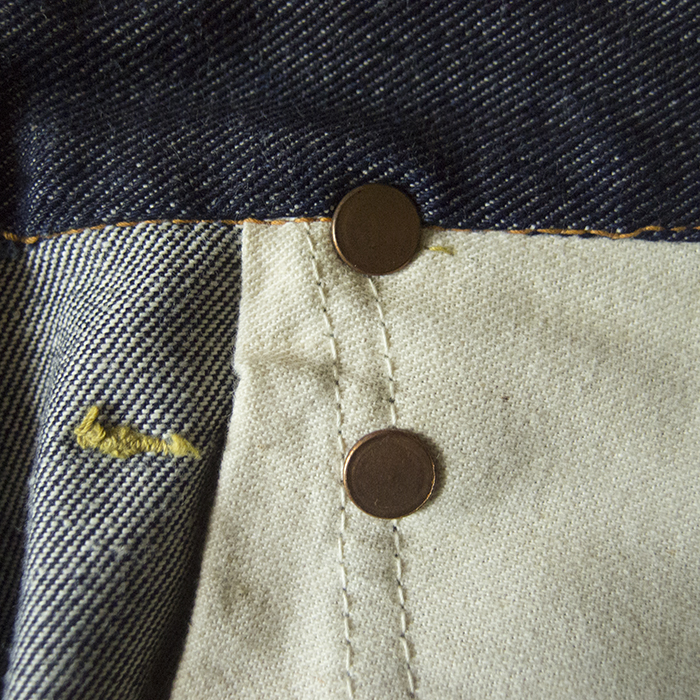 Flat riveted back. The front has no magnet response, whereas the back has a response. It appears to be made of copper-plated iron. 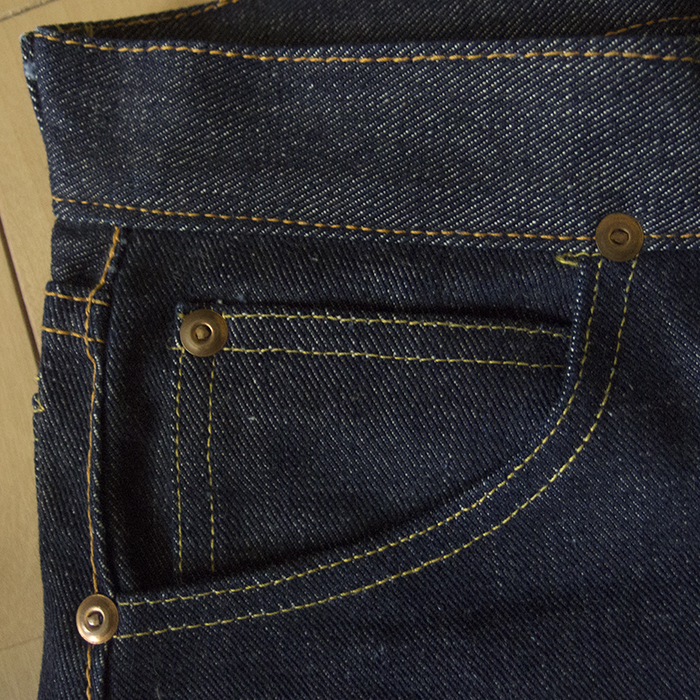 With LEVI'S, which is characterized by the use of yellow stitching and orange stitching, you don't see many rivets covering the waistbelt, but with this LEE, the top rivet is completely covered by the waistbelt. 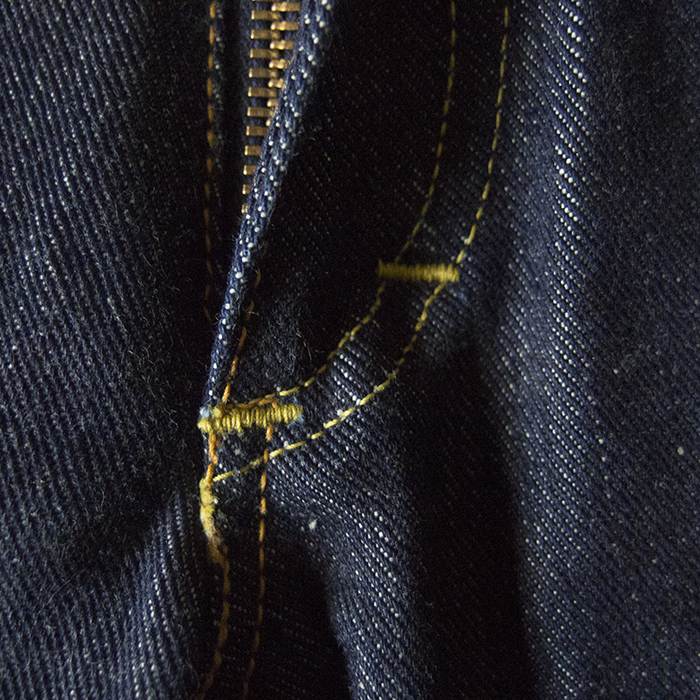 It has been changed to a bar tack stopper instead of a rivet stopper. 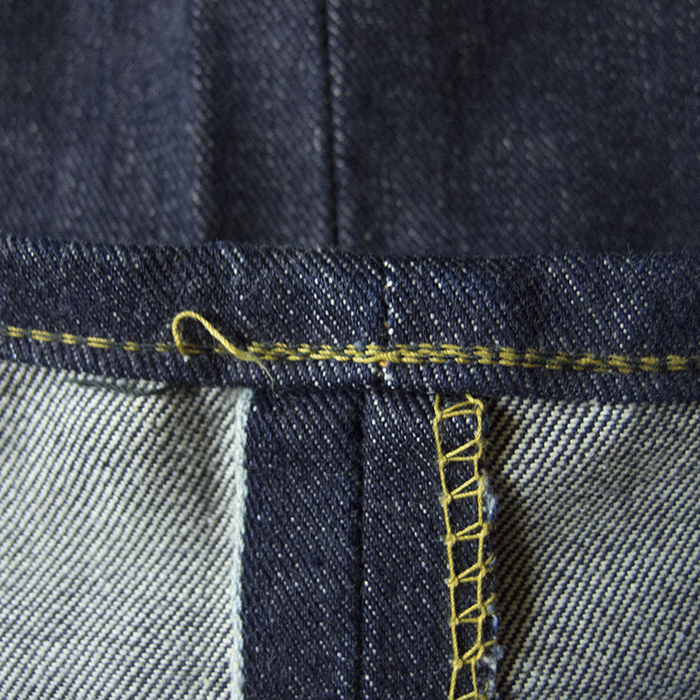 It's in one selvedge and locked in the other. Also, the hem is finished with yellow and blue chain stitching.

Anyway, my first impression was that it was black. The slab and nep feel is also relatively strong. There are no noticeable flaws in the weave, but there are some oddly thick weft threads in places.