The Levi's VINTAGE CLOTHING(LVC), a reissue line of Levi's 1947s 501XX reissue model, white by Cone Denim (formerly Cone Mills) The model is made from Oak Factory fabric and sewn in the US. It's unclear when the model with this part number was developed, but the one shown here was introduced in 2015. It was manufactured. A reprint made in the U.S.A. using fabric manufactured on a loom (*) similar to that used in vintage 501. So, although it was of unquestionable provenance as something that can be manufactured today, at the end of 2017, White The Oak Factory was closed and unfortunately had to disappear.

* According to the Spring/Summer 2013 issue of Inventory magazine, the older looms used in the vintage 501 It was the Draper X2, but it was a reprinted version at the White Oak factory, including the so-called Valencia reprint The Draper X3 was used to weave fabric for Levi's. The Draper X3 was a loom capable of producing wider fabrics than the Draper X2, but the reprint The modifications were made to weave narrower fabrics for the manufacture of Levi's. 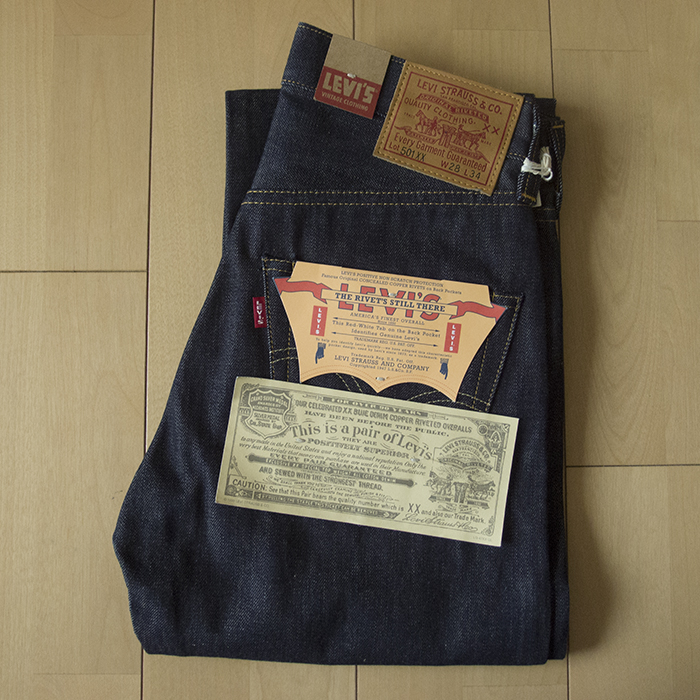 The rigid model has a flasher and, like vintage dead stock, a It comes with a guarantee ticket, which is one of the attractions of LVC. 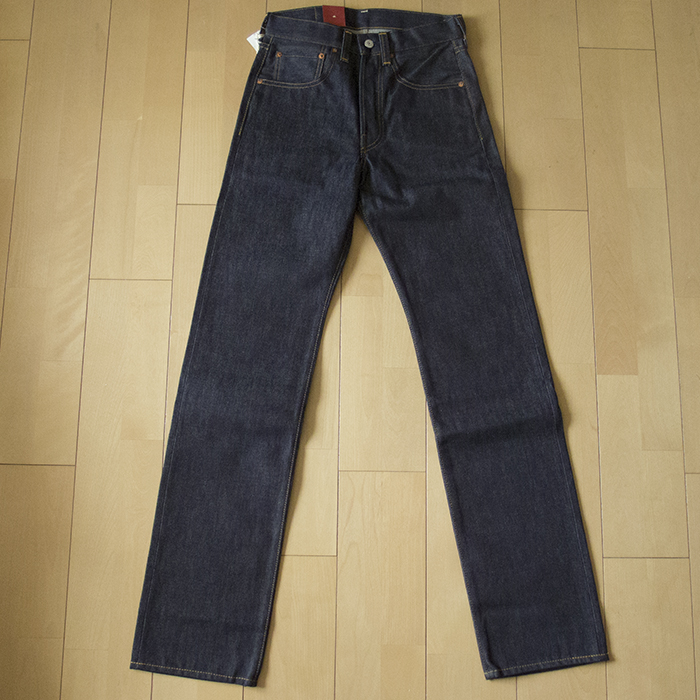 LVC's 1947 model has a slim, straight, not-too-tapered silhouette to the hem It is finished. The length is taken longer, but it looks slender in the photo. 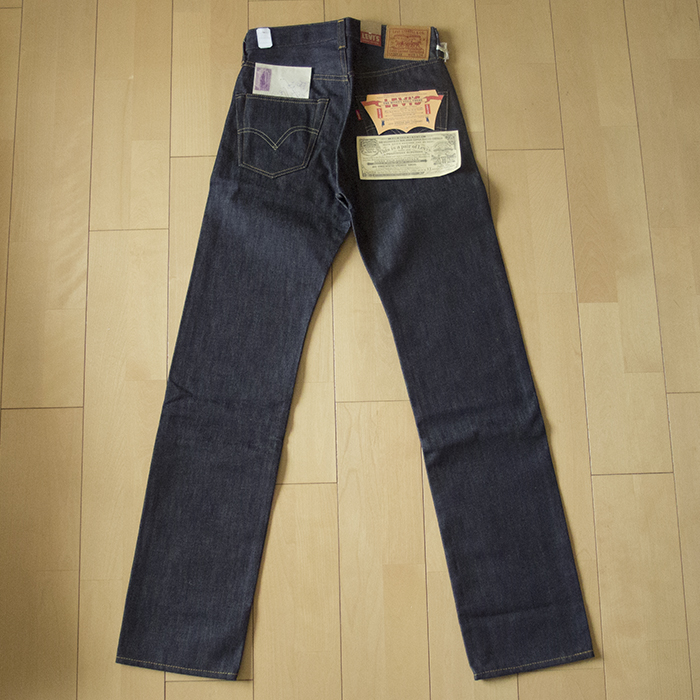 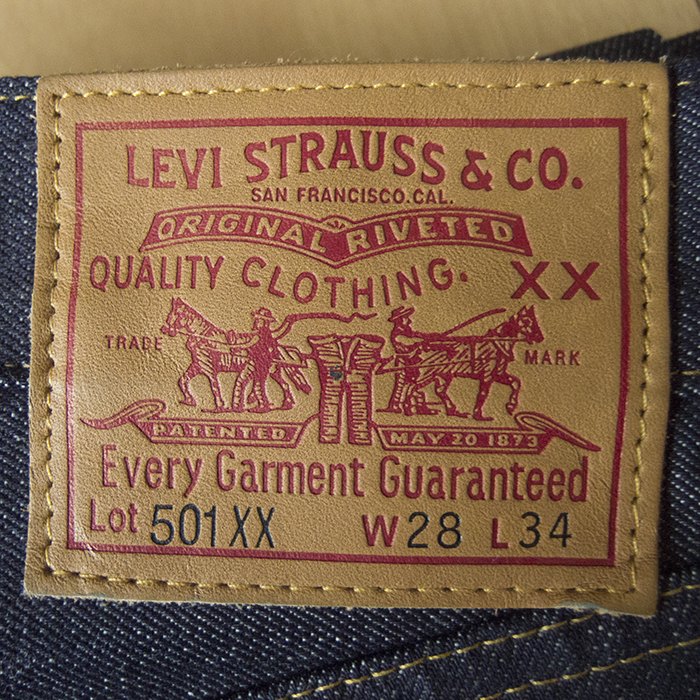 It's a patch of cowhide, not the same as the vintage, and is expected to shrink very little. 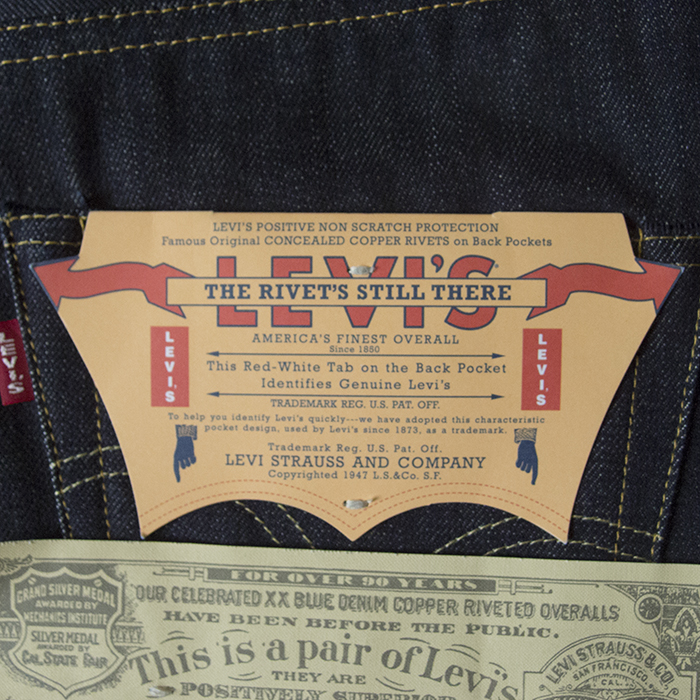 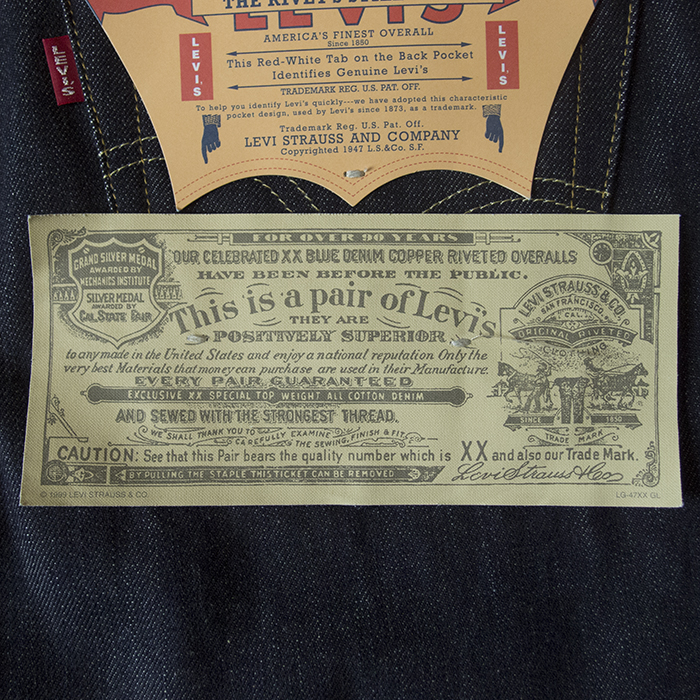 It is made of oiled cloth as well as the single-sided tabbed vintages. However, the number of years of "FOR OVER XX YEARS" at the top is not the same as that of the single-sided tabbed vintages. "70" or "80" with 1872 as the starting point, but LVC uses 1853 as the starting point It's "90" as the number. In the ticket, there is a combination of the notation of the tab era and the late XX era. It has been changed to. 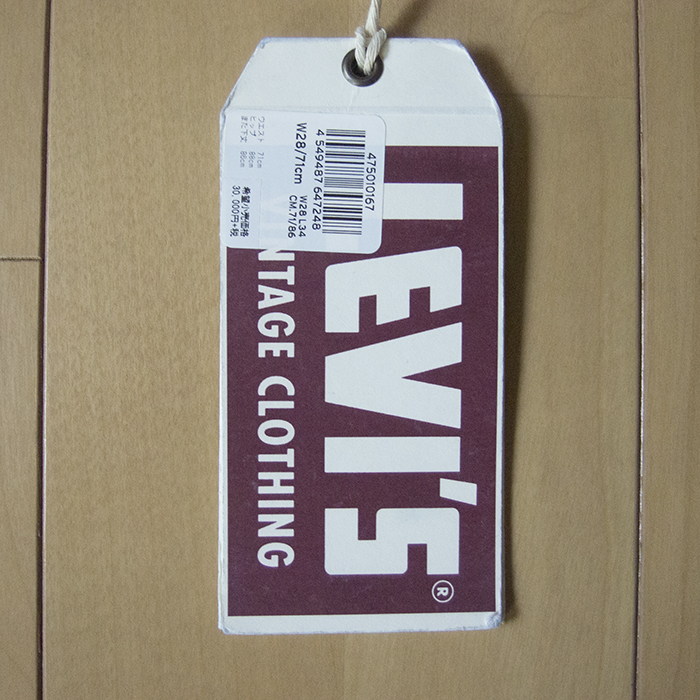 A tag tied to a belt loop. 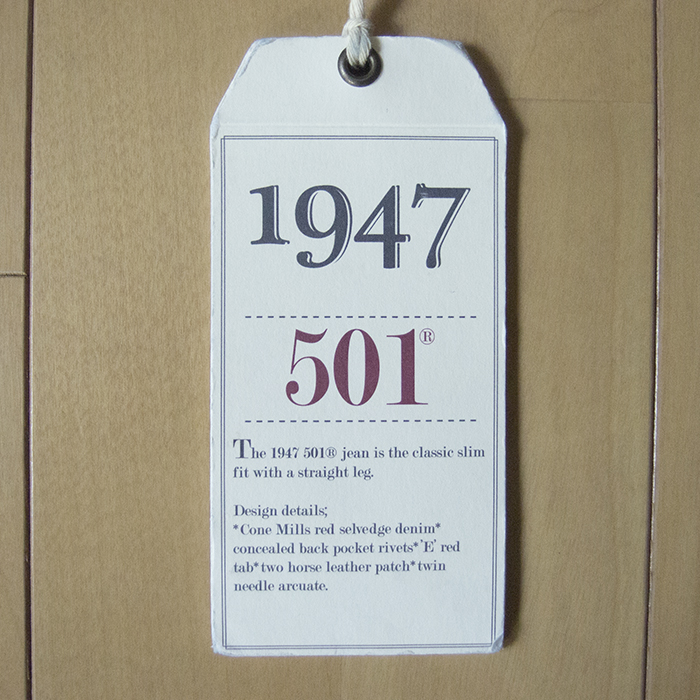 Description of the 1947 model on the reverse (slim and straight) and "Cone Mills" red ear denim It describes, among other things, the use of 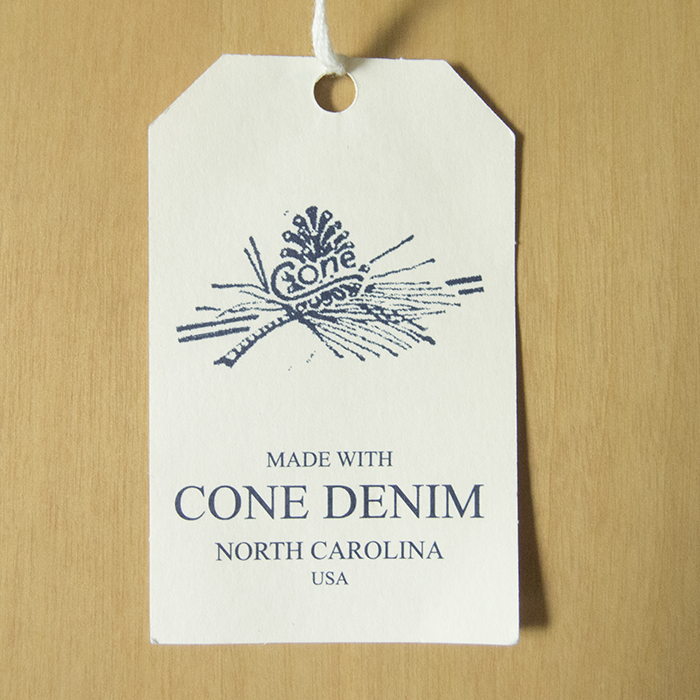 It also has another tag attached to it, indicating that it is made from Cone Denim's fabric. 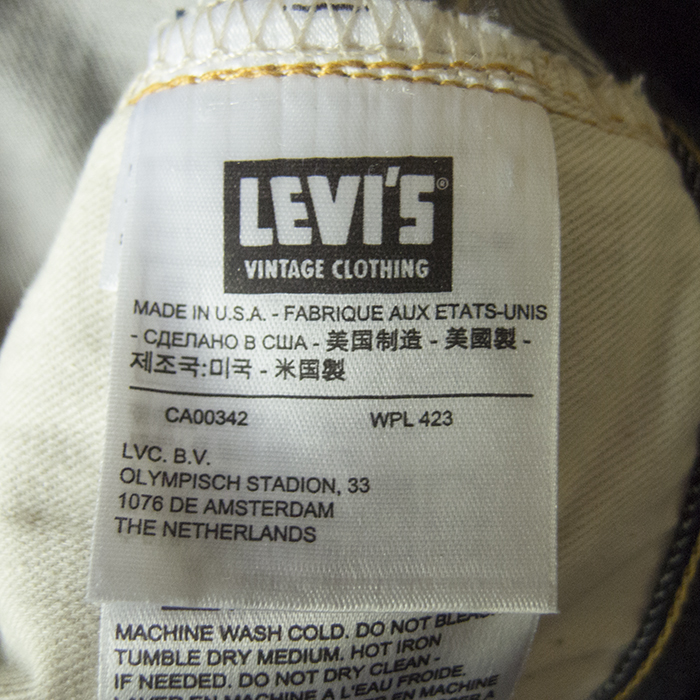 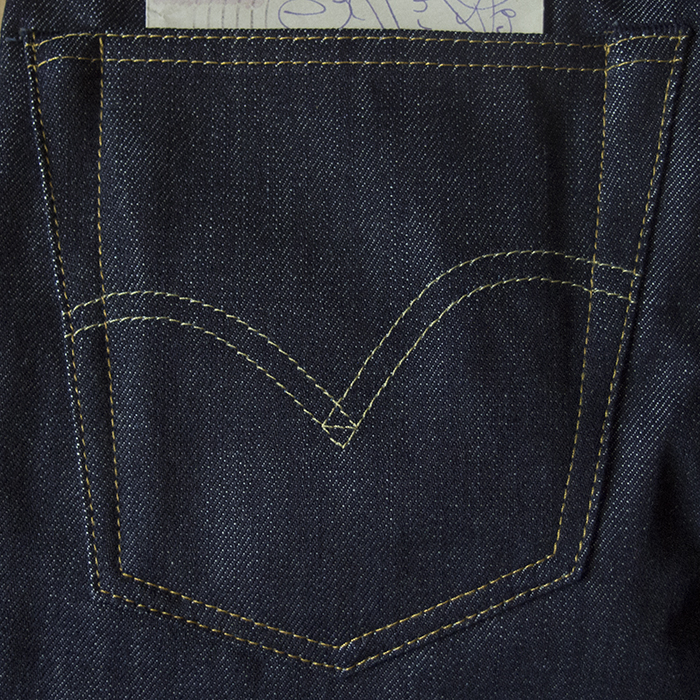 The back pocket is a little longer than the vintage single-sided tabs, but it doesn't let the glue drop and shrink. It is difficult to compare the two. The architeit stitching is yellow. Many single-sided tabs have a lot of yellow stitching, such as the all-yellow ones, but the In the 1947 model, in visible stitching, the yellow is used in It is archaic stitching only. 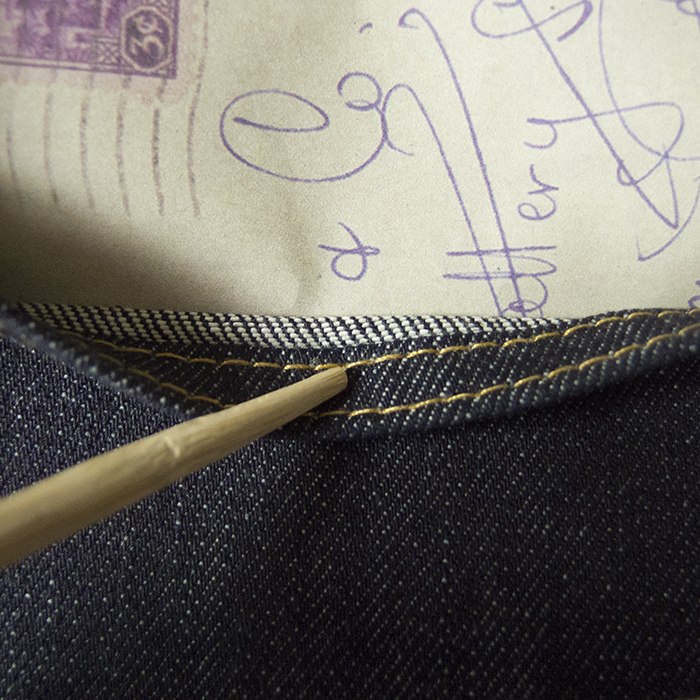 Single stitching. This area follows vintage specifications. There is a letter to the customer in the left back pocket explaining the 1947 model.

"LEVI'S" is embroidered on one side only, the so-called one-sided tab. If it is made of rayon, it will curl up with repeated washing. 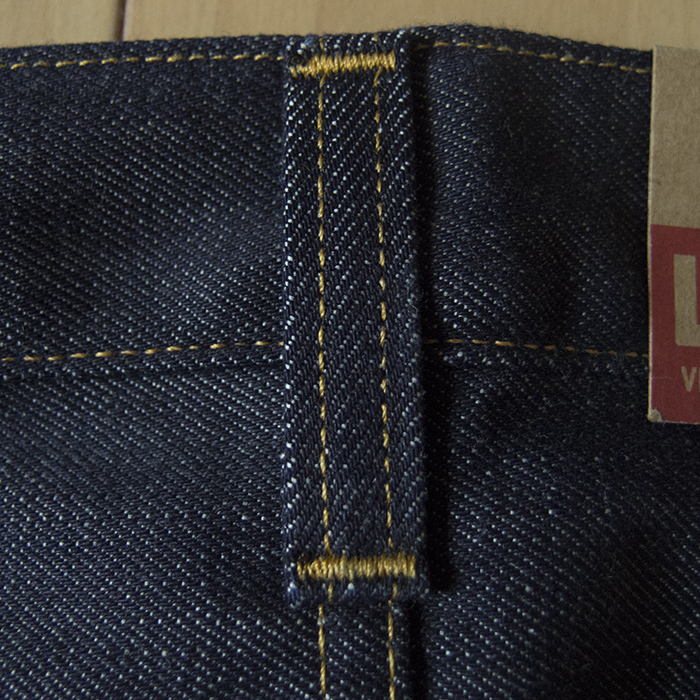 A belt loop along the center seam reproduces the specifications of a vintage single-sided tab It is. The thicker belt loops, about 1.5 inches long, are also in line with vintage specifications. The belt loops are retrofitted and attached with the waist belt. Also, the bar tack at the top and bottom ends are applied completely across the belt loops in the vintage version. , in LVC, it is only in the middle. 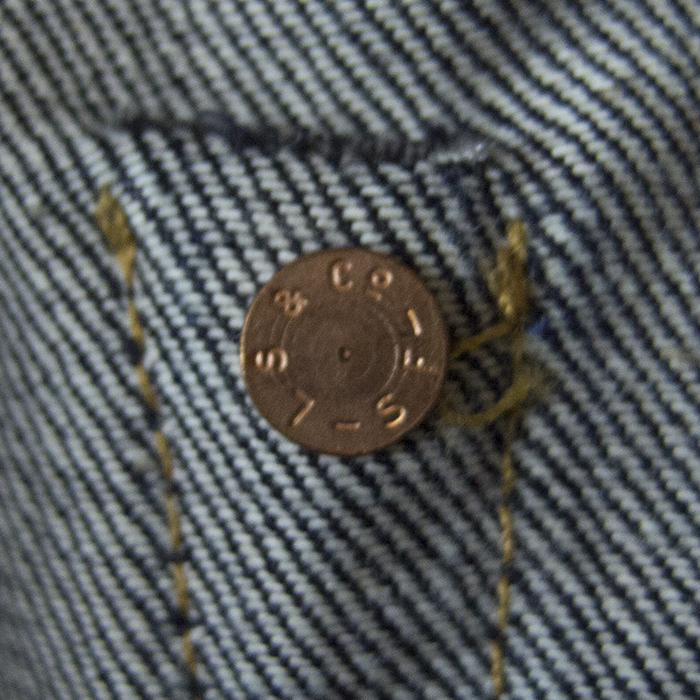 All of the hidden rivets I own from the single-sided tab era have had the rivet edges shaved off a bit to create a slight While it is smoother, the edges are also sharper in LVC. Also, the vintage already used plated iron, but the LVC has no magnet response So it seems that no iron is used. There are differences as mentioned above, but I think the appearance is well reproduced.

There's no difference in appearance from the vintage, except that the engraved letters are just a little bigger The surface has been replicated with a white-colored rustproof finish, as is often seen on vintage ones. Unlike the vintage, there is no magnetic response, although the V-stitching is nicely done. Some people may feel that the vintage look is lost in the process.

If it's a single-sided tab, the 28-inch waist has three buttons, including the top button, while the , the LVC has four buttons. From today's perspective, it might be seen as a defective product if it's adapted to the vintage

The engraving on the back of the top button is "4420". The stitching on the waistband is single stitched like the vintage model. 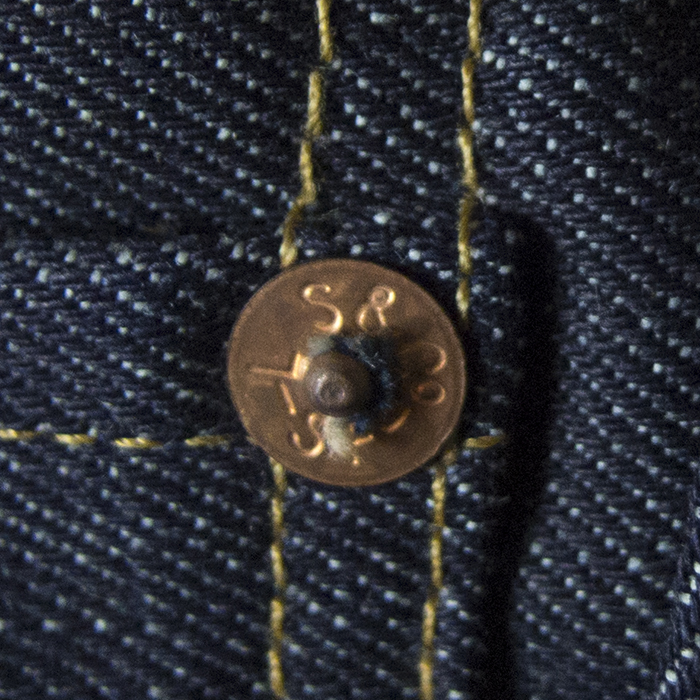 Like the pre-war rivets, the "o" is lowercased, but the "o" is not. The rivets with a lowercase "o" rarely appear on vintage single-sided tabs. It is. No magnet reaction. 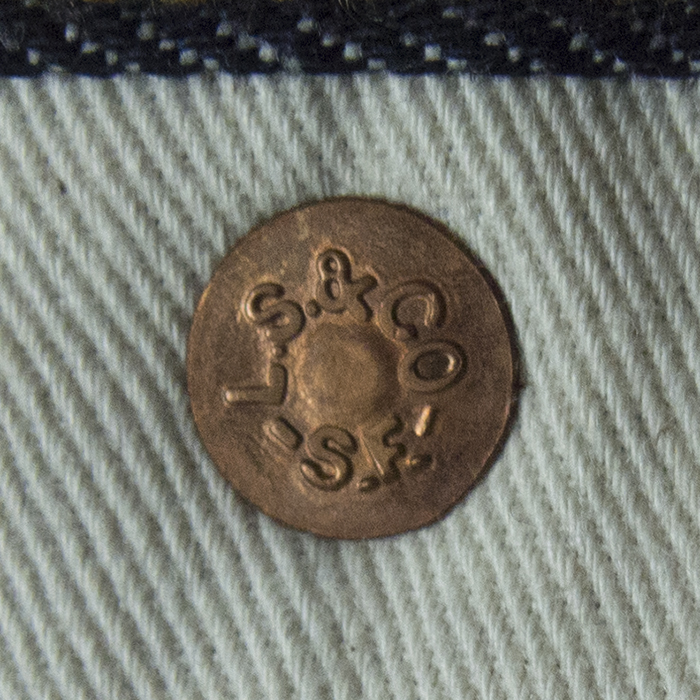 Compared to the vintage, the text is a bit blurred, but it's not as riveting as the front of the rivets. No clear difference. There is no magnetic response here either. 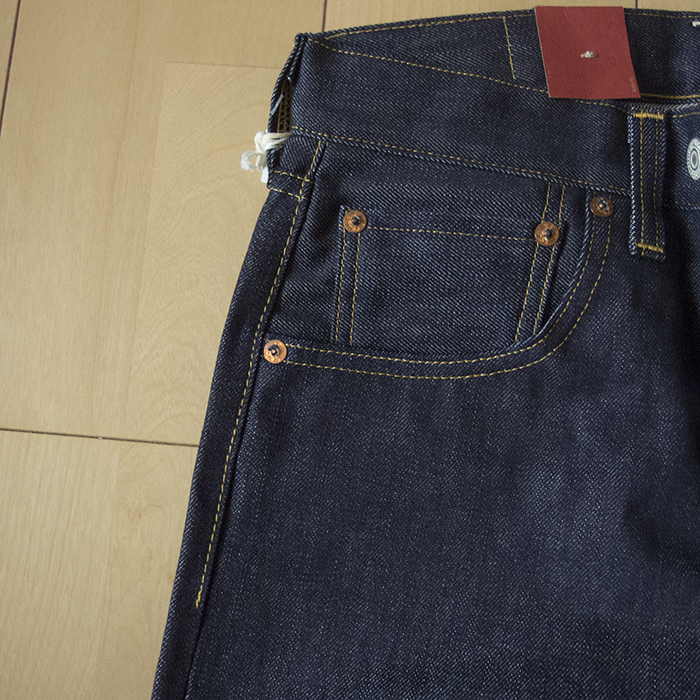 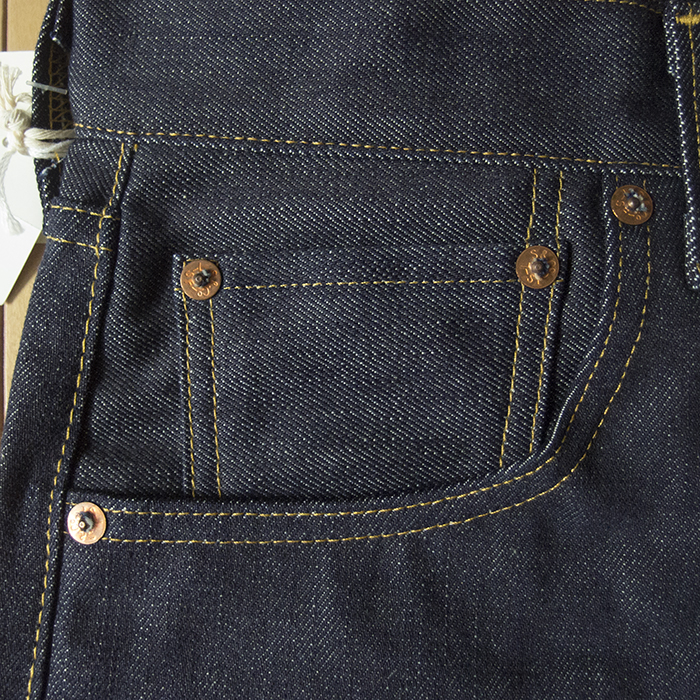 Slightly narrower towards the bottom. Both the coin pocket and the other side of the cloth are horizontally used. 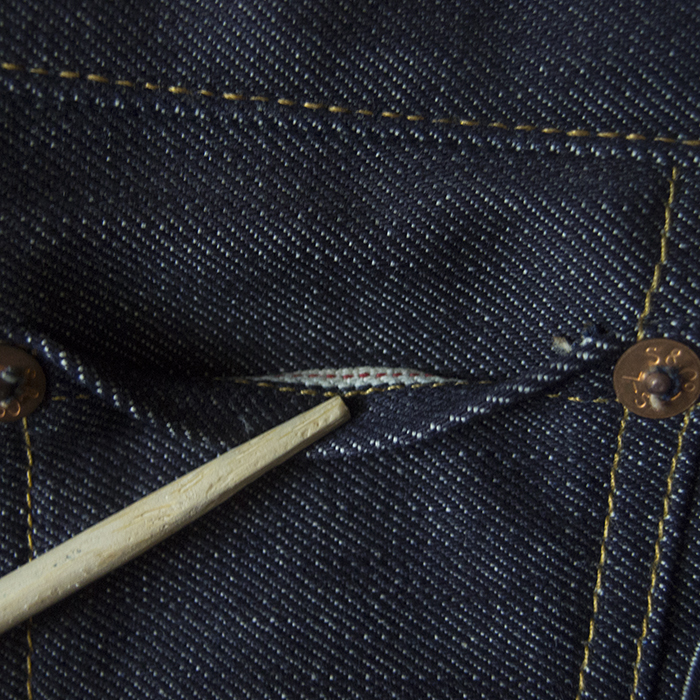 The back of the coin pocket is used for the selvedge. Even in the era of single-sided tabs, the part of selvedge was not always used in vintage, but The specification of the reprinting is easier to understand. 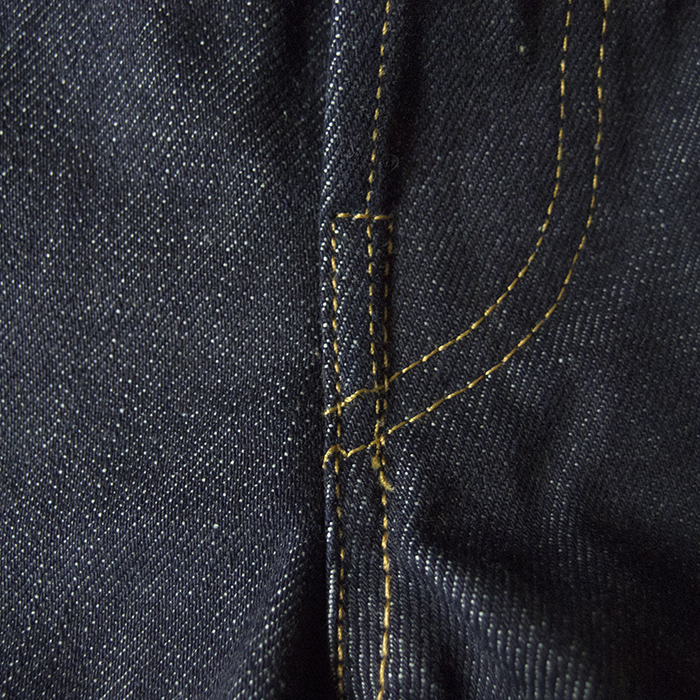 It's not cannulated like the vintage, and the U-shaped stitching is pretty much the same as in the vintage A thicker thread is used, but it's not reproduced to that extent in LVC. 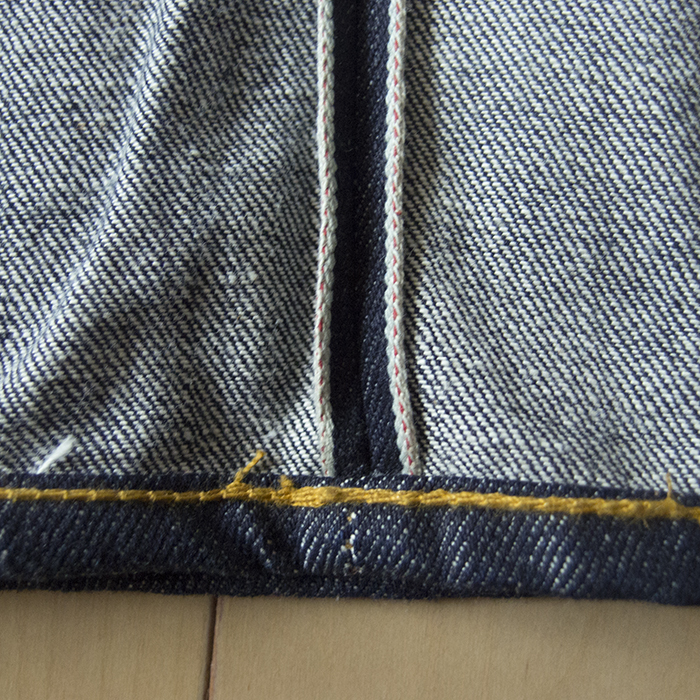 The red ears of a rather bright thread. The hem is of course chain stitched, but I would venture to say that in vintage, yellow is used for the backing thread. In the case of LVC, the backing thread is also orange. 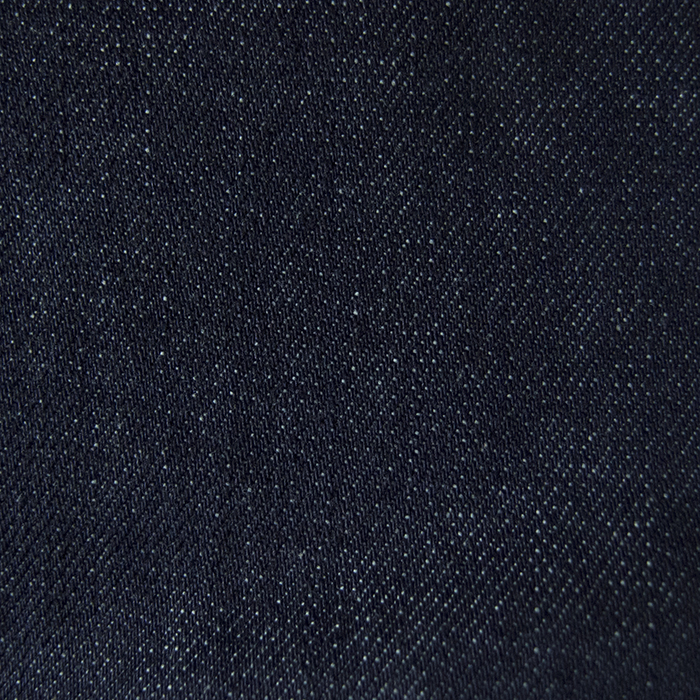 The fabric is made at Corn Denim's White Oak Mill. The nominal ounce count is 12.25 ounces in rigid condition and 14 ounces after washing and shrinking, and I'm not sure if the warp is tightly glued and woven or not. The warp yarn is woven with a tightly glued warp yarn, or maybe the fluff is like It looks like the material is lacking in texture, but once the glue is removed, the original look is revealed. The slubby feel is moderate, but not as strong as it would be with the glue on. Neps are not too many, but small ones can be found in places. The color is a dark blue with a slight gray tint. I've experienced this with other cone denim LVC fabrics, but as it wears in, it's quite vintage. I'm hoping for color as the nearer blue comes into view.