The Levi's VINTAGE CLOTHING(LVC), a reissue line of Levi's There is a 1920s reissue of a 201 model. The cinch back, suspender buttons, and belt loops are all on the "all-in" model. In the case of 501, it corresponds to the 1922 model. This is a product of LVC, an American sewing company, after it became a global line. There is no information about the manufacturer of this fabric, but most of the products made by American sewing companies in those days were made of Cone denim. Considering the fact that the fabric was used by the company and the price, one would expect this to be another Cone denim company. 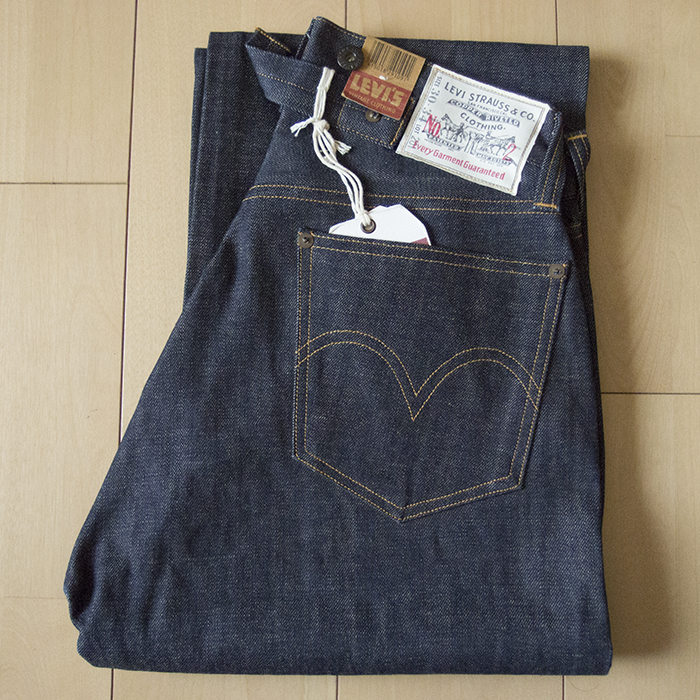 This is a 1920s reprint and there is no flasher on it. It is a reprint of 201 using No.2 denim, so the guarantee ticket is also attached. None. 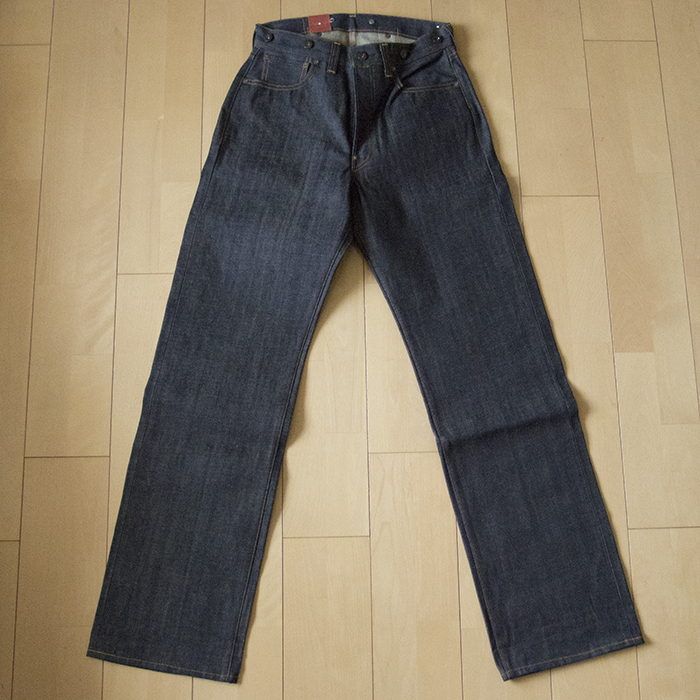 As you can see from the picture, it's very thick and straight. 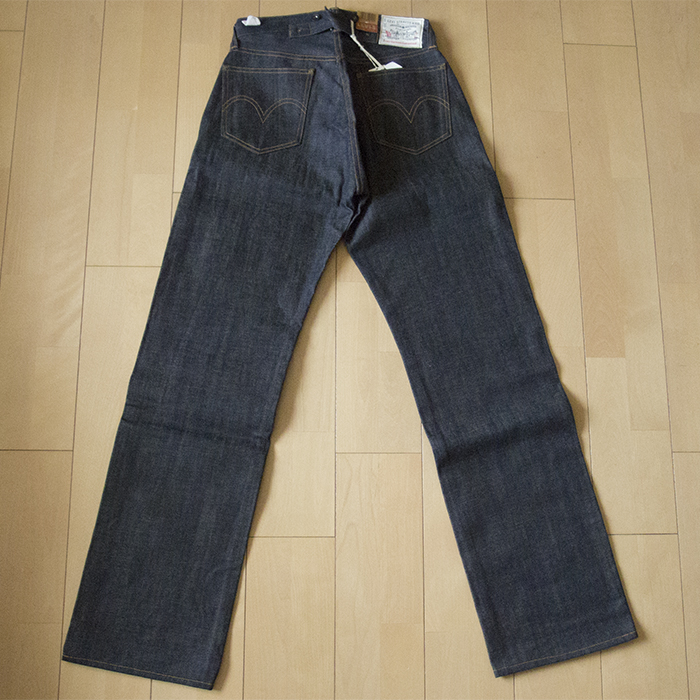 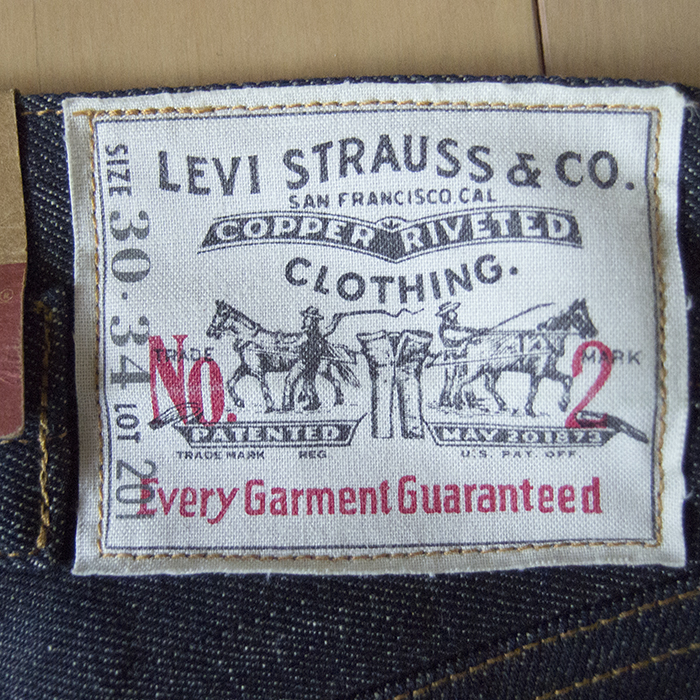 The cloth patch that was attached to 201 has been reproduced. The material of the reprinted one is unknown, although the vintage version is described as linen. 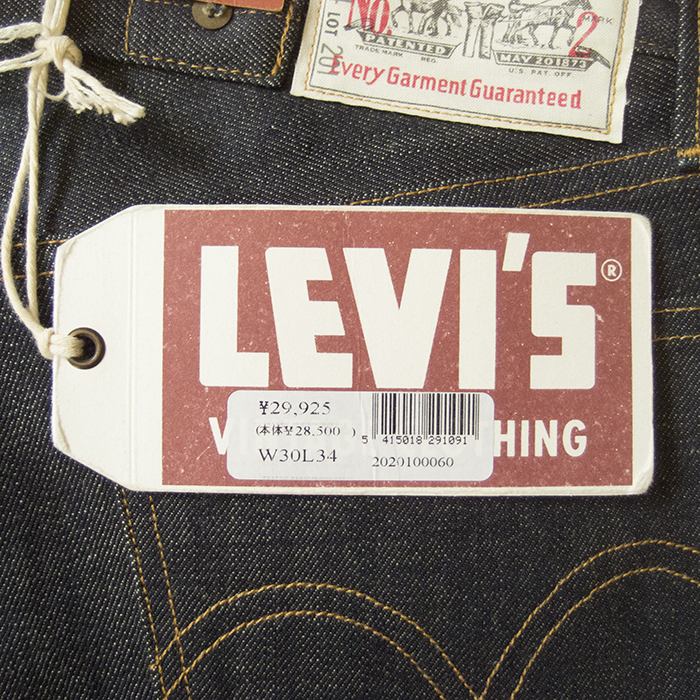 "LEVI'S VINTAGE CLOTHING" tag is attached. It comes in booklet form, and inside, you'll find a description of the detail features and how to bare the cinchback needle Described. 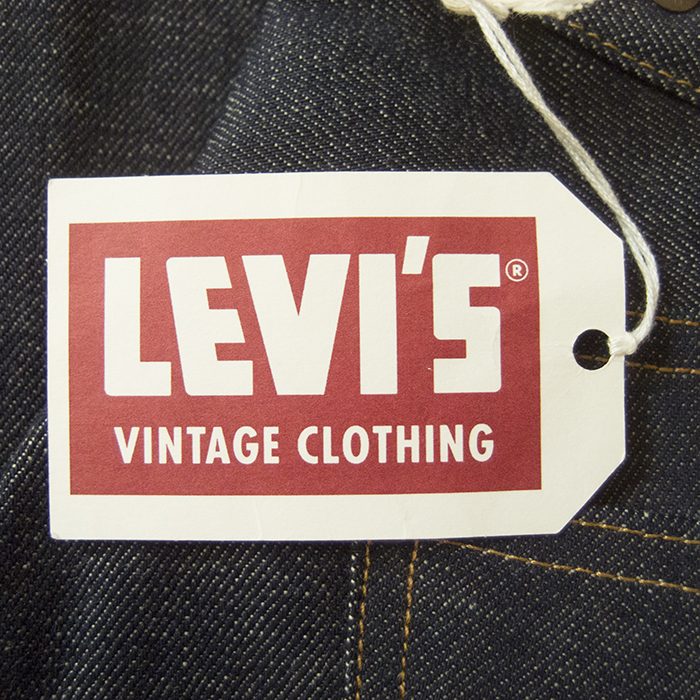 It has another "LEVI'S VINTAGE CLOTHING" tag on it. 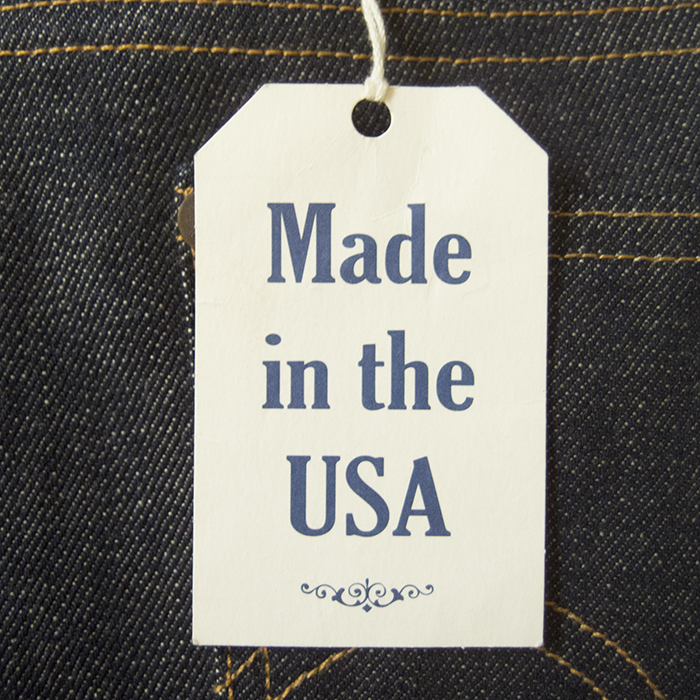 The other tag has "Made in USA" written on the back 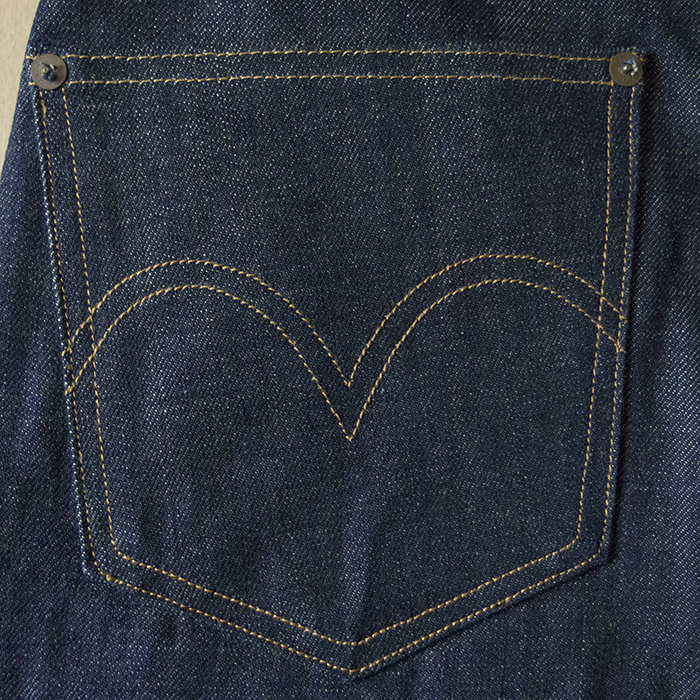 Single-needle archival stitching on the back pocket. The upper pockets are reinforced with exposed rivets. The left pocket is shown here, but the right pocket does not have a red tab.

Black lacquered donut buttons with black lacquer paint, "LEVI STRAUSS & CO" It has an engraving of the The magnetic response shows that it is made of iron, the same as the vintage.

It has a top button and three fly buttons attached.

The engraving on the back of the button was "4420", a familiar number in LVC. 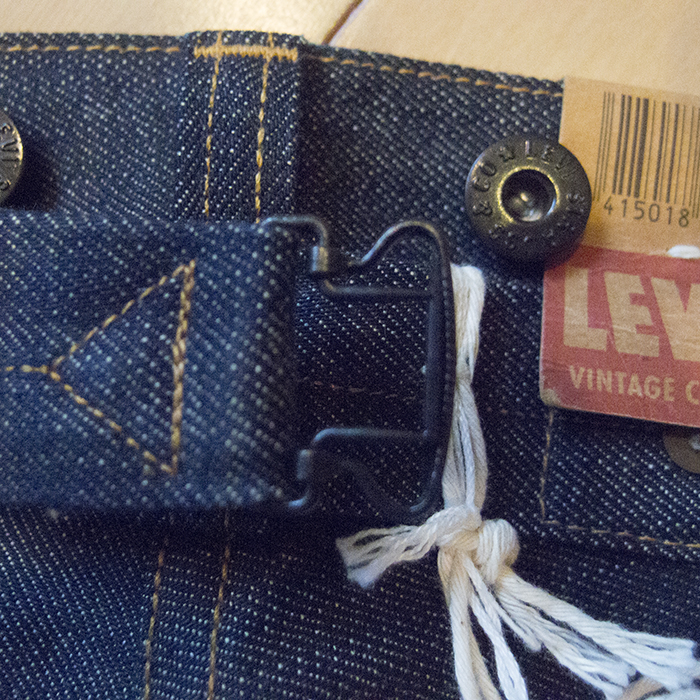 For a 1920s model, suspender buttons, cinch back, and belt loops are all included. They are. The cinchback hardware is made so that when cut with a nipper, it becomes a double-needle, and is shown in the booklet above. The procedure for cutting is explained in the tag. Note that the fittings do not have a magnetic response. 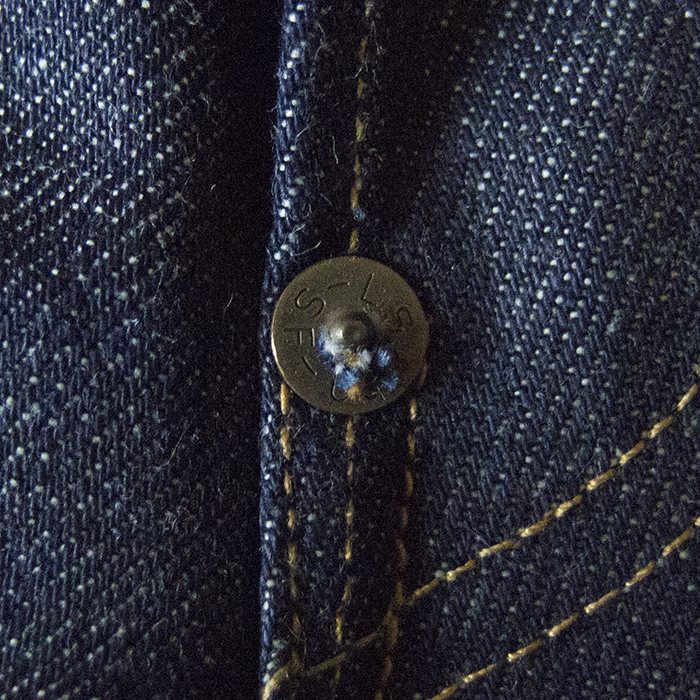 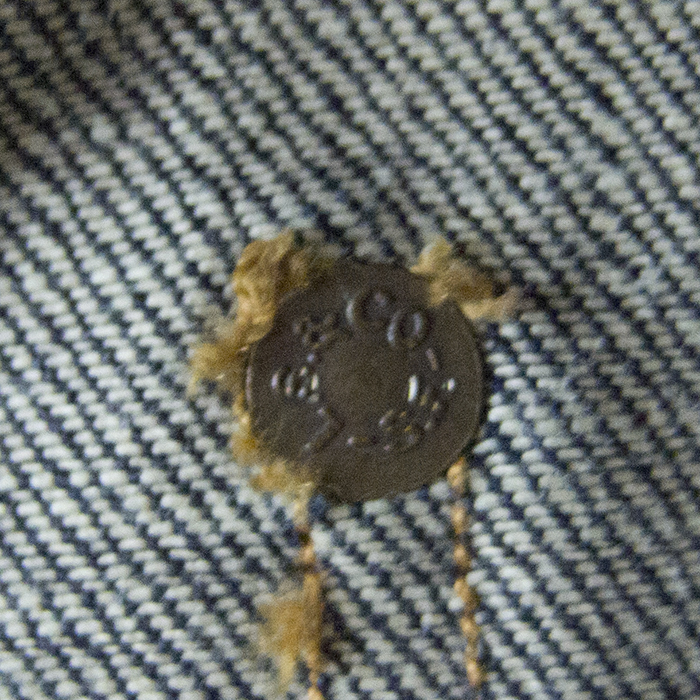 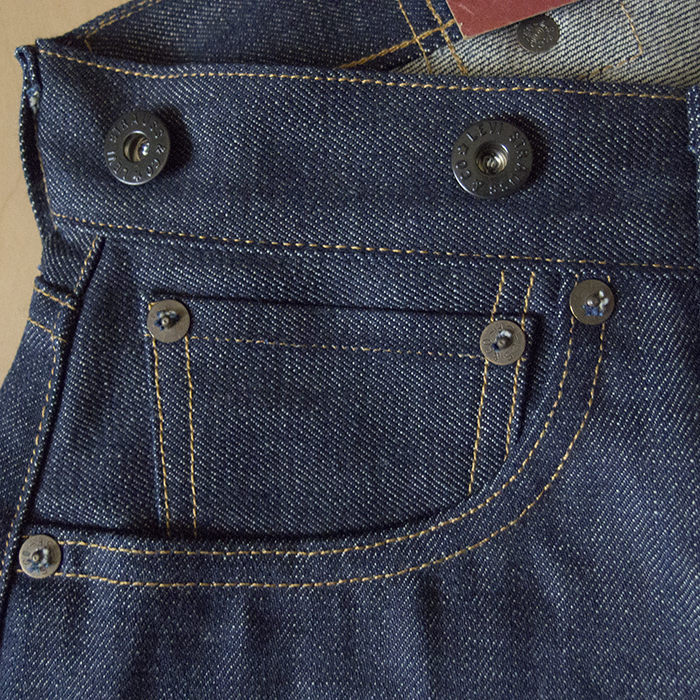 The 201 also has the same coin pocket as the 501. Both the coin pocket and the other side of the fabric are used horizontally. The suspender buttons are the same as the top button. 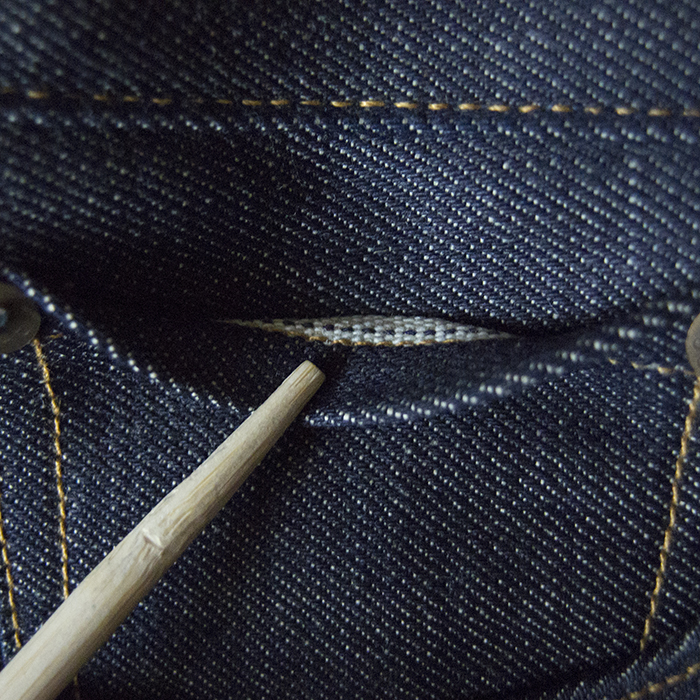 The part of selvedge is used. 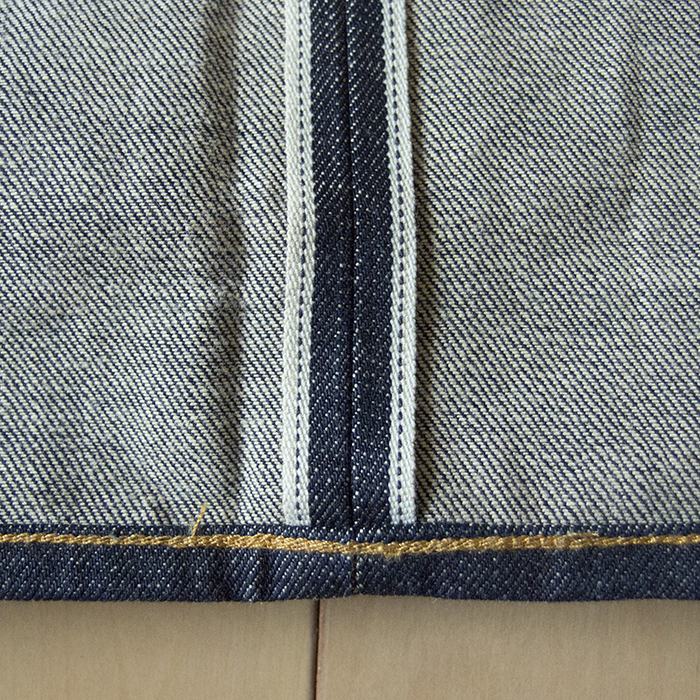 It's a reissue of No. 2 denim, so it has blue ears. Chain stitching at hem. The pitch of the hem stitching is fine. 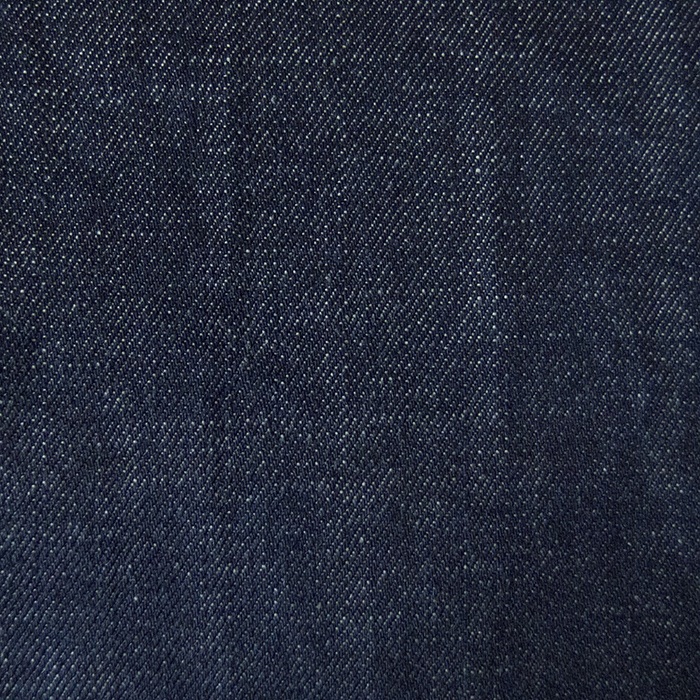 It's hard to tell from the photo, but it's dyed quite darkly, which is relatively high for an LVC fabric. Slubby feeling is more pronounced. Very little neping, but some uneven weave is visible in places.