VICERER was a Japanese jeans brand, manufactured by a company called Sankei Hifuku. According to "History of Japanese Jeans" (Nihon Senbei Shimbun), the company was producing 5 million jeans a year in 1971, which was quite a large scale among Japanese jeans manufacturers at that time. Although made in Japan, it is noted that the flasher is made in the USA. The one introduced here was probably manufactured in the 1970's. Most of them were flared type, but the one introduced here is a standard straight type with unusual thickness. 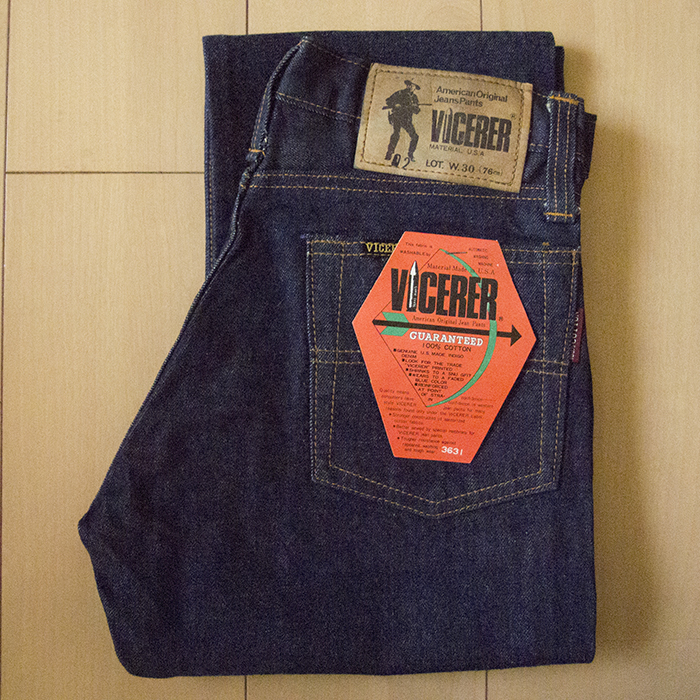 It has a small hexagonal flasher attached to it. Many of the so-called domestic vintage dead stocks were sold after being washed, but I think this one is unwashed although it has absorbed moisture during storage. 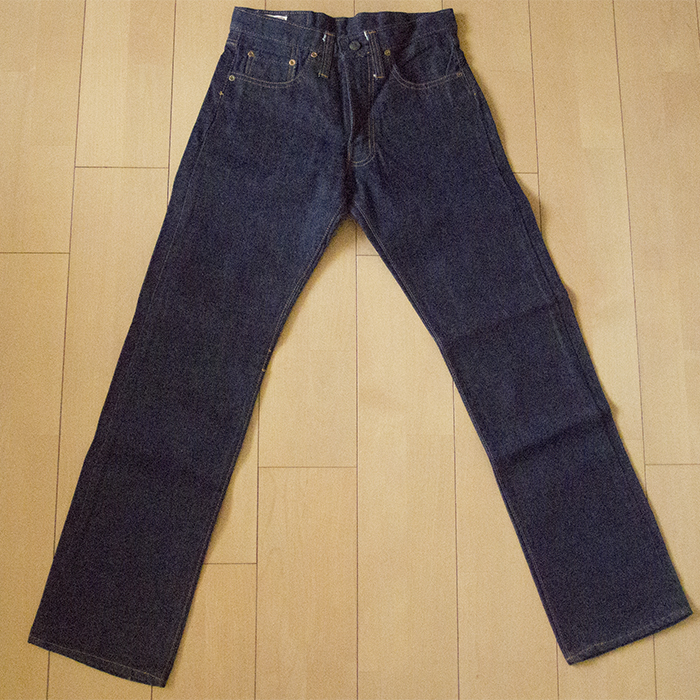 Straight and almost non-tapered. The thickness was probably moderate for the time. As with other domestic vintages, the stitching is all orange stitch with a rather thick thread. 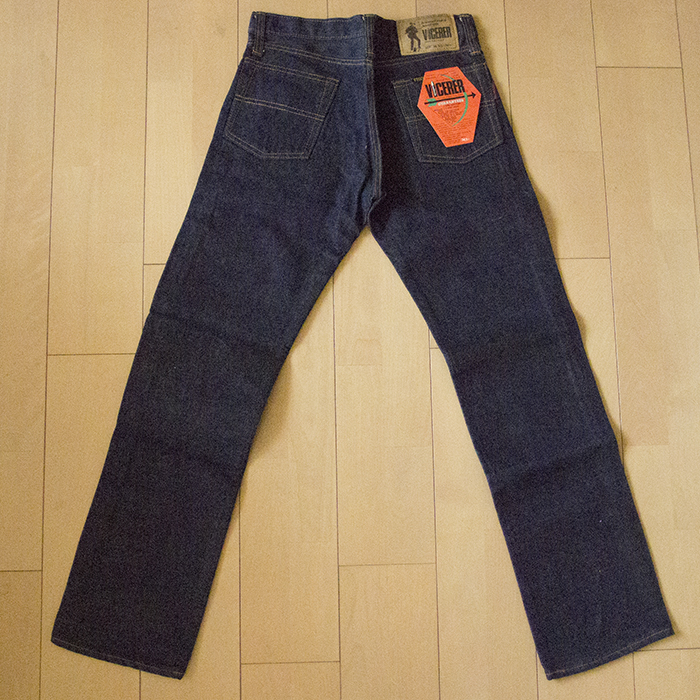 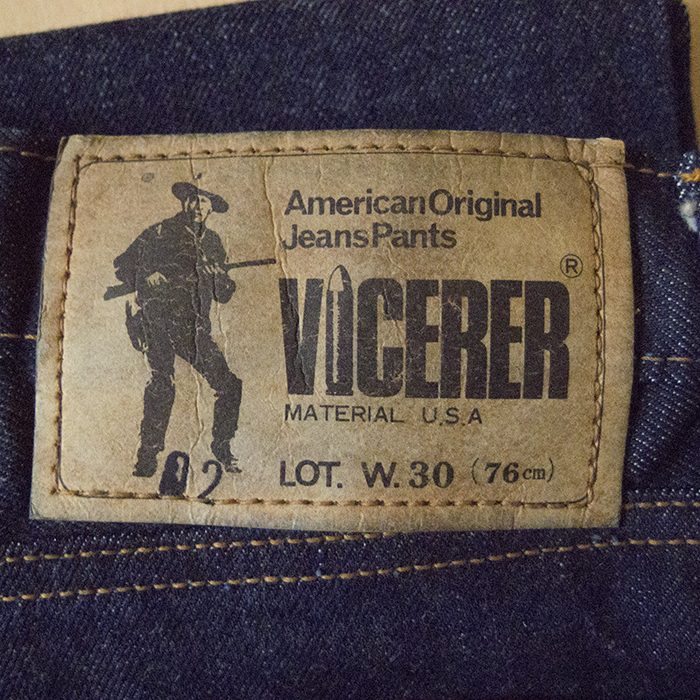 Paper patches that are fully cured. It's printed with a figure that looks like something out of a western." Longing for America is strongly felt in notations such as "American Original Jeans Pants" and "MATERIAL U.S.A.". Is the "02" stamp a lot number? 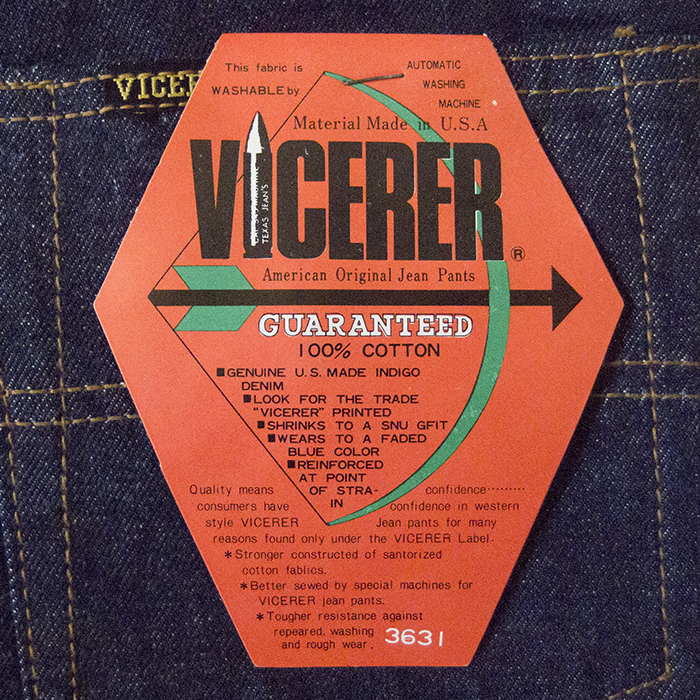 On the small flasher, there are various indications such as "Material Made in U.S.A.", but there is no indication that it was made in Japan at all. 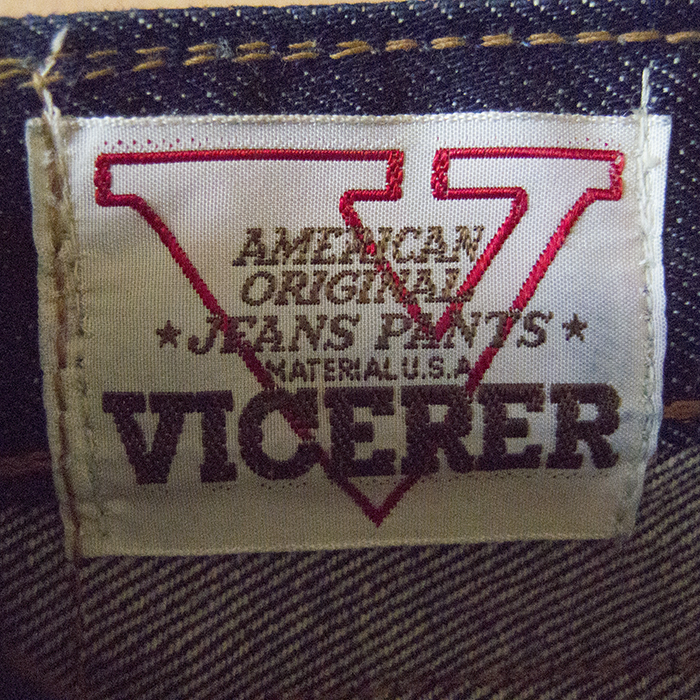 Inner tag attached to the back of the right back of the waist belt. Again, "Material U.S.A." is mentioned here. 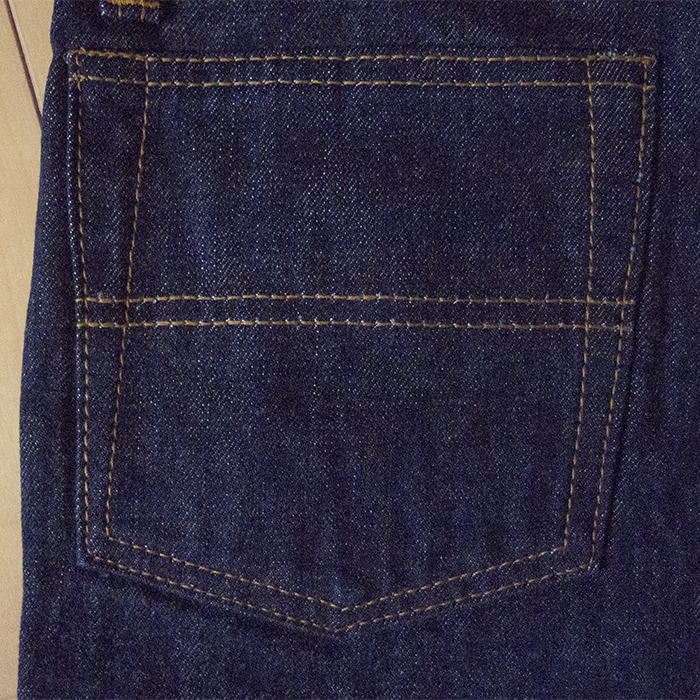 One letter stitch. The photo shows the left pocket, but the right pocket has a pith name on it. 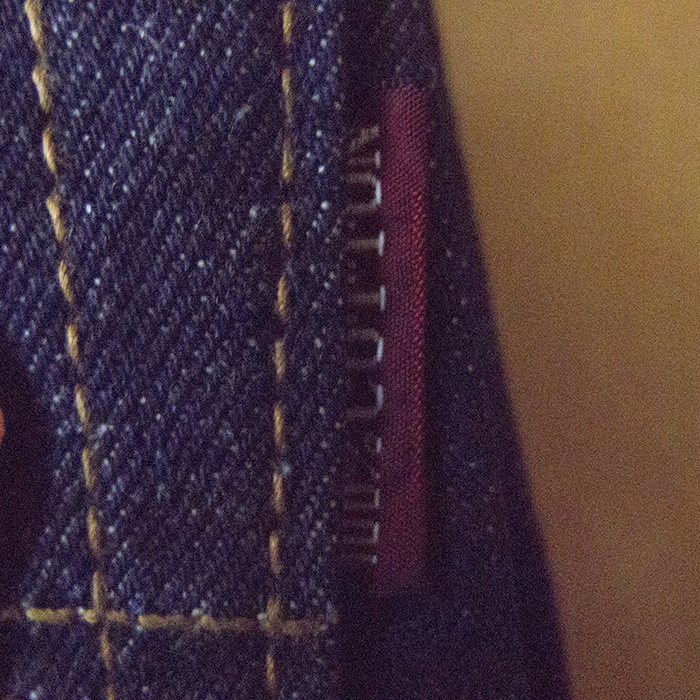 The right pocket has a red tab in the opposite position to the Levi's. It's hard to tell from the photo, but "100% COTTON" is embroidered on one side only.

"VICERER" letter and a button with a laurel-like engraving. It is interesting that the stitching is returned in the opposite direction from the V-shaped stitch of Levi's. 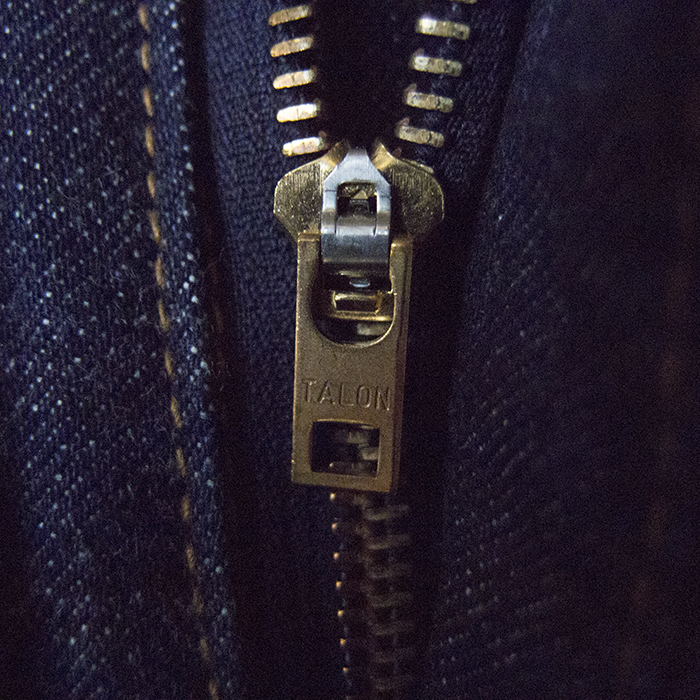 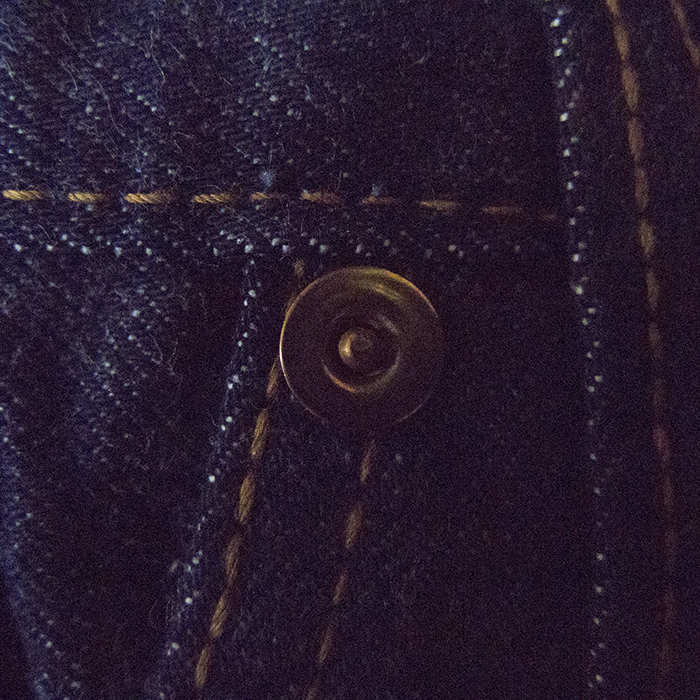 The rivets are flat and uneven in the middle. It seems to be made of plated iron because of the magnet. 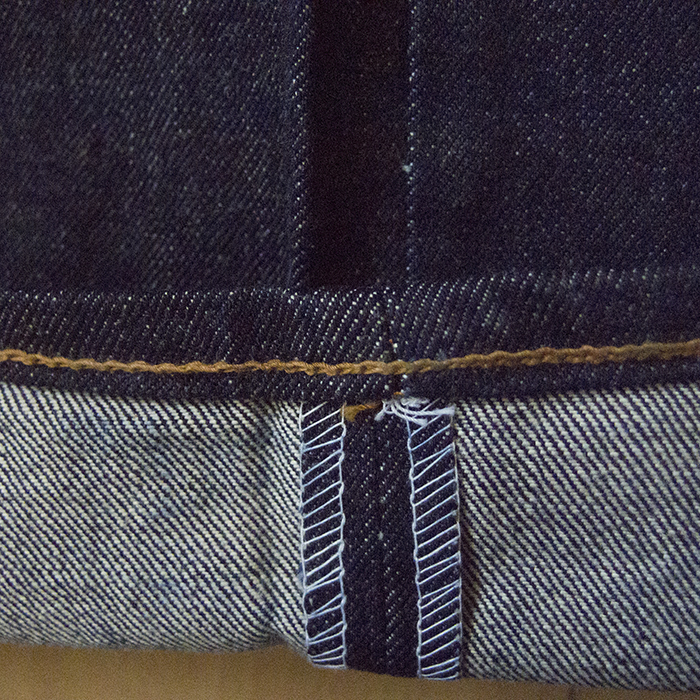 Side split stitching after lock treatment. Chain stitching at the hem. 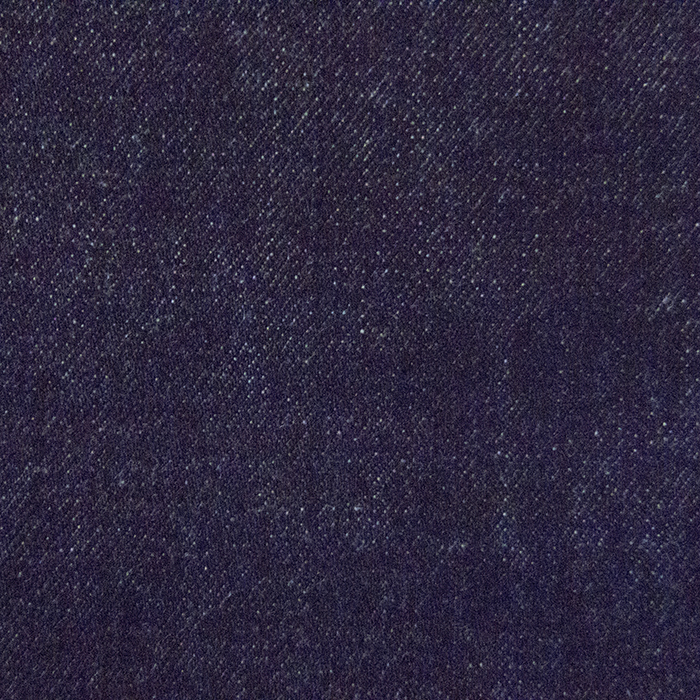 Deeply dyed, this fabric is fairly eye packed despite its unwashed condition. The slubby feel is slightly stronger. The neps are almost absent. There is a slight feeling of fluff.