Edouin 359BF was an early model of Edouin Company (then known as Tokimi Yonehachi Shoten), which was born in 1963. According to the company's website, 359BF "developed and spun 16oz rainbow selvedge denim with ears made from Peruvian tangis cotton, and released '359BF', an authentic pair of jeans made in Japan with an original concept that is consistent from the fabric. It is stated that. Since the production of rope-dyed denim fabrics in Japan began in the late 1960s, the fabric used for 359BF is not likely to be made in Japan, but the fact that they were involved in the planning of the fabric must have been an epoch-making project at the time. The article had such a texture that you could feel the 16 ounce figure as soon as you touched it, and it was one of those bottles that had a distinct presence among what could be called domestic vintages. 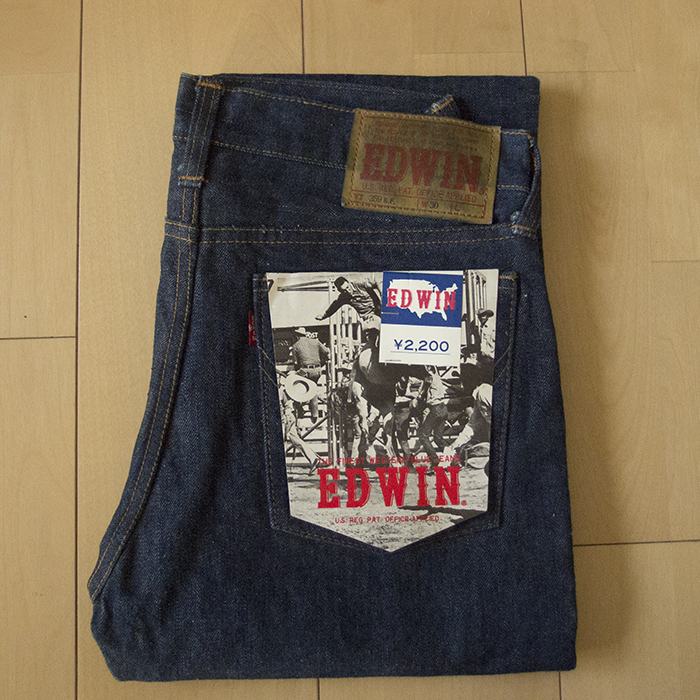 The flasher is large enough to hide a full back pocket, with a paper patch and a red tab. The fabric has been one-washed. 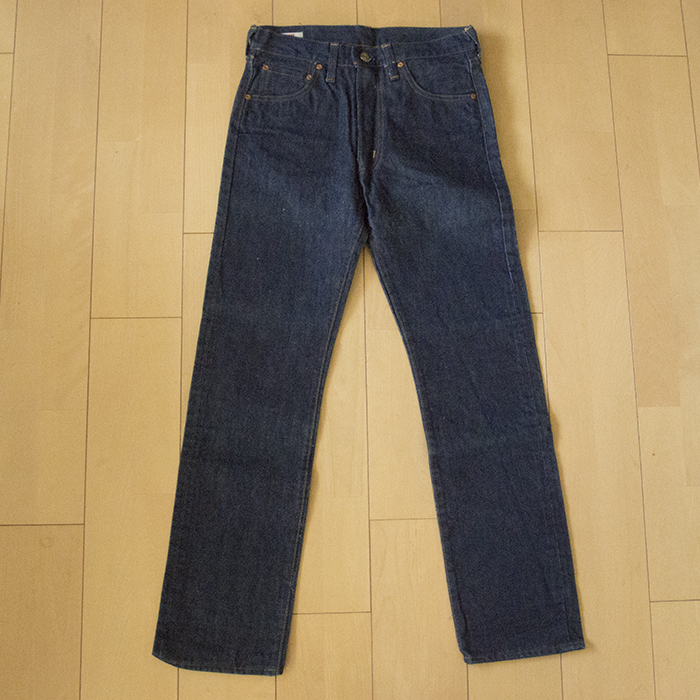 It's moderately straight, and while it's from the '60s, there's not much taper towards the hem. 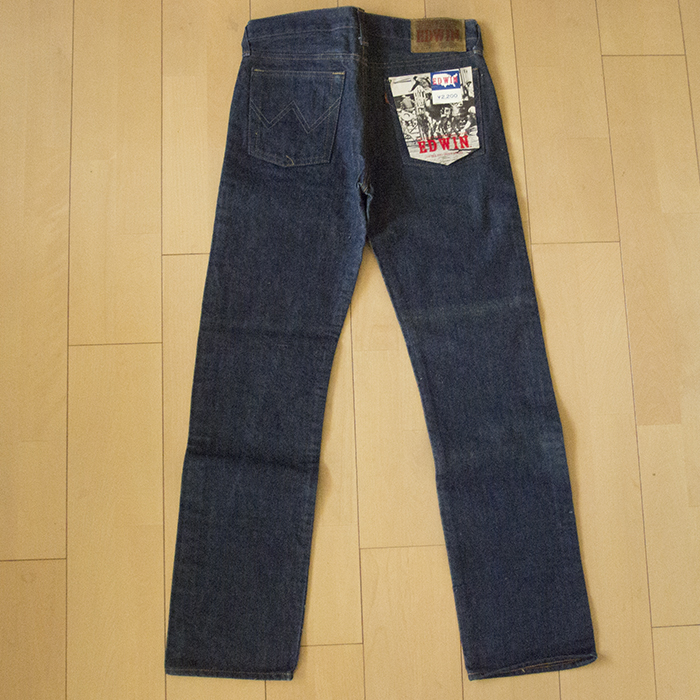 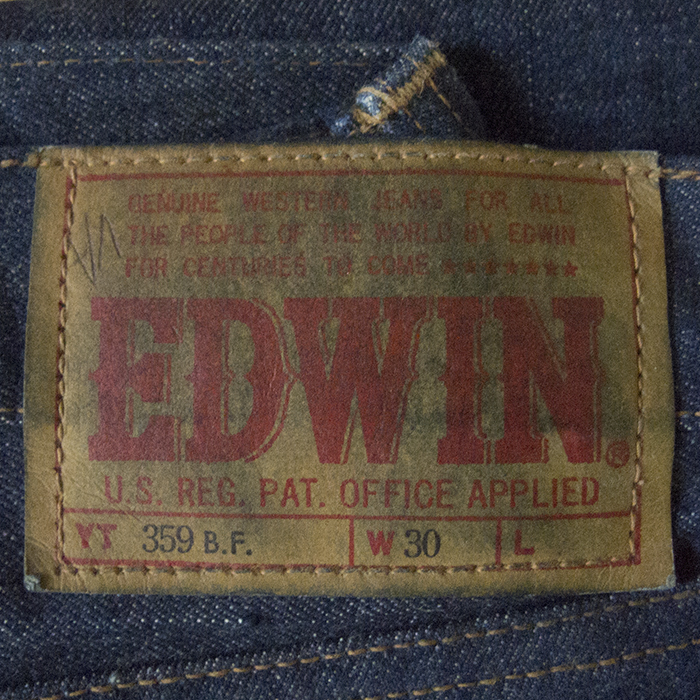 Indigo has been adhered to it because it has been washed. In addition to the EDWIN logo, the patch reads "GENUINE WESTERN JEANS FOR ALL THE PEOPLE OF THE WORLD BY EDWIN FOR CENTURIES TO COME". I think it was a pretty big deal at the time, but it's amazing that it's really become a global jeans brand. 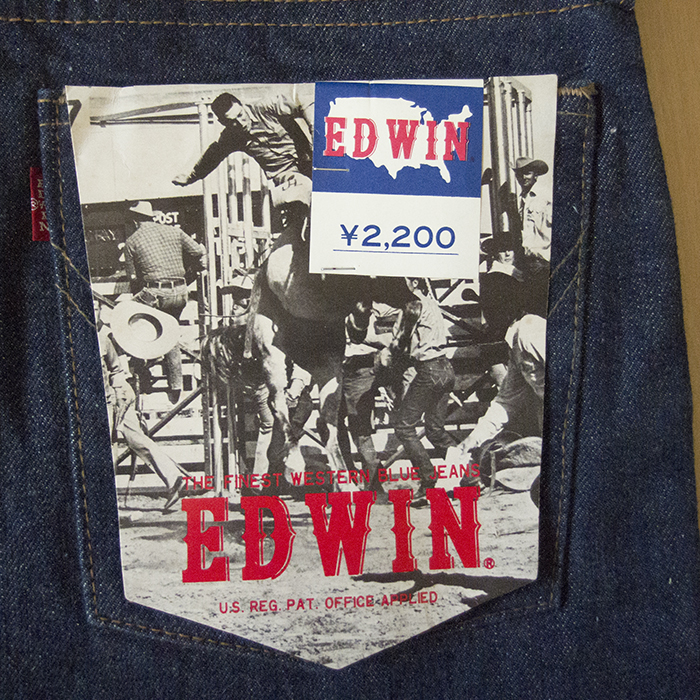 The "EDWIN" logo on a photo of a rodeo. The logo has an "R" mark next to it to indicate registered products, and the words "U.S. REG. PAT. OFFICE APPLIED" are below the logo. I wonder if it was already registered as a trademark in the United States. In addition to the paper patch, the words "WESTERN BLUE JEANS" can be seen here as well, suggesting the image of a western cowboy. In 1963, the starting salary of a college graduate was less than 20,000 yen, so the price of 2,200 yen must have been quite expensive for a daily-use clothing item. 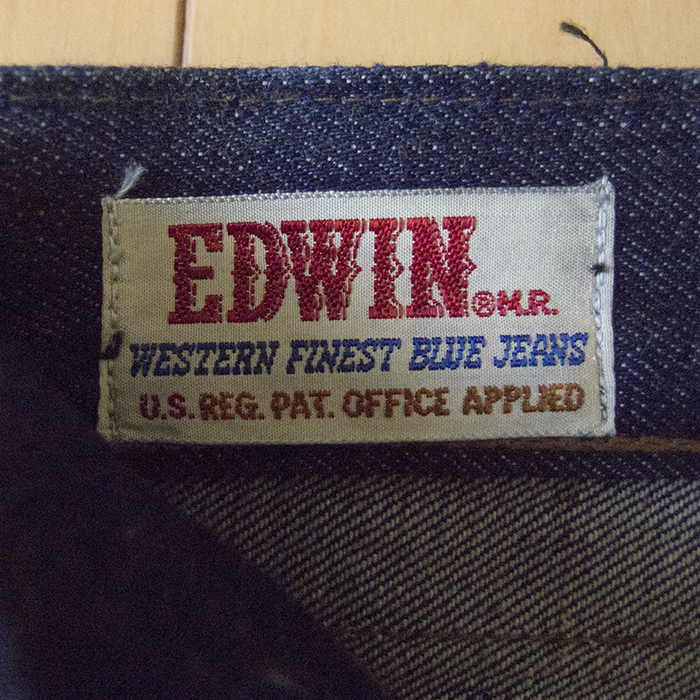 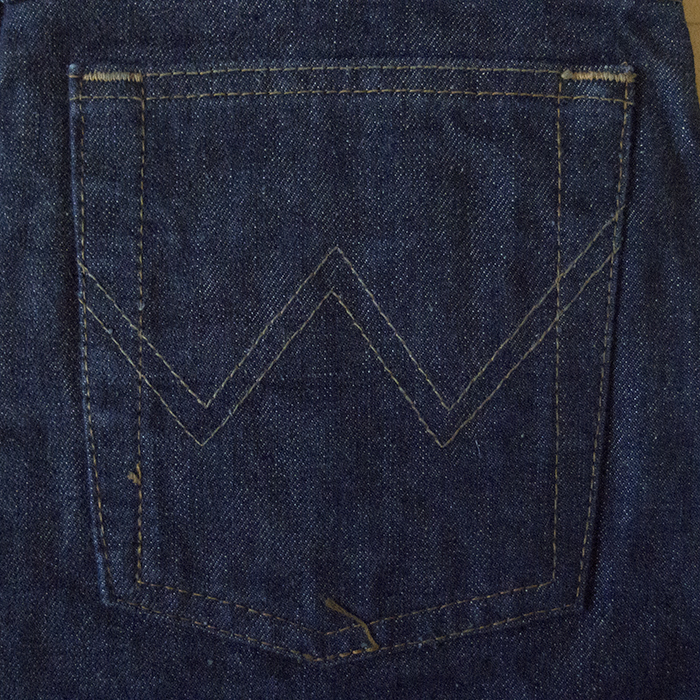 The stitching on the W is slightly upward, and the balance between the left and right sides is a little uneven. The stitching around the pocket is orange, while the W stitching is yellow. 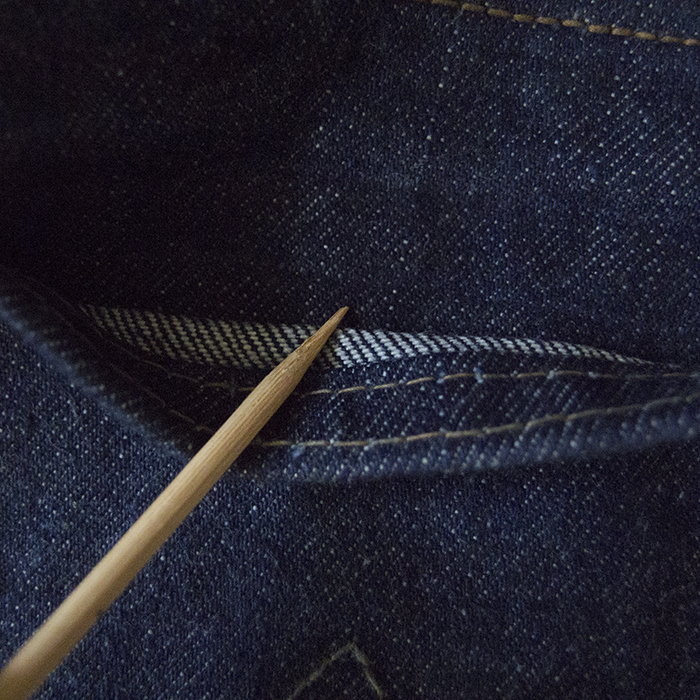 The back pocket lining is single stitched. 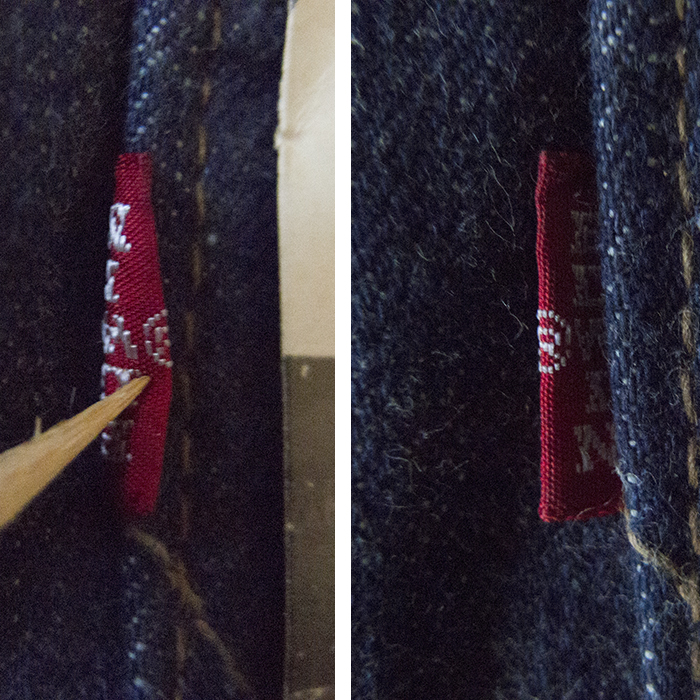 It's a little hard to see in the photo, but it's a double-sided tab with "EDWIN" embroidery. Like Levi's, it is attached to the left of the right pocket. 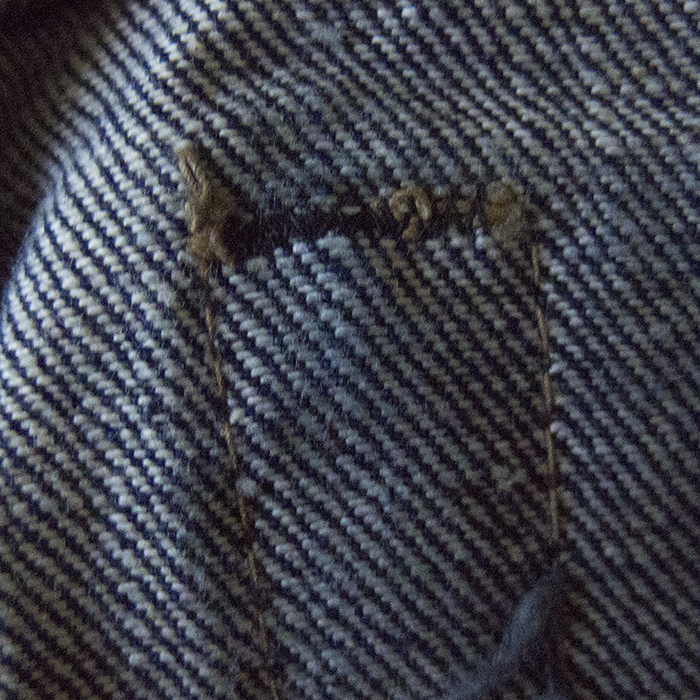 The back pocket is reinforced with bar tacks instead of hidden rivets.

Engraved, glossy buttons. The engraving reads "EDWIN S.F.CAL", but Edwin would not have been associated with San Francisco at the time. 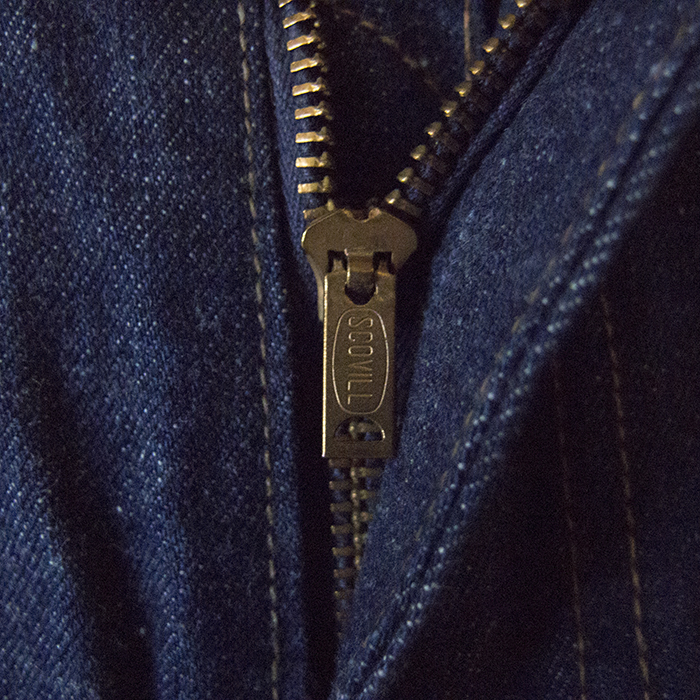 The zipper is a double clawed scoville.

Rounded button back with no engraving 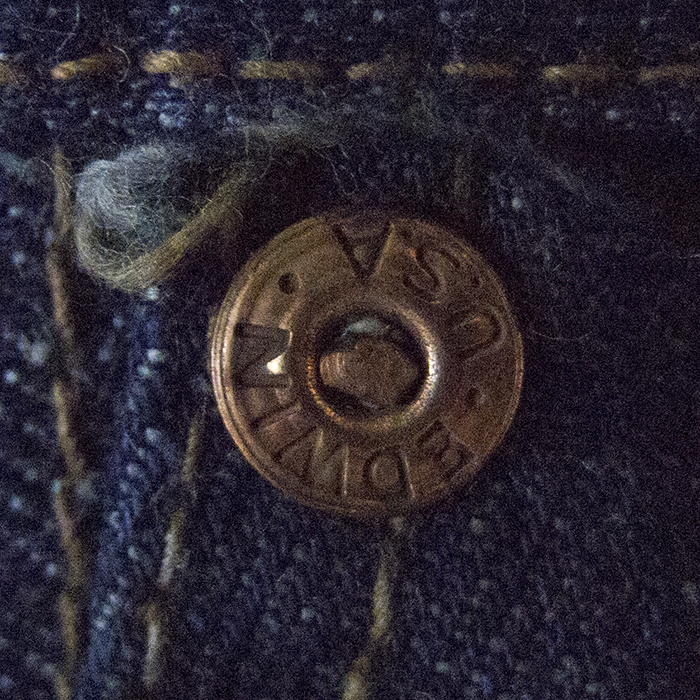 It is stamped with "EDWIN USA". 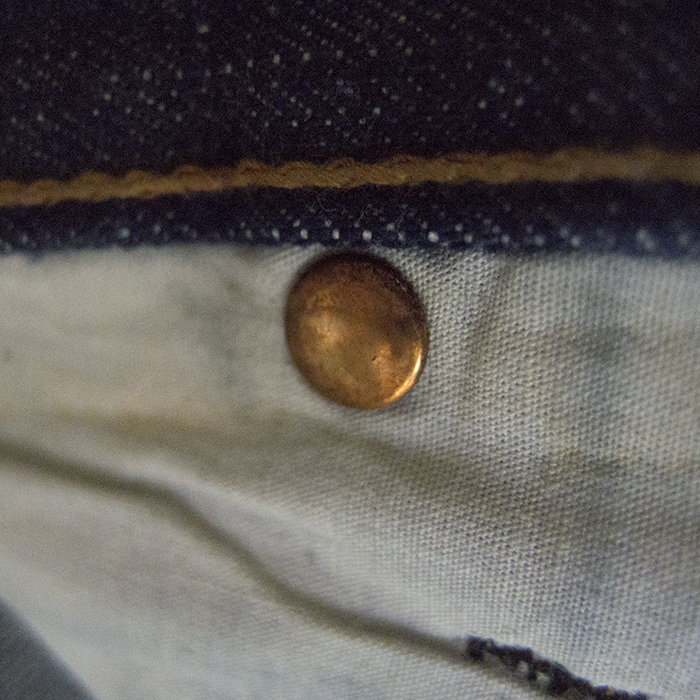 Copper-colored and rounded riveted back. 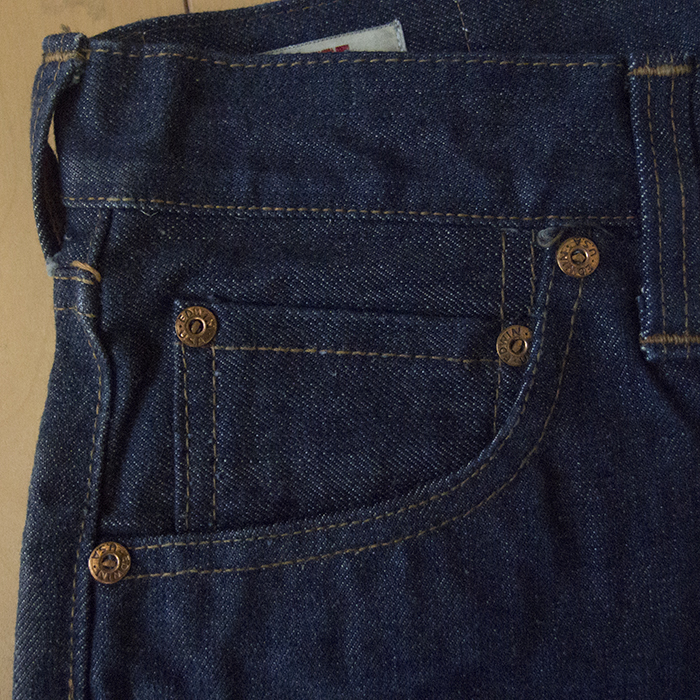 The fabric for the pockets and the fabric on the other side is used horizontally. 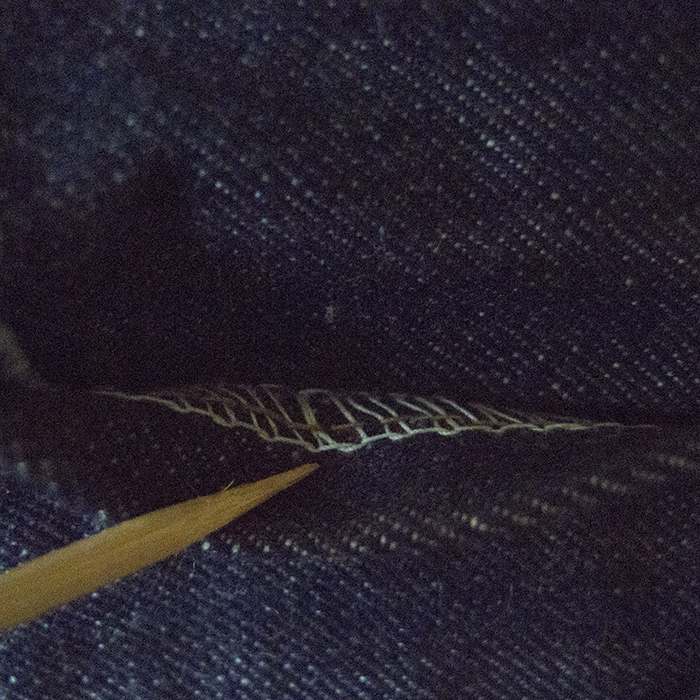 It seems that the selvedge is used in the reprinted version, but this one is locked with white thread. 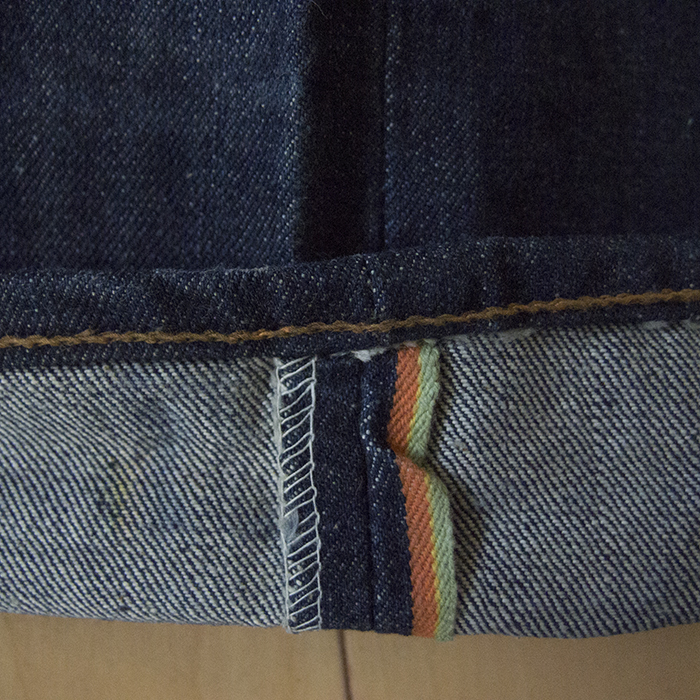 It's one se;lvedge and the selvedge is orange and green rainbow selvedges. The other side has a white lock on it, just like the back of the coin pocket. Chain stitching at the hem. 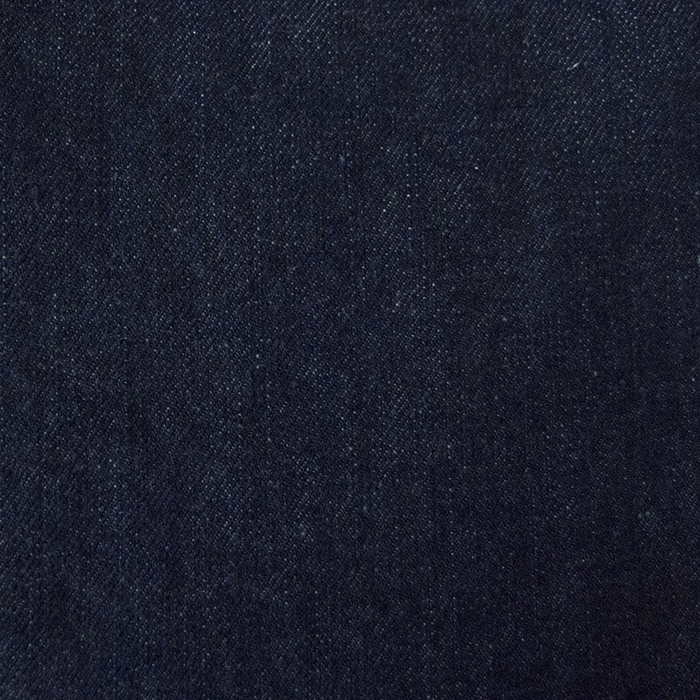 16oz fabric is used, so it has a pretty solid texture. In addition, there are some large weave scratches that seem to have been hit by the inspection nowadays. The overall color is dull, perhaps because it has faded a little.