M1002 model, which has been reprinted by Big John as their first jeans. On the website that introduces the reprinted version, the one of the same type is said to be a 1967 model, which means that it was produced at the same time as the transition from XX to BIG E in Levi's case. The fabric is imported from Cone Mills, but the sewing is not labeled as made in Japan, but it appears to have been done in Japan. 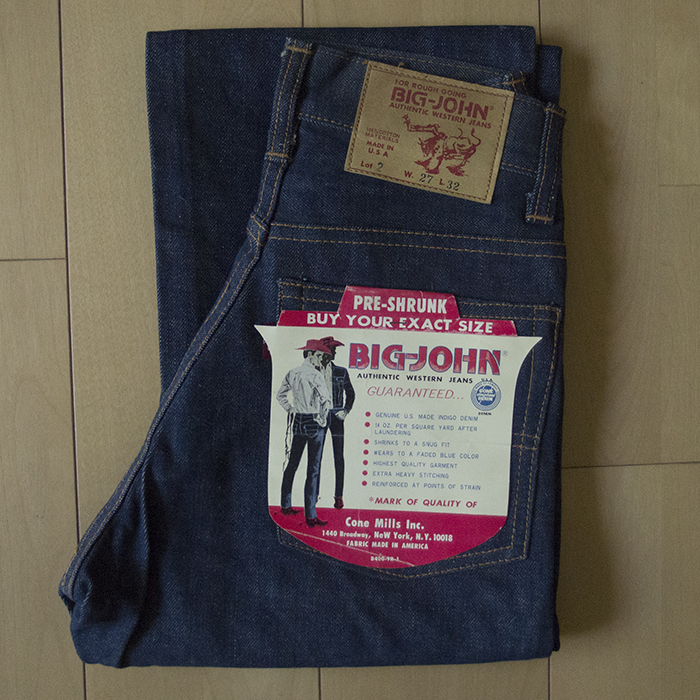 Large flasher and paper patch. The notation of "BUY YOUR EXACT SIZE" and "GUARANTEED" on the flasher seems to be influenced by the design of Levi's flasher and so on. 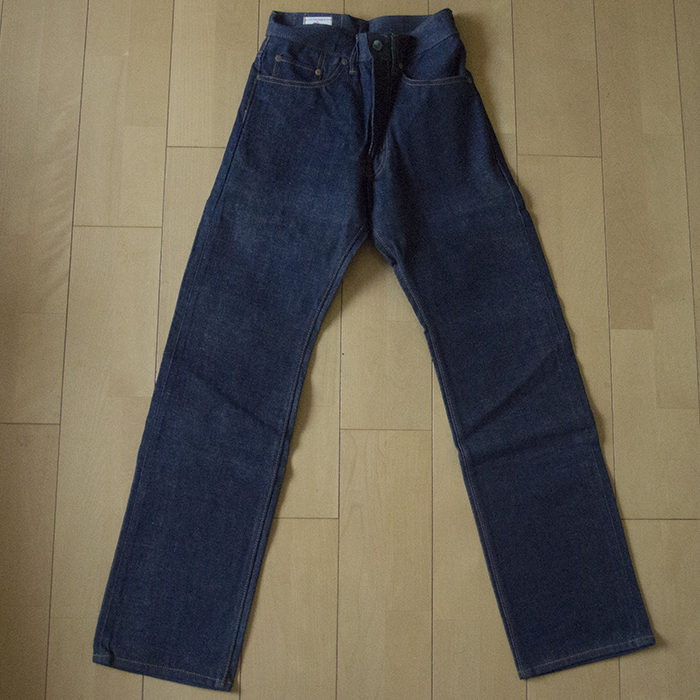 Many of the Japanese jeans from the old days were thin and straight, but this is a normal, thick straight. 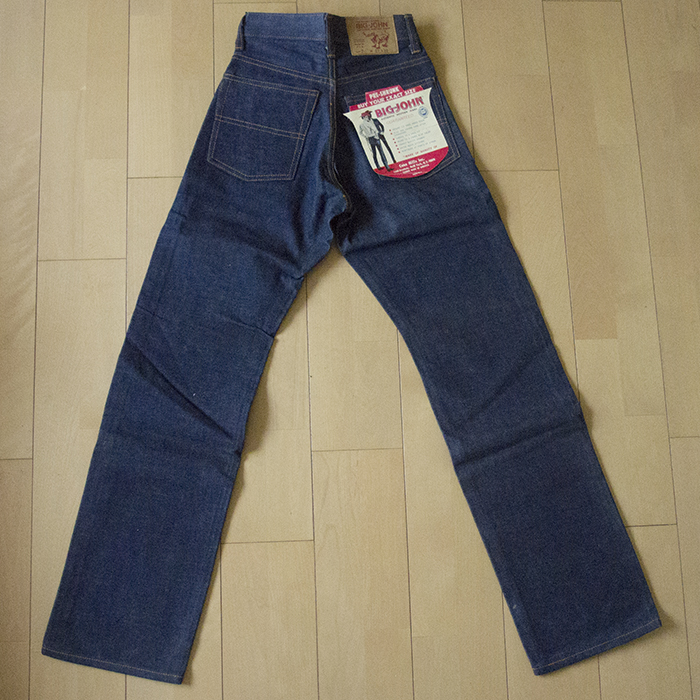 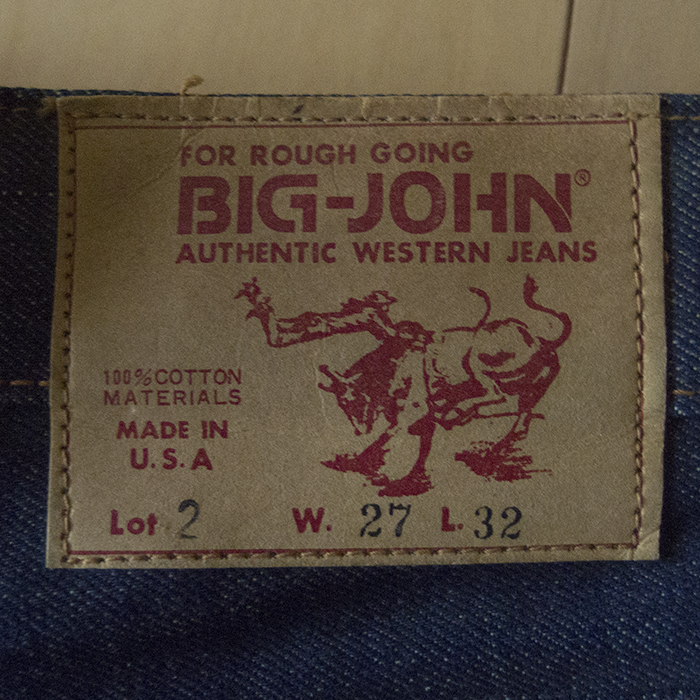 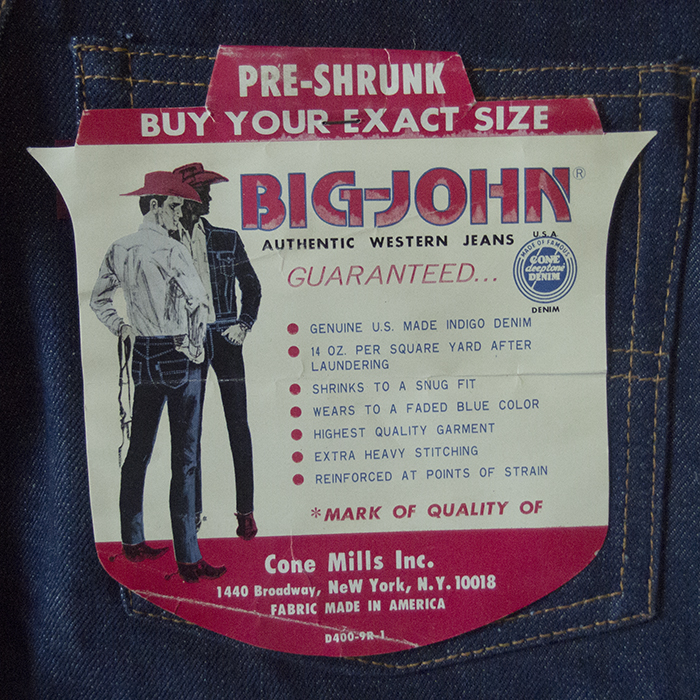 Big "BIG JOHN" logo. In addition, the "CONE deeptone DENIM" logo, which is often seen on the store brand's denim tags, is in the lower right hand corner. Also, there was a notation of "MADE IN U.S.A" on the paper patch, but on the flasher it was written "FABRIC MADE IN AMERICA", so it seems that the fabric was made in America. 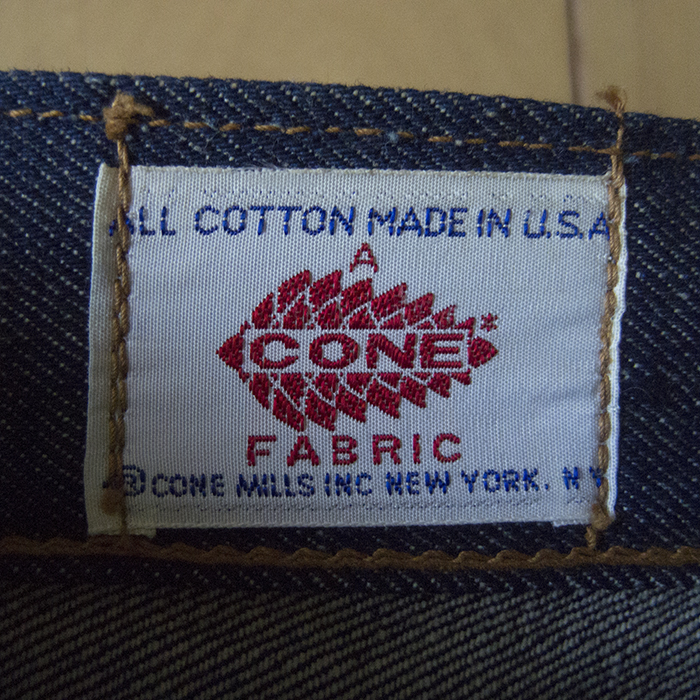 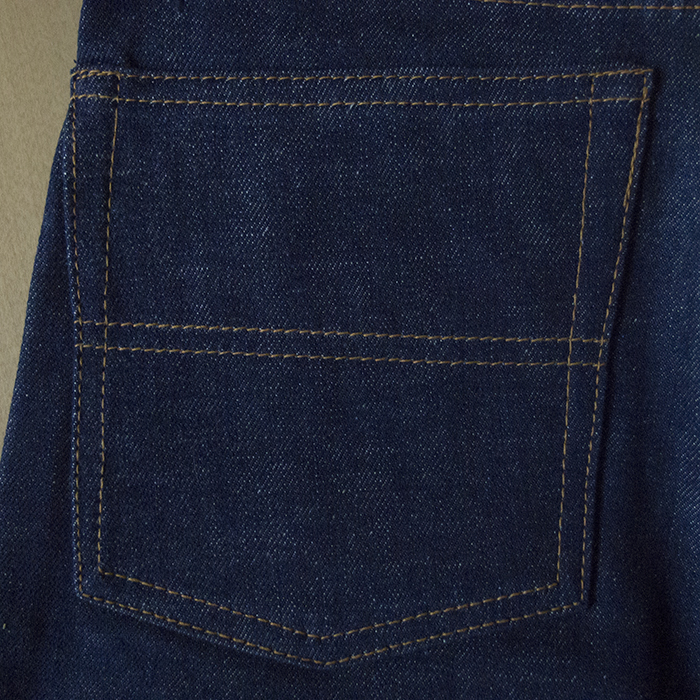 Single letter stitching as in the current Big John. Not only the pockets, all the stitching is orange stitch. 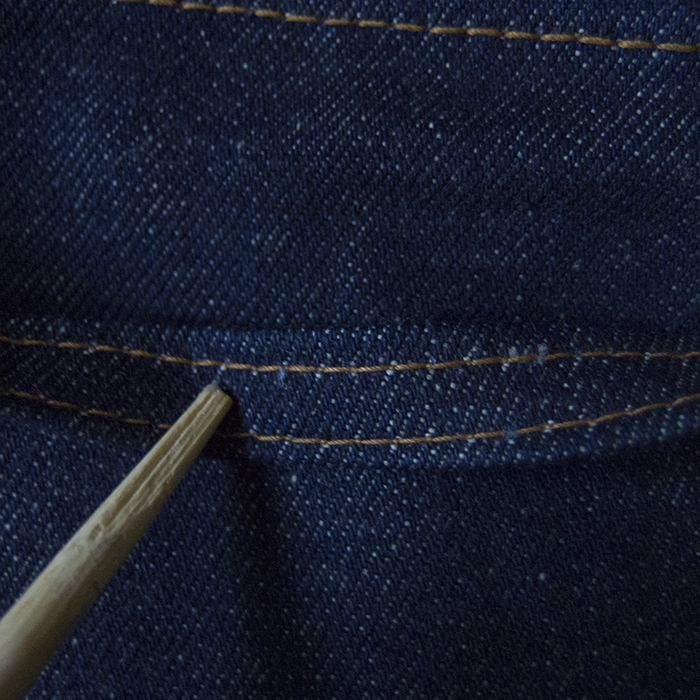 Single stitching on the back pocket as in Levi's at that time. 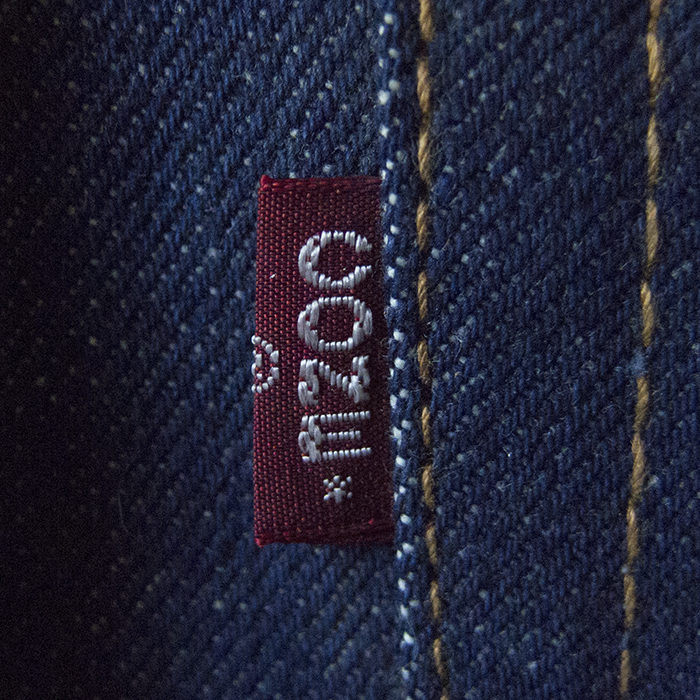 It has a red tab in the same position as the Levi's. What's interesting is that the word "CONE" is embroidered on it instead of "BIG JOHN". At the time, did they think it was better to put forward the fact that it was American corn mills (fabric) rather than the Big John brand? 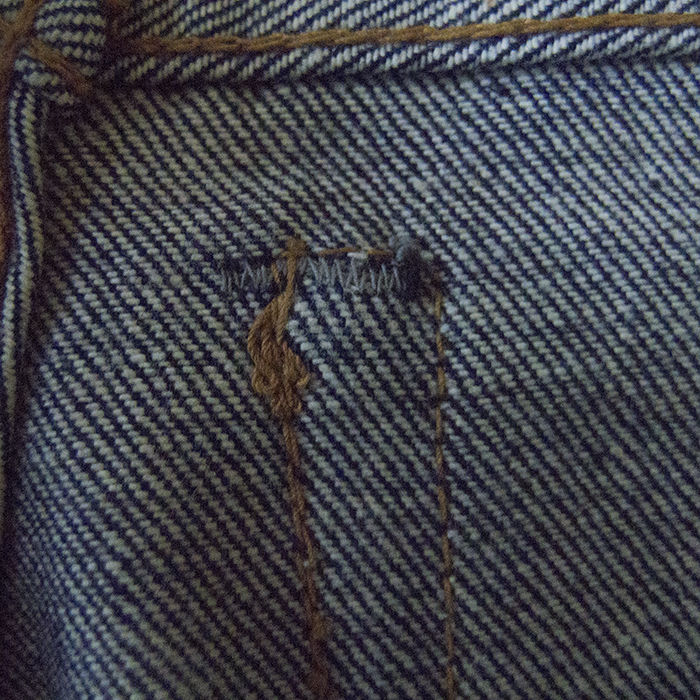 The back pocket is reinforced with bar tacks instead of hidden rivets.

Top button engraved with laurel. There is some blue rust on the surface, but it seems to be made of copper-plated iron because it also has a magnet. 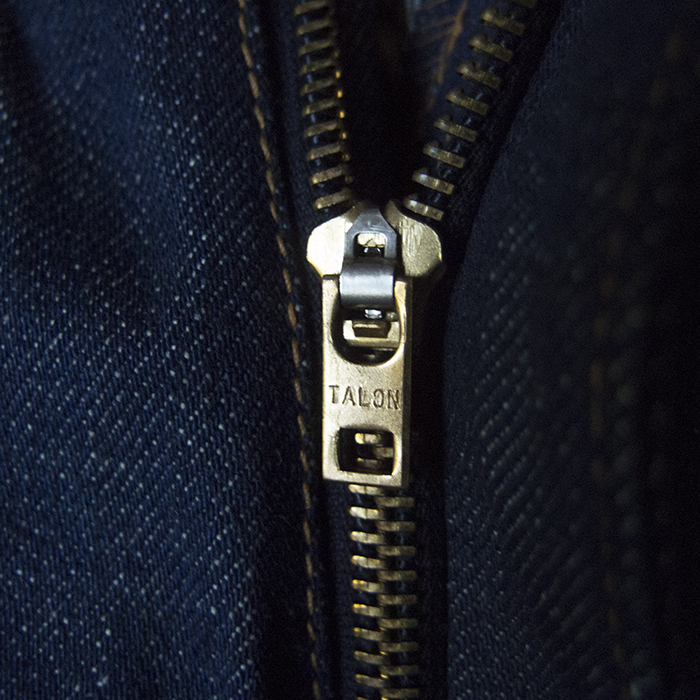 Unmarked and flat button back 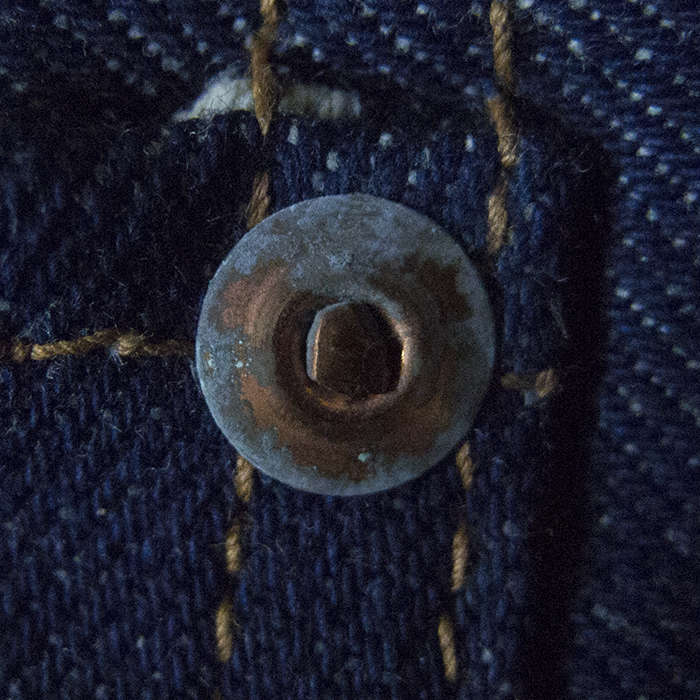 As with the top button, there is some blue rust, but the magnet reacts well, so it appears to be made of copper-plated iron. 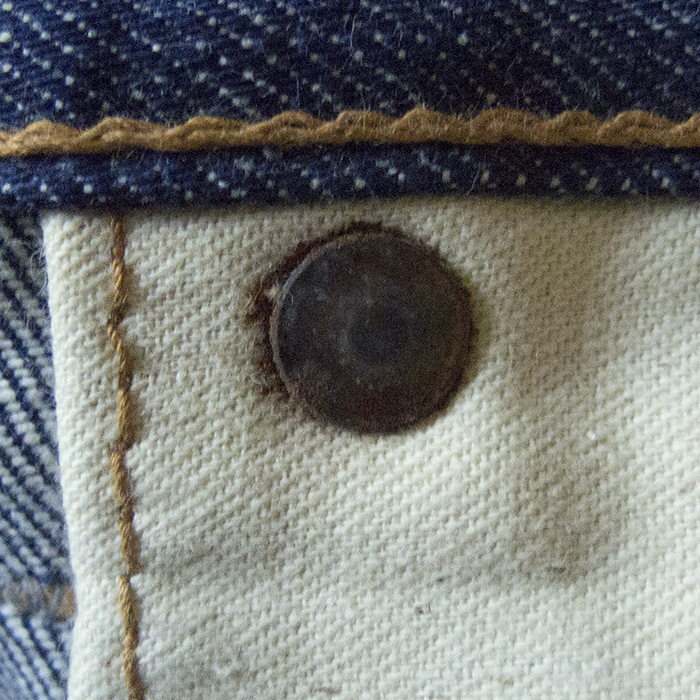 It appears to be made of copper-plated iron, like the rivet table. 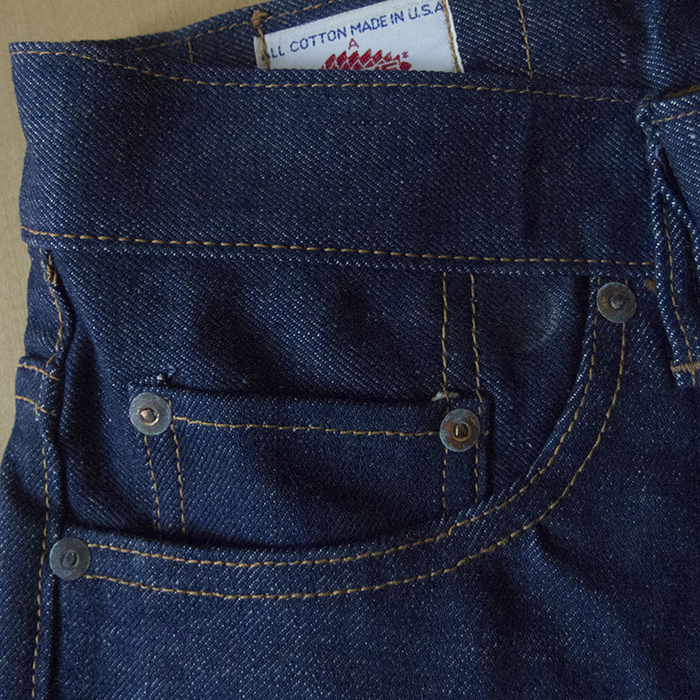 The coin pocket is also similar to the one of Levi's. The fabric of the pockets is used vertically and the opposite fabric is used horizontally. 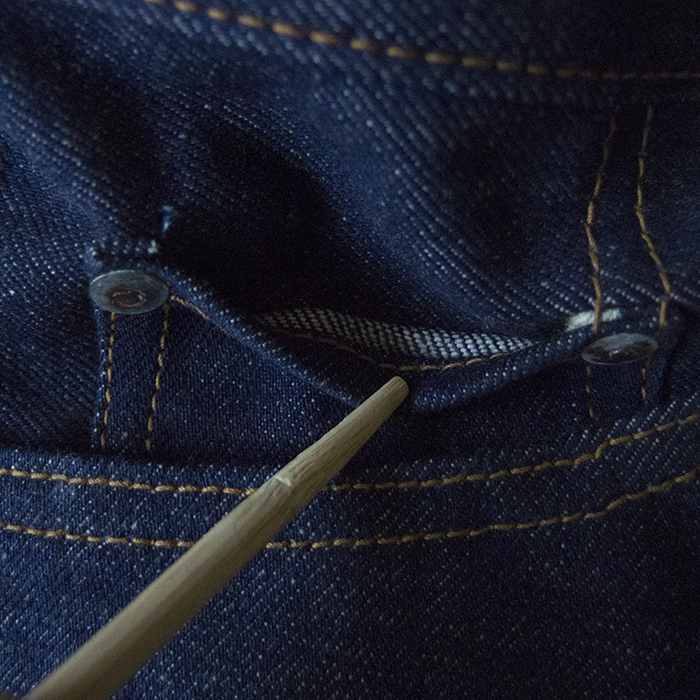 Single stitching, as with the late XX Levi's. On the far right, the ear part is used. 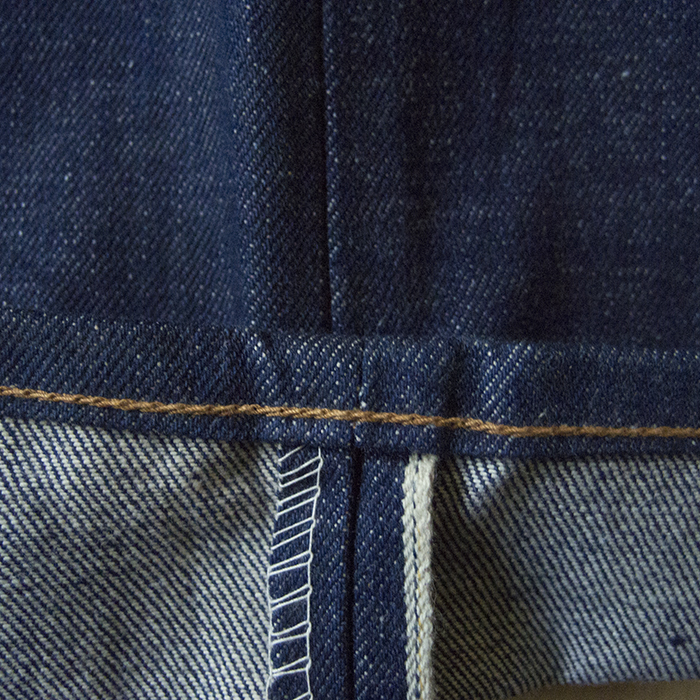 It has one selvedge, so to speak, and the color of the ear is blue. Chain stitching at the hem. 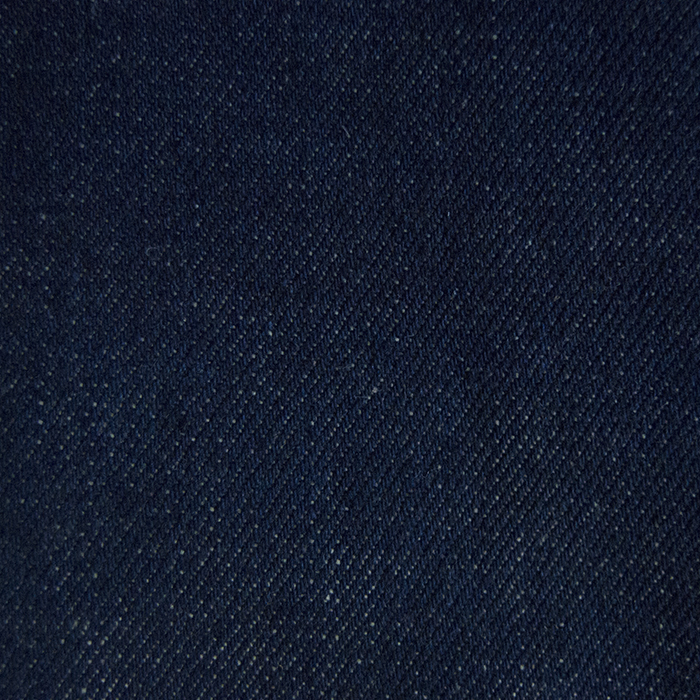 Combined with the information on the flasher, it's a 14oz right twill fabric. Compared to the Levi's at that time, the color is lighter and appears to be more bluish.