Five-pocket jeans by Big Fight, a Japanese brand of Two-Three Clothing. According to "History of Japanese Jeans" (Nihon Sen-i Shinbunsha), this brand was manufactured in the Bingo/Bitchu area (p. 53). I don't know the exact date of manufacture, but it seems to have been around the 1970s. Many of the denim made in Japan in those days were made in the United States and advertised as being made in the United States, but there is no indication on the flasher of the fabric used in the denim shown here, so it is possible that the denim shown here was made in Japan. The jeans shown here may be made in Japan. The overall impression is that they are very seriously made straight jeans, including the fabric. Many Japanese jeans at that time used thicker threads for sewing, but these jeans have no such feature. 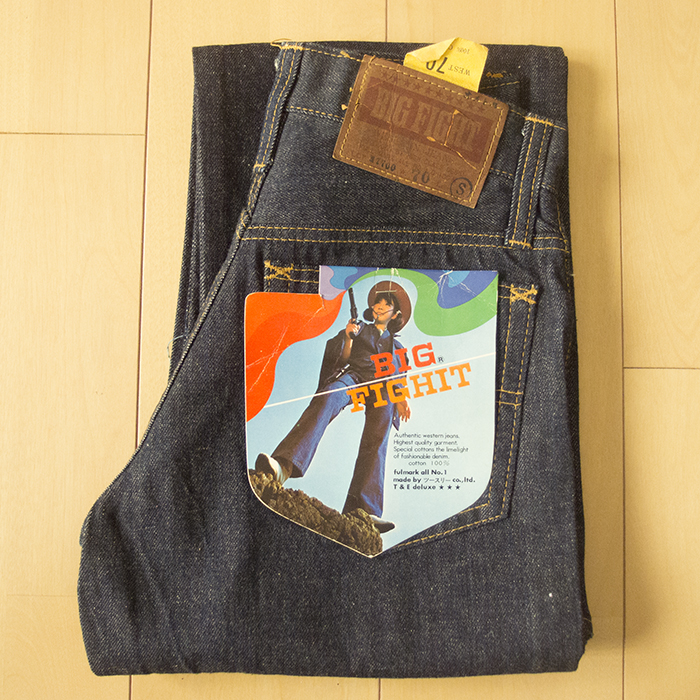 Dead stock with flasher and tag. A lot of domestic jeans are one-washed, but these look like they have not been washed. 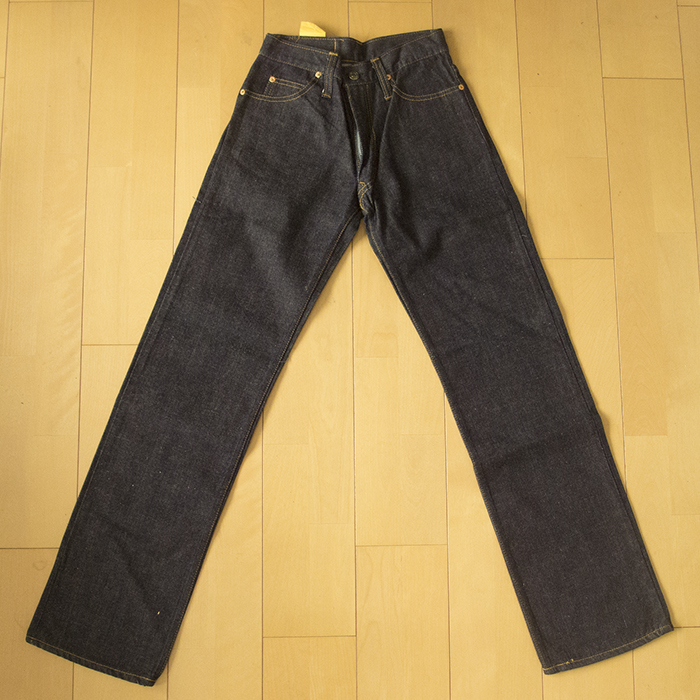 The silhouette is thicker than other jeans made in Japan at that time. The inseam is a little shallow for Japanese jeans. 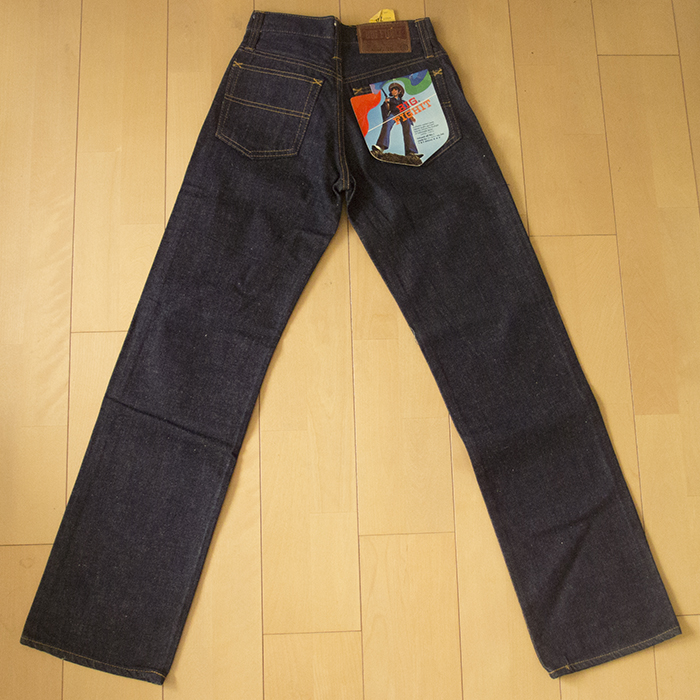 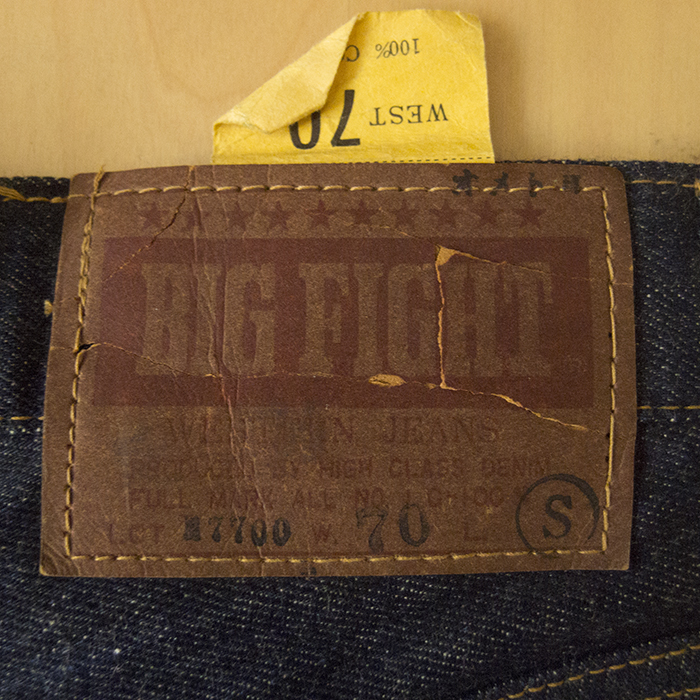 A paper patch that has already been cracked. Lot number, size, etc. stamped on it. There is also a stamped "Ometo" in the upper right corner, but the meaning is unknown. A paper patch is also attached to the patch and a paper tag with the waist size. 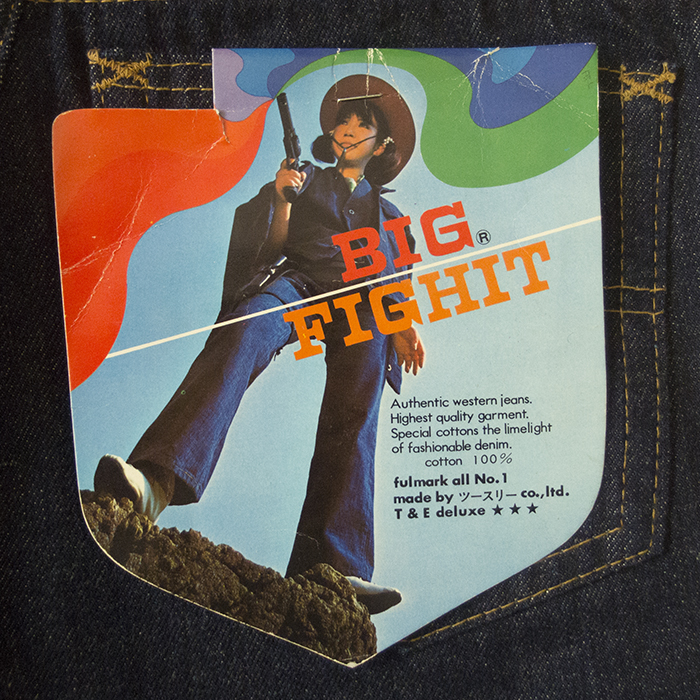 A large flasher. It is quite impressive nowadays, with a Japanese woman in a western hat, denim jacket, and bootcut holding what looks like a pistol on a rock. It's "FIGHT" on the paper patch but "FIGHIT" on the flasher. 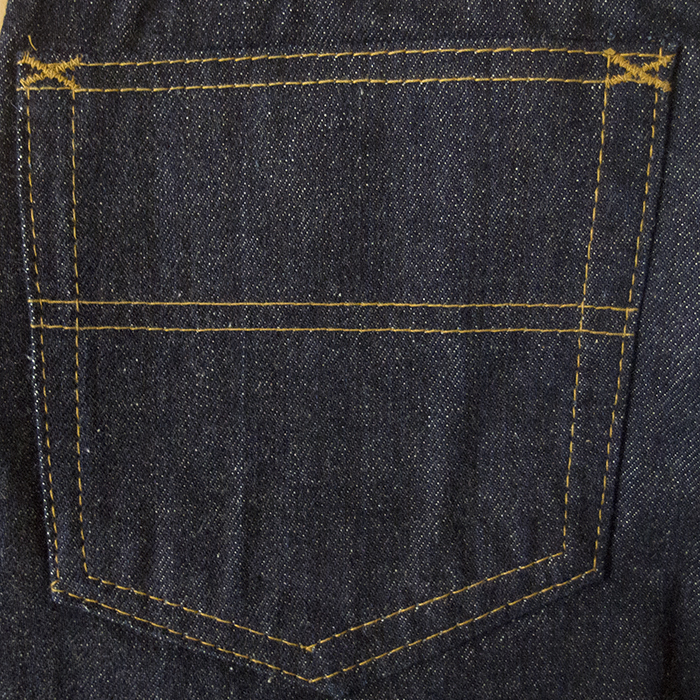 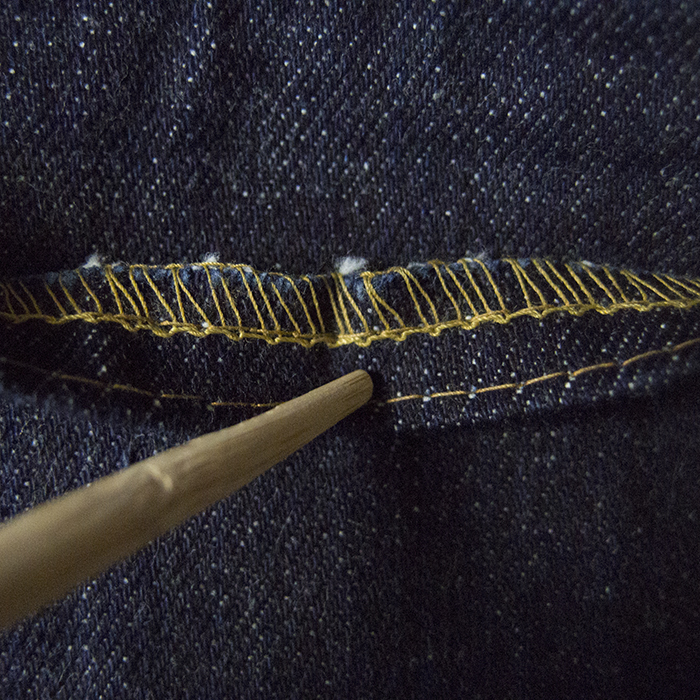 "MENS WORLD" engraved toff button. I suspect it is not unique to the brand, but a generic one. 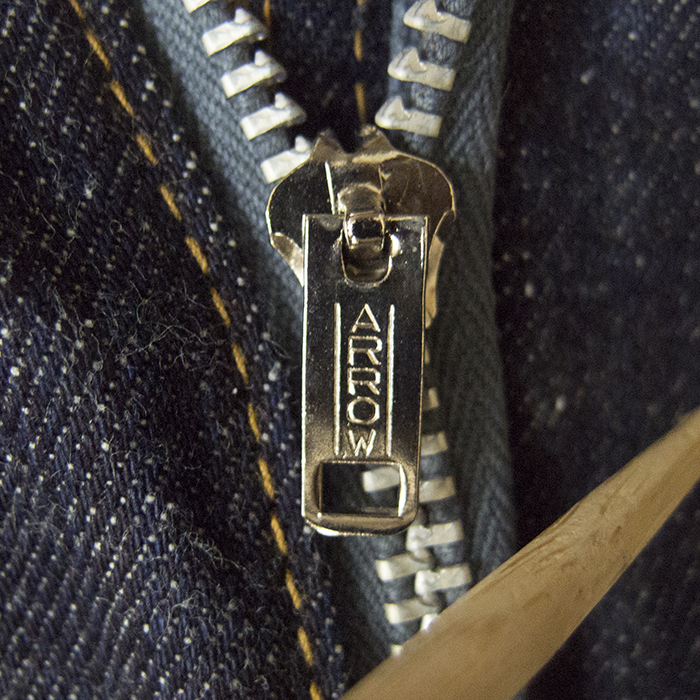 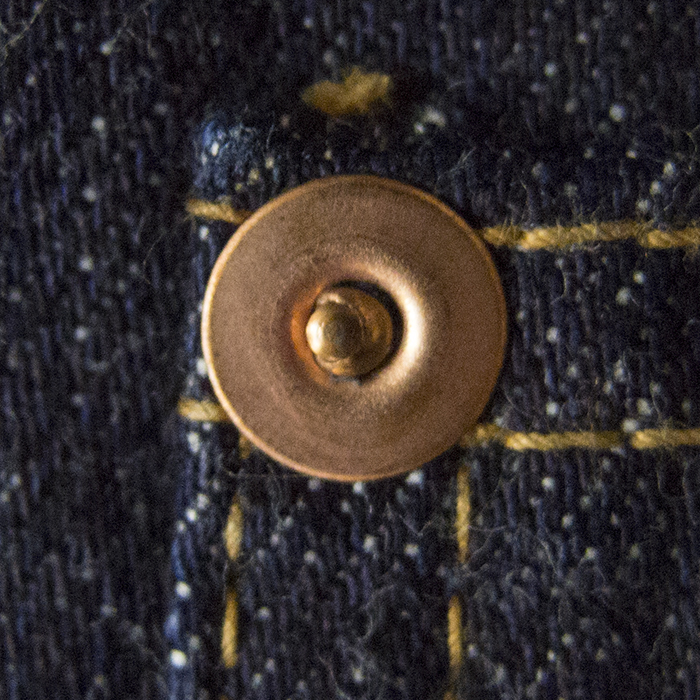 Unmarked rivets similar in shape to LEE rivets are used. 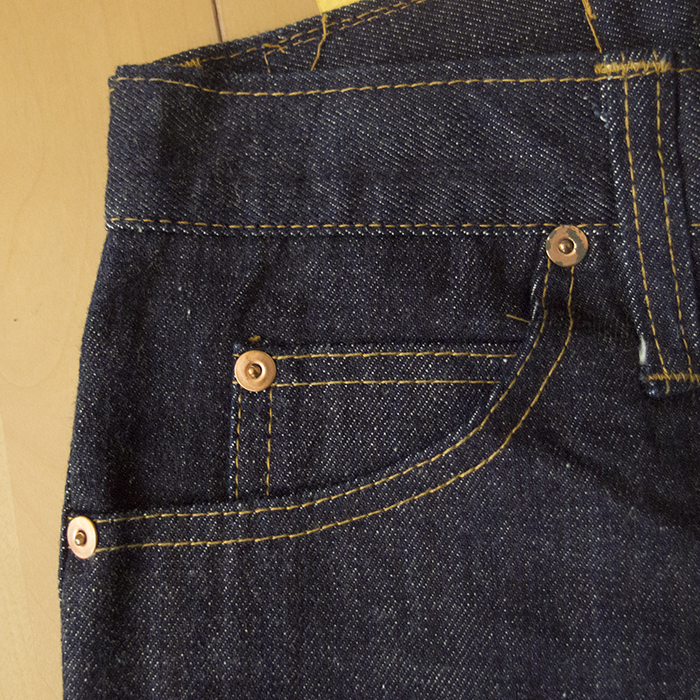 The coin pocket is also treated like LEE's. Looking at this photo alone, it's hard to distinguish it from LEE's. 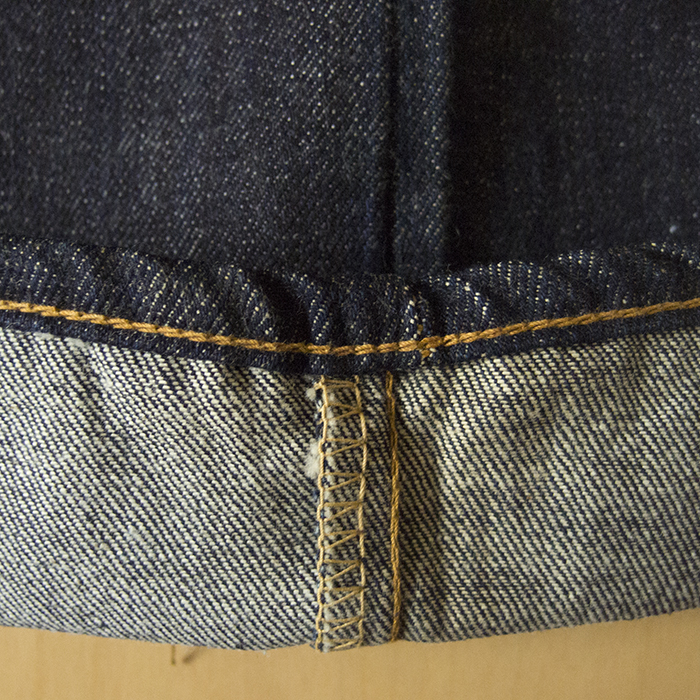 Locked and folded stitching. The hem is chain stitched, and although it is covered in glue, it has already begun to swell with moisture absorption over time. 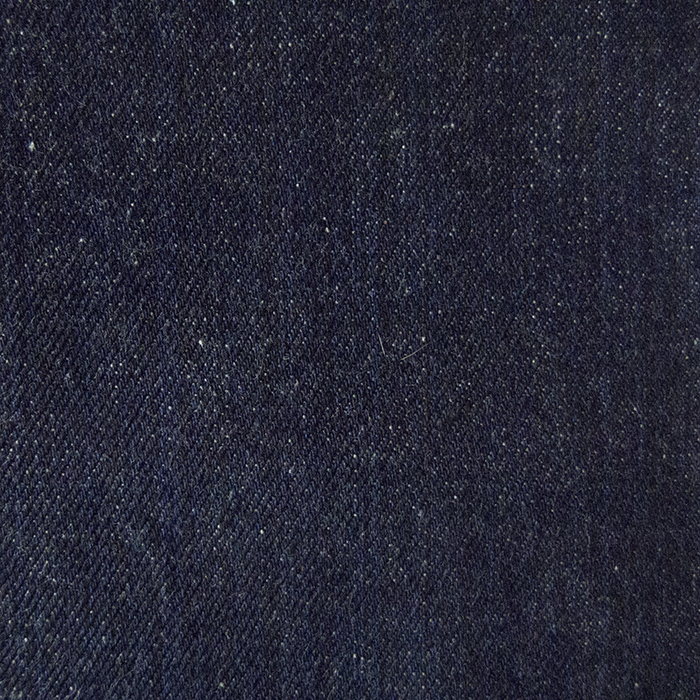 The fabric may have been made of a slightly lighter ounce, with a darker color for a fabric from the 70s. It is possible that some sulfide dyes may have been used, but there is a deep bluish tinge to this fabric, and it is a vintage fabric that is pleasing to look at. The slubby look is not so strong and there are not many neps.